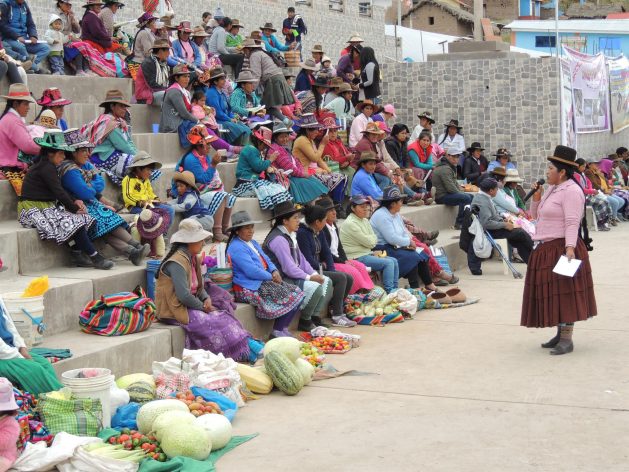 Yolanda Flores, an Aymara indigenous woman, speaks to other women engaged in small-scale agriculture, gathered in her village square in the highlands of Peru's southern Andes. She is convinced that participating in local decision-making spaces is fundamental for rural women to stop being invisible and to gain recognition of their rights. Credit: Courtesy of Yolanda Flores

LIMA, Oct 12 2018 (IPS) - Rural women in Latin America play a key role with respect to attaining goals such as sustainable development in the countryside, food security and the reduction of hunger in the region. But they remain invisible and vulnerable and require recognition and public policies to overcome this neglect.

There are around 65 million rural women in this region, and they are very diverse in terms of ethnic origin, the kind of land they occupy, and the activities and roles they play. What they have in common though is that governments largely ignore them, as activists pointed out ahead of the International Day of Rural Women, celebrated Oct. 15.

"They play key roles and produce and work much more than men. In the orchards, in the fields, during planting time, they raise the crops, take care of the farm animals, and disproportionately carry the workload of the house, the children, etc., but they don't see a cent." -- JulioBerdegué

“The state, whether local or national authorities, neglect us,” Yolanda Flores, an Aymara woman, told IPS. “They only think about planting steel and cement. They don’t understand that we live off agriculture and that we women are the most affected because we are in charge of the food and health of our families.”

Flores, who lives in Iniciati, a village of about 400 indigenous peasant families in the department of Puno in Peru’s southern Andes, located more than 3,800 metres above sea level, has always been dedicated to growing food for her family.

On the land she inherited from her parents she grows potatoes, beans and grains like quinoa and barley, which she washes, grinds in a traditional mortar and pestle, and uses to feed her family. The surplus is sold in the community.

“When we garden we talk to the plants, we hug each potato, we tell them what has happened, why they have become loose, why they have worms. And when they grow big we congratulate them, one by one, so our food has a lot of energy when we eat. But people don’t understand our way of life and they forget about small farmers,” she said.

Like Flores, millions of rural women in Latin America face a lack of recognition for their work on the land, as well as the work they do maintaining a household, caring for the family, raising children, or caring for the sick and elderly.

The United Nations Food and Agriculture Organisation (FAO) urges governments in the region to assume a commitment to reverse the historical disadvantages faced by this population group which prevent their access to productive resources, the enjoyment of benefits and the achievement of economic autonomy.

“Depending on the country, between two-thirds and 85 percent of the hours worked by rural women is unpaid work,” Julio Berdegué, FAO regional representative for Latin America and the Caribbean, told IPS. 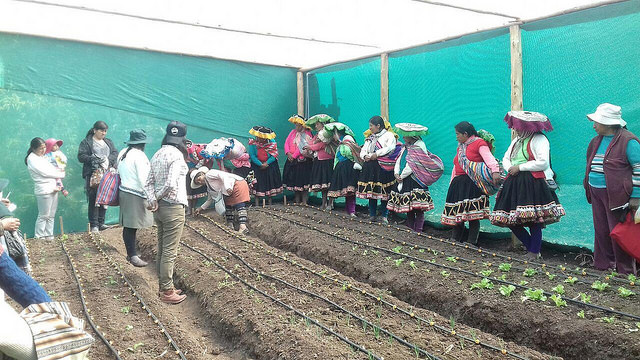 Women engage in subsistence agriculture at more than 3,300 metres above sea level in the highlands of the southern department of Cuzco, in the Andes of Peru, in the municipality of Cusipata. With the support of nongovernmental organisations, they have built greenhouses that allow them to produce a range of vegetables despite the inclement weather. Credit: Janet Nina/IPS

Berdeguè, who is also deputy director general of FAO, deplored the fact that they do not receive payment for their hard work in agriculture – a workload that is especially heavy in the case of heads of families who run their farms, and during growing season.

María Elena Rojas, head of the FAO office in Peru, told IPS that if rural women in Latin American countries had access to land tenure, financial services and technical assistance like men, they would increase the yield of their plots by 20 to 30 percent, and agricultural production would improve by 2.5 to 4 percent.


That increase would help reduce hunger by 12 to 15 percent. "This demonstrates the role and contribution of rural women and the need for assertive public policies to achieve it and for them to have opportunities to exercise their rights. None of them should go without schooling, healthy food and quality healthcare. These are rights, and not something impossible to achieve," she said.

“They play key roles and produce and work much more than men,” the official said from FAO’s regional headquarters in Santiago. “In the orchards, in the fields, during planting time, they raise the crops, take care of the farm animals, and disproportionately carry the workload of the house, the children, etc., but they don’t see a cent.”

“We say: we want women to stay in the countryside. But for God’s sake, why would they stay? They work for their fathers, then they work for their husbands or partners. That’s just not right, it’s not right!” exclaimed Berdegué, before stressing the need to stop justifying that rural women go unpaid, because it stands in the way of their economic autonomy.

He explained that not having their own income, or the fact that the income they generate with the fruit of their work is then managed by men, places rural women in a position of less power in their families, their communities, the market and society as a whole.

“Imagine if it was the other way around, that they would tell men: you work, but you will not receive a cent. We would have staged a revolution by now. But we’ve gotten used to the fact that for rural women that’s fine because it’s the home, it’s the family,” Berdegué said.

The FAO regional representative called on countries to become aware of this reality and to fine-tune policies to combat the discrimination.

A global workload greater than that of men, economic insecurity, reduced access to resources such as land, water, seeds, credit, training and technical assistance are some of the common problems faced by rural women in Latin America, whether they are farmers, gatherers or wage-earners, according to the Atlas of Rural Women in Latin America and the Caribbean, published in 2017 by FAO.

But even in these circumstances, they are protagonists of change, as in the growth of rural women’s trade unions in the agro-export sector. 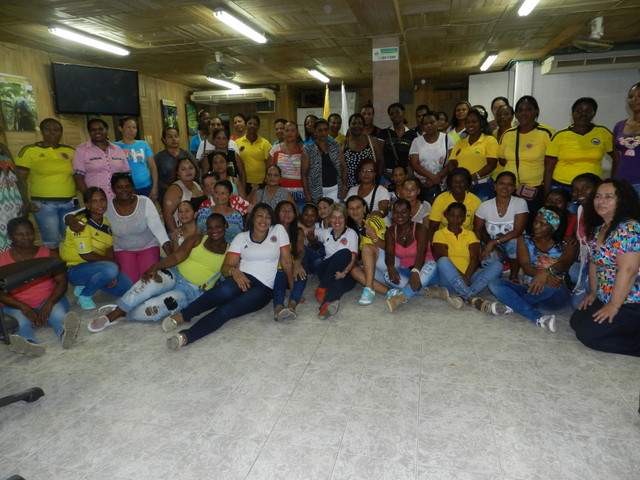 Afro-descendant Adela Torres (white t-shirt, L-C, front), secretary general of the National Union of Agricultural Industry Workers (Sintrainagro) in the banana region of Urabá, in the Colombian department of Antioquia, sits on the floor during a meeting of women members of the union. Credit: Courtesy of Sintrainagro

With the increased sale of non-traditional products to international markets, such as flowers, fruit and vegetables, women have swelled this sector, says another regional study, although often in precarious conditions and with standards that do not ensure decent work.

But trade unions are fighting exploitative labour conditions. A black woman from Colombia, Adela Torres, is an example of this struggle.

Since childhood and following the family tradition, she worked on a banana farm in the municipality of Apartadó, in Urabá, a region that produces bananas for export in the Caribbean department of Antioquia.

Now, the 54-year-old Torres, who has two daughters and two granddaughters, is the secretary general of the National Union of Agricultural Industry Workers (Sintrainagro), which groups workers from 268 farms, and works for the insertion of rural women in a sector traditionally dominated by men.

“When women earn and manage their own money, they can improve their quality of life,” she told IPS in a telephone conversation from Apartadó.

Torres believes that women’s participation in banana production should be equitable and that their performance deserves equal recognition.

“We have managed to get each farm to hire at least two more women and among the achievements gained are employment contracts, equal pay, social security and incentives for education and housing for these women,” she explained.

She said rural women face many difficulties, many have not completed primary school, are mothers too early and are heads of households, have no technical training and receive no state support.

In spite of this, they work hard and manage to raise their children and get ahead while contributing to food security.

Making the leap to positions of visibility is also a challenge that Flores has assumed in the Andes highlands of Puno, to fight for their proposals and needs to be heard.

“We have to win space in decision-making and come in as authorities; that is the struggle now, to speak for ourselves. I am determined and I am encouraging other women to take this path,” Flores said.

Faced with the indifference of the authorities, more action and a stronger presence is the philosophy of Flores, as her grandmother taught her, always repeating: “Don’t be lazy and work hard.” “That is the message and I carry it in my mind, but I would like to do it with more support and more rights,” she said.

With reporting by Orlando Milesi in Santiago.