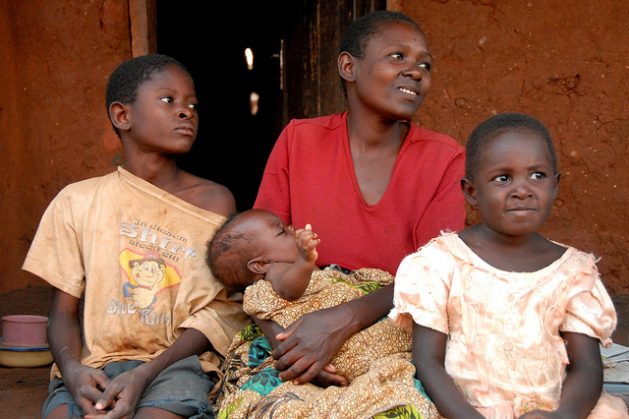 Manes Feston, flanked by her children, holds her four-month-old son Fedson. He was one of triplets but his siblings died because of a lack of welfare support. High fertility rates can be seen in much of Africa with four or more births per woman. Generally, these countries are poorer with limited access to quality healthcare and contraception. Credit: Travis Lupick/IPS

UNITED NATIONS, Oct 21 2018 (IPS) - Reproductive choice can transform the world and our goals towards a sustainable society, a new report says.

Every year, the United Nations Population Fund (UNFPA) examines the state of the world population. In this year’s report, the agency focuses on the power of reproductive choice and the role it can play to promote social and economic development.

“It can rapidly improve the well-being of women and girls, transform families, and accelerate global development,” she added.

While progress has been achieved, the international community still has a ways to go, UNFPA’s Washington D.C. director Sarah Craven told IPS.

“There is no country in the world where reproductive rights and choices are enjoyed by all people at all times,” she said.

The State of the World Population 2018 report examines global fertility trends and how they are influenced by choice or the lack thereof.

High fertility rates can be seen in much of Africa with four or more births per woman.

Generally, these countries are poorer with limited access to quality healthcare and contraception.

UNFPA found that over 20 percent of women in the region want to avoid a pregnancy but have an unmet need for family planning.

At the same time, almost 20 million—or 38 percent—of the region’s pregnancies each year are unintended.

Practices such as early marriage, which is associated to an early start to child bearing, is also common.

Child marriage, which is accompanied with the end of education and the lack of opportunities for employment and thus reduced earnings in adulthood, denies girls’ decision-making power and their right to choose.

It also hinders progress on the Sustainable Development Goals (SDGs) such as the elimination of poverty, achievement of good health and well-being, and access to decent work.

Countries with high fertility have faster population growth, which poses challenges for governments already struggling to make progress on the SDGs and to provide education, healthcare, and employment opportunities.

On the other hand, while there are trends towards lower birth rates as a result of greater access to services, some women are having fewer children due to constraints rather than choice.

“The gap between desired and actual family size suggests that women and men are not fully able to realise their reproductive rights,” the report states.

For instance, the culture of overwork in East Asia has made it difficult for many to have both a career and a family.

In South Korea, almost 20 percent of employed women worked more than 54 hours a week in 2014.

The East Asian nation has a fertility rate of 1.17 births per woman, below the recommended replacement level of 2.1 and the level needed to sustain the current size of the population.

In Japan, which also has concerning fertility levels, the demanding work environment has even led to “karoshi,” or death by overwork.

In 2013, journalist Miwa Sado died of a heart failure and investigators found that she had logged 159 hours of overtime work one month before she died.

In an effort to address this problem, both countries have started to put policies in place to restrict work hours.

However, women with children also often face discrimination in the labour market, which can be seen in countries such as South Korea and Japan where mothers predominately hold low-salary positions and have limited career options, resulting in vast gender wage gaps.

With fewer children and young adults, the labour force has been shrinking contributing to weaker economies.

Among the recommendations in the report is to provide universal access to quality reproductive healthcare, including access to modern contraceptives, make available sexuality education, and achieve gender equality.

“Choice can be a reality everywhere. This is something that governments should prioritise,” Craven told IPS.

In high fertility countries, there is a need for education on reproductive rights and employment opportunities for rural women while low fertility countries should implement family-friendly policies such as child care services and parental leave.

Questions and challenges remain as to how governments should achieve such policies as the debate over reproductive choice in many countries is often grounded in religious beliefs.

In the United States, a new set of proposed rules will expand religious exemptions, allowing employers to deny health care access such as reproductive health coverage and access to contraception.

In Saudi Arabia, child marriage is still widespread and often justified by clerics.

Craven expressed concern over any policy that restricts individuals to access information and services, and highlighted the importance of reproductive choice.

“You will not achieve the SDGs if you don’t also achieve reproductive rights of your citizens,” she said.

Kanem echoed similar sentiments in the foreword of the report, stating: “The way forward is the full realisation of reproductive rights, for every individual and couple, no matter where or how they live, or how much they earn…the real measure of progress is people themselves: especially the well-being of women and girls, their enjoyment of their rights and full equality, and the life choices that they are free to make.”