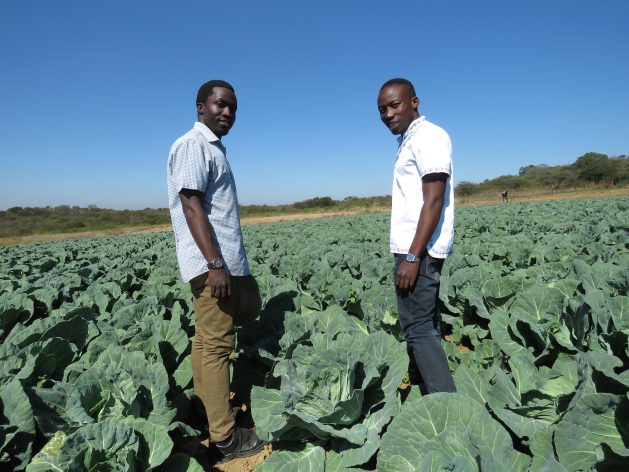 WAGENINGEN, The Netherlands, Nov 8 2018 (IPS) - At every conference she has attended on the youth, Nawsheen Hosenally has been frustrated to hear that agriculture is not ‘cool’. The 29-year-old graduate in agricultural extension and information systems knew she wanted to do something to redeem the image of agriculture among young people.

So the Mauritian and her Burkanibe, journalist husband decided to co-founded Agribusiness TV. Content for the channel is viewed through the website where short video stories about successful youth entrepreneurs who have careers in agriculture are uploaded.

“I had heard so much about how uncool agriculture was and realised no one changes this image but youth themselves,” Hosenally tells IPS.

“Our tagline at Agribusiness TV is ‘seeing is believing’. The visuals showing success stories in agriculture have greater impact than, for instance, reading a publication. Slowly, youth are seeing agriculture differently.”

With a little help from their mobile phones, apps, YouTube and Facebook, young entrepreneurs like Hosenally are changing the face of farming across Africa. Despite having 60 percent of the world’s arable and uncultivated land, the African continent is battling to eliminate hunger and poverty as the majority of its smallholder farmers are getting older, and realising lower crop yields than before.

The likelihood of the agriculture sector spurring Africa’s economic turnaround are huge, as are the challenges of attracting young farmers to an industry employing more than 60 percent of the continent’s population.

Population experts project that Africa’s population will double to 2.5 billion people in the next 40 years. This will place pressure on African governments to deliver more food, energy, jobs shelter, health and better standards of living for their citizens.

The digitalisation of agriculture offers young entrepreneurs the opportunity to create disruptive business models that accelerate modernisation of the sector, says Michael Hailu, Director of the Technical Centre for Agricultural and Rural Cooperation (CTA), based in The Netherlands.

“Young people can relate. When they see other young people doing something, they ask ‘why not me’?” said Hosenally. “By showing that farmers and entrepreneurs can be young and successful, they are changing the narrative about agriculture,” she adds. More young people are tuning into Agribusiness TV for inspiration and farming tips.

The TV channel, which also has a mobile application, attracted 500,000 views in the first year of its launch in 2012. Within six months, the videos had drawn 1 million views. Today, the viewership has increased to more than 8 million on the app, with over 180,000 followers on Facebook and almost 18,000 subscribers on YouTube.

“We conceived it for mobile phones because we were targeting youth,” Hosenally tells IPS. “The statistics are really great and show the audience is growing over time, but in terms of stories we see more impact in the feedback we get. The first impact is when someone is featured online. All of a sudden they are like a star as soon as their video is published. Some have 100,000 views in less than 24 hours. It is visibility that leads to networking and other opportunities.”

A pig farmer from Burkina Faso featured on Agribusiness TV mentioned that he was keen to expand his business into crop production, but did not have a tractor. A Burkinabe living in Spain saw the video and donated a tractor to the young farmer.

“This is the impact we want to see, and this will get more young people to see agriculture as a business,” says Hosenally. She has also created an Agribusiness Shop that sells natural value-added products from youth and women in Burkina Faso through a Facebook page.

More than 1.3 billion people are employed in agriculture across the world, making it one of the largest job providers and key source of income and livelihoods, according to figures from the Food and Agriculture Organisation of the United Nations (FAO).

Youth in Ghana look down on agriculture because they can only see elderly and poor farmers struggling to make ends meet, says Michael Ocansey, a computer science specialist and founder of Agrocenta, an online platform linking small-scale farmers and large farmer organisations in Ghana.

“Many young people move out of the farming communities to the cities to seek delusional greener pastures,” Ocansey tells IPS. “At AgroCenta, we are changing this by improving the financial livelihood of smallholder farmers, and also making agriculture sexier for the younger generation.”

Ocansey admits that examples of struggling farmers still exist, making it hard to undo the perception youth have about farmers and farming. More success stories may help to change the mind-set so that young people are persuaded to make a career in agriculture.

Lilian Mabonga, Head of Programmes at Ustadi foundation, a capacity development organisation based in Kenya, agrees.

“Many youth do not view agriculture favourably, and it is usually seen as something you do when you retire,” says Mabonga.

Youth entrepreneurs can face rough ground when it comes to planning a future in agriculture. Many lack access to land and infrastructure, and have inadequate skills and knowledge, as well as limited access to agricultural information, markets and finance.

The African Development Bank (AfDB) forecasts that Africa can increase its agricultural output to 880 billion dollars per year by 2030 if it removes barriers to development, which include, among other factors, low investment, poor credit access for farmers, limited market access, and limited use of modern agro inputs and mechanisation.

Already, Africa’s agribusiness market is projected to be valued at 1 trillion dollars by 2030, according to the AfDB.

The perception that you can make money on the farm needs to be supported with advise that hard work must be expected, cautions Lawrence Afere (35), founder of Springboard, an online network of producers and rural entrepreneurs in Ondo State of Nigeria.

“When we project farming as a viable economic opportunity for young people, we should tell them it is a process and you have to get your hands dirty,” says Afere whose programme is working with 3,000 members across six states in Nigeria, growing plantains, beans and rice. Springboard gives the farmers inputs and training, and buys back the produce for processing and value addition.

Access to finance tops the farming bucket list. Some initiatives are helping young entrepreneurs to go into agriculture without breaking the bank.

An FAO programme on Youth Employment is helping to beat poverty by developing the technical skills of young people in agriculture. In Guinea Bissau, FAO has promoted skills development for young farmers in aquaculture after realising that its target group of young entrepreneurs did not have the technical skill to run fish farming projects, even if they had all other resources.

Skills, effective policies and a conducive environment are key foundations on which to build successful agribusiness entrepreneurs, argues Tony Nsanganira, a youth employment specialist with FAO in Ghana.

Despite the many success stories of agripreneurs, one of the evidence-based studies from the Organisation for Economic Cooperation and Development (OECD) shows that youth entrepreneurship cannot be the solution for the massive youth employment challenge.

Over the next two decades, 440 million young people in sub-Saharan Africa will enter the labour market looking for work, according to the World Bank and the International Fund for Agriculture Development (IFAD).

Most youth in sub-Saharan Africa are poorly educated and have low skills, and the majority live in rural areas, says Ji-Yeun Rim, project manager at the OECD’s Development Centre, based in Paris.

“Yet rural youth have high job expectations, and they do not want to farm,” Rim told IPS.

A recent OECD study on rural youth aspirations in developing countries shows that 76 per cent aspire to work in high-skilled occupations, but in reality, only 13 per cent are actually in such jobs.

In the past four years, Rim has coordinated a youth inclusion project supporting governments in nine developing countries in Africa, Asia and Latin America to improve policies targeting youth.