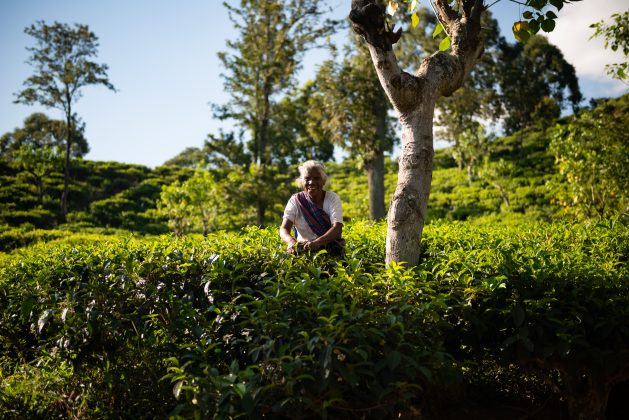 According to ‘The World State of Agriculture 2018’, India is the country with the highest number of organic producers (835'000). This is a woman cultivating her tea plantation in the southwestern Indian state of Kerala. Credit: Ilaria Cecilia/IPS

ROME, Oct 31 2018 (IPS) - Many countries and farmers around the world are not readily making the switch to organic farming. But the small Himalayan mountain state of Sikkim, which borders Tibet, Nepal and Bhutan, is the first 100 percent organic farming state in the world.

Earlier this month, Sikkim, won the Future Policy Award 2018 (FPA) for being the first state in the world to declare itself, in 2015, 100 percent organic.

Its path towards becoming completely organic started in 2003, when Chief Minister Pawan Chamling announced the political vision to make Sikkim “the first organic state of India”.

The FPA, also known as the ‘Oscar for Best Policies’ is organised every year by the World Future Council (WFC). The aim of the FPA is to investigate solutions to the challenges in today’s world. The WFC looks at which policies have a holistic and long-term outlook, and which protect the rights of future generations. And once a year the WFC awards showcases the very best of them.

This year, in cooperation with IFOAM-Organics International (IFOAM) and the Food and Agriculture Organization of the United Nations (FAO), the FPA decided to focus on the best policies to scale up agroecology.

In 2004, one year after the vision was announced, Sikkim adopted its Policy on Organic Farming and in 2010, the state launched the Organic Mission, an action plan to implement the policy. In 2015, thanks to strong political coherence and strategy planning, the goal was achieved.

Among the noteworthy measures adopted by Sikkim during that decade, the fact that 80 percent of the budget between 2010 and 2014 was intended to build the capacity of farmers, rural service providers and certification bodies. The budget also supported farmers in acquiring certifications, and had various measures to provide farmers with quality organic seeds.

The WFC has also rewarded other government policies with Silver Awards, Vision Awards and Honourable Mentions. Among the Silver awardees was Denmark’s Organic Action Plan, which has become a popular policy planning tool in European countries over the last decade.

Almost 80 percent of Danes purchase organic food and today the country has the highest organic market share in the world (13 percent).

“What has made Danish consumers among the most enthusiastic organic consumers [in the world], is that we have done a lot of consumer information and we have worked strategically with the supermarkets to place organics as part of their strategy to appeal to consumers on the value of food, putting more value into food through organics,” Paul Holmbeck, Political Director of ‘Organic Denmark’, told IPS.

The importance of being organic and agroecological

The policies of Sikkim and Denmark, as well as those of Ecuador and Brazil — countries that also received Silver Awards — are steps towards a world where agroecology becomes widespread and practiced globally. In fact, to conceive cultivated land as ecosystems themselves, in which every living and nonliving component affects every other component, is vital to obtain not only healthy and organic food, but also to preserve our environment.

Indeed, it would be a mistake to think that having organic products on our tables necessarily means having solved all problems related to intensive agriculture and to the damages on the environment.

“Agroecology is one approach that applies ecological concepts and principles to food and farm systems, focusing on the interaction between micro-organisms, plants, animals, humans and the environment, to foster sustainable agriculture development, in order to ensure food security and nutrition for all, now and in the future,” Maria Helena Semedo, FAO Deputy Director General, told IPS. “It is based on co-creation of knowledge, sharing and innovation, combining local, traditional, indigenous practices with multi-disciplinary science.”

According to the report, The World of Organic Agriculture 2018 – Statistics and Emerging Trends, released earlier this year and authored by the Research Institute of Organic Agriculture (FiBL) and IFOAM, 57.8 million hectares (ha) worldwide were farmed organically in 2016. This is an increase of 7.5 million ha (or 13 percent) compared to the previous year.

According to the report, the total area devoted in Asia to organic agriculture was almost 4.9 million ha in 2016 and there were 1.1 million organic producers in the region, with India being the country with the highest number of organic producers (835,000).

So the success of Sikkim is not surprising considering that the Asian continent can be considered among the regions at the forefront of organic production.

However, favouring the scale up of agroecology, which includes producing organic products, is unfortunately not that simple.

“To harness the multiple sustainability benefits that arise from agroecological approaches, as enabling environment is required, including adapted policies, public investments, institutions and research priorities,” said Semedo.  “However, this is not yet a reality in the majority of countries.”

Indeed, poverty, malnutrition, unfair distribution of wealth, decreasing of biodiversity, deterioration of natural resources like soil and water, and climate change are significant challenges in most countries.

Agriculture will become one of the greatest challenges, if not addressed properly. Therefore, moving towards more sustainable agriculture and food systems is certainly a potential part of the solution, not only for our health and wellness but for the planet itself.

“It’s vital for everyone to be organic [and] for every person to eat organic because otherwise people would eat poison and basically writing a recipe for chronic diseases. It could be cancer [as well as] neurological problems,” warned Vandana Shiva, a food and agriculture expert and member of the WFC, told IPS during the ceremony of the Future Policy Award 2018 at FAO headquarters in Rome this October.

“Organic is the only living solution to climate change. Chemical farming is a very big contributor to greenhouse gas emissions but organic farming takes the excess carbon out of the atmosphere and puts it in the soil,” she added.

However, there seems to be a large consensus with the fact that the planet needs to move towards a more sustainable way of living and this is a reason for optimism.

“I’m very optimistic about organics [because] we are creating new solutions for climate and animal welfare, sustainability and good soil every single day,” said Holmbeck. “Governments are starting to see that organic food policy works: it is good for farmers, for consumers and for the planet.”