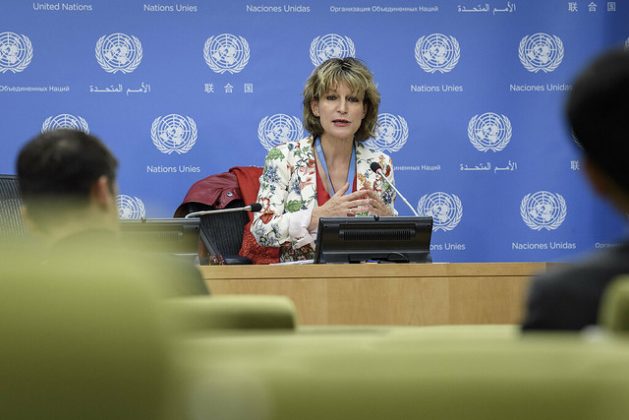 UNITED NATIONS, Jun 27 2019 (IPS) - Saudi journalist Jamal Khashoggi was deliberately killed at the hands of state actors and journalists around the world are increasingly seeing the same fate, said a United Nations expert.

After a six-month investigation, U.N. Special Rapporteur on extrajudicial, summary or arbitrary executions Agnes Callamard determined that Saudi Arabia is “responsible” for the “extrajudicial” murder of Washington Post writer Khashoggi.

“This killing was a result of an elaborate mission involving extensive coordination and significant human and financial resources. It was overseen, planned, and endorsed by high level officials and it was premeditated,” she said to the Human Rights Council.

Since it occurred at a consulate in Turkey, the killing cannot be considered a “domestic matter” and violates the Vienna Convention on Consular Relations as well as the prohibition against extraterritorial use of force in times of peace, making it an international crime.

Callamard pointed to the need to establish a U.N. criminal investigation to ensure the delivery of justice, noting that the inquiry undertaken by the Saudi authorities was woefully inadequate.

“The investigation carried out by the Saudi authorities has failed to address the chain of command. It is not only a question of who ordered the killing—criminal responsibility can be derived from direct or indirect incitement or from the failure to prevent and protect,” she said.

The government of Saudi Arabia continues to deny its involvement and rejected the new report, stating that it is based on “prejudice and pre-fabricated ideas.”

While the killing of Khashoggi was brutal, his story is just one of many cases of targeting journalists around the world.

“This execution is emblematic of a global pattern of targeted killings of journalists, human rights defenders, and political activists,” Callamard said.

According to Reporters Without Borders (RSF), 80 journalists were killed, 348 imprisoned, and 60 held hostage in 2018, reflecting an unprecedented level of violence against journalists.

Javier Valdez Cárdenas, a Mexican journalist who investigated cartels, was killed in May 2017.

Just days after, Valdez’s colleagues and widow began receiving messages infected with a spyware known as Pegasus, which was bought by the Mexican government from Israeli cyber warfare company NSO Group.

According to the NSO Group, Pegasus is only sold to governments for the purposes of fighting terror and investigating crime. However, digital watchdog Citizen Lab found 24 questionable targets, including some of Mexico’s most prominent journalists.

The programme has also been used elsewhere by repressive governments such as the United Arab Emirates which targeted and imprisoned human rights defender Ahmed Manor for his social media posts. In Canada, critic of the Saudi regime and friend of Khashoggi, Omar Abdulaziz, was also infected with the spyware by a Saudi Arabia-linked operator.

While a suspect was arrested in 2018 for the murder of Valdez, it is unclear if they are the main culprit.

“The arrest of a suspect in the murder of Javier Valdez Cárdenas is a welcome step, but we urge the Mexican authorities to identify all those responsible for the killing, including the mastermind,” said Committee to Protect Journalists’ (CPJ) Mexico Representative Jan-Albert Hootsen.

“Too often, investigations into the murders of Mexican journalists stall after low-level suspects have been arrested, which allows impunity to thrive,” he added.

The Mexican government also launched an investigation into the misuse of such surveillance technology, but as yet no one has been punished.

Callamard urged Saudi Arabia to release those imprisoned for their opinion or belief and to undertake an in-depth assessment of the institutions “that made the crime against Mr. Khashoggi possible.”

She also stressed the need to strengthen laws to protect individuals against targeted killings, including the sharing of information if an individual is at risk.

“There are clear signs of increasingly aggressive tactics by States and non-State actors to permanently silence those who criticise them. The international community must take stock of these hostile environments, it must take stock of the findings of my investigation into the killing of Mr. Khashoggi,” Callamard told the Human Rights Council.

“Denunciations are important, but they are no longer sufficient. The international community must demand accountability and non repetition. It must strengthen protections and prevention urgently. Silence and inaction will only cause further injustice and global instability,” she added.