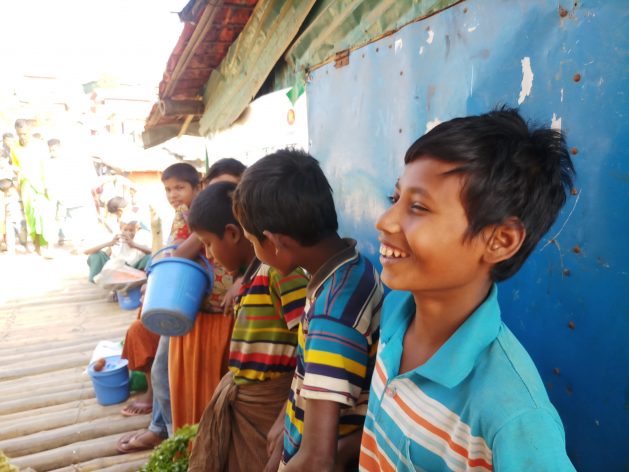 Mohammad Rafique (right) and other refugee children gathered at the Rohingya market in Kutupalong camp to sell vegetables he brought earlier from a local market in this photo dated Mar. 11, 2020. This was two weeks before Bangladesh went into a nationwide lockdown in an attempt to contain the spread of the coronavirus. Credit: Rafiqul Islam/IPS

But nowadays he has to stay home with his parents inside their makeshift home built on the slopes of a hill in the sprawling refugee settlement because of the coronavirus or COVID-19 pandemic.

On Mar. 26 Bangladesh went into a nationwide lockdown in an attempt to contain the spread of the coronavirus. Latest figures show that the country has just over 1,200 reported cases of the coronavirus and 50 deaths.

The Bangladesh government later followed with a lockdown of the 34 refugee camps in Cox’s Bazar district on Apr. 8 and, aside from essential food and medical aid, people are not allowed to leave or enter the district.

Cox’s Bazar is the world’s largest refugee camp. Fleeing persecution in the predominantly Buddhist Myanmar, over one million Rohingyas have been living in the overcrowded camps in the southeastern Bangladeshi district.

“My parents have strongly asked me to stay at home after they are informed that people are getting infected with a lethal virus around the world and it started infecting people nearby the camps too,” Rafique told IPS.

“Not only me and my parents, the Rohingya population living in the camp are very concern about the infectious virus as they have heard that many people are dying around the world after getting infected with the virus,” he said.

Although no coronavirus case have been recorded in the Rohingya camps as yet, one person in an area nearby has tested positive for COVID-19. And this created a wave of panic among the refugees.

“It is true that panic grips Rohingyas in the camps. But, along with the local administration, we are conducting awareness campaign among the refugees so that they can be aware of the infectious coronavirus,” Rohingya community leader Hafez Jalal told IPS over phone.

He said the refugees have been advised to stay in their homes and follow health guidelines to keep safe from infection.

Social distancing is the main way to prevent coronavirus but this is very hard to maintain in the overcrowded camps where makeshift homes are built alongside each other, with only narrow lanes and paths bisecting areas. There are few water points in the camp, and while it is not known exactly how many there are, one water point is believed to serve the needs several thousand people.

Experts are concerned that if the coronavirus emerges in the camp, it could spread rapidly in the crowded conditions.

United Nations High Commissioner for Refugees spokesperson Louise Donovan said the overcrowded conditions in the camps pose a greater risk for the virus spreading rapidly in the event of an outbreak as currently around 40,000 people are living in one square kilometre.

Social distancing is particularly challenging in such an environment, despite measures which have been put in place at distribution points throughout the camps to maintain this.

“At the moment, it is a race against time to establish isolation and treatment facilities in order to cater for patients if there is any outbreak in the camps,” Donovan told IPS.

She said all humanitarian partners, in support of the Bangladesh government, were working round-the-clock to ensure a minimum response capacity in the case of an outbreak since the situation was very concerning. 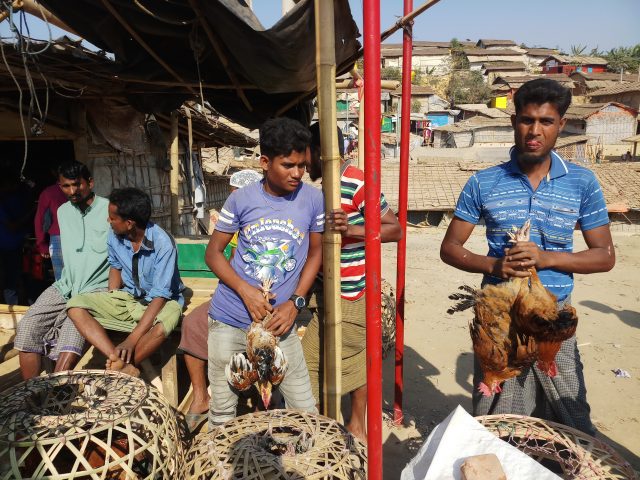 Rohingya refugee traders selling chickens at market inside the Kutupalong refugee camp in Cox’s Bazar in this photo dated Mar. 11, 2020. This was two weeks before Bangladesh went into a nationwide lockdown in an attempt to contain the spread of the coronavirus. Credit: Rafiqul Islam/IPS

Sharing information about the coronavirus has also been key.

According to one aid worker, communication about COVID-19 is ongoing in the refugee camps through radio spots, videos, posters, and messages, in Rohingya, Burmese and Bengali languages. The messages are also passed on by Imams and other community leaders and volunteers, who explain how the coronavirus spreads, how people can protect themselves and their families, what the symptoms are and how they can seek care.

The government is also disseminating awareness messages through multiple channels, including mobile phone networks and over loudspeakers.

Locals have told IPS that law enforcement agencies and army personnel have installed roadblocks on the main roads of the district and are carrying out patrols inside and around the refugee camps to prevent people moving about.

“Refugees of one camp would not be to go to another camp and they are not allowed to set up markets haphazardly inside the camps. But, steps have been taken to keep the refugees at homes and ensure supply of essential commodities for them. The law enforcing agencies have intensified their surveillance there,” he said.

Hossain warned that legal actions would be taken against those who violate the order.

Yet despite knowing the risks, many have had no choice but to leave their homes for food and water.

“Many refugees are going out of their homes for daily needs, ignoring the directives of the authorities concerned, which is a matter of concern,” Jalal added.

The Bangladesh government has extended the nationwide shutdown till Apr. 25.