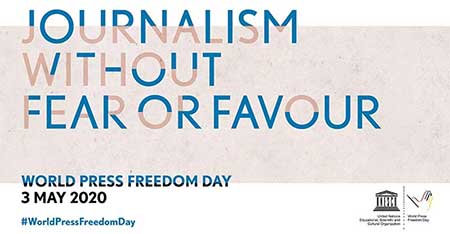 JOHANNESBURG, South Africa, Apr 27 2020 (IPS) - Censorship, smear campaigns and harassment. These are just some of the daily struggles that media professionals are facing in Hungary. And now the threat of jail time may be looming. In the context of World Press Freedom Day, there is little to celebrate in the Eastern Bloc region.

The government, under the leadership of Prime Minister Victor Orban and his Fidesz Party, has ramped up its efforts to destroy any remaining media independence with its ‘Bill on the Protection against the Coronavirus’. The new legislation gives government the power to rule by decree, allowing it to prolong emergency measures and evade parliamentary scrutiny. In addition, independent journalists in Hungary covering the pandemic may face prison time of up to five years for publishing any content about the virus which is considered ‘fake news’ by the government.

Arguably, what is considered ‘conveying false information’ is open to the government’s interpretation and may be anything that paints a negative picture of its response to the pandemic. A case in point – the week before the bill was submitted, Orban’s party and pro-government media accused the independent press of spreading ‘fake news’ for reporting that Hungarian doctors and nurses lack proper protective gear.

Ironically, criticism of the new coronavirus bill has been labelled ‘fake’ by Orban’s political allies, who deny that it gives the government unlimited power.

Hungary’s response to COVID-19 has been flagged as a cause for concern by the CIVICUS Monitor, an online platform that records violations to civic freedoms, such as freedom of expression. In a recently published report documenting civic space restrictions during the pandemic, the Monitor cites “overly broad emergency laws and new restrictive legislation” implemented in Hungary.

However, this latest move by Orban’s government, which will negatively impact the working life of journalists, shouldn’t come as a surprise. Censorship is the number one violation documented in Europe and Central Asia by the CIVICUS Monitor, and the most common violation globally, occurring across 178 countries.

Freedom of expression has been in decline for several years in Hungary. In 2013 Hungary was ranked 56 out of 180 countries in the World Press Freedom Index but it slid down to 89th place this year.

While in February, an investigation by Politico reported that, according to internal emails obtained, Hungarian public media (MTVA) employees require special approval from their editors to cover some topics, such as climate activist Greta Thunberg and migration. Coverage of reports from leading human rights organisations, like Amnesty International and Human Rights Watch (HRW), is prohibited.

In addition, journalists face continuous attacks and intimidation, such as smear campaigns which brand them ‘Hungary-haters’ or ‘foreign agents’, and female journalists are also under attack.

Examples of harassment faced by female journalists are documented in a recent report by the International Press Institute (IPI). It describes the case of Rebeka Kulcsár, a journalist with 444.hu, who was subjected to bullying (“you stupid b***h”), sexual violence (“I’m going to rape you”) and public shaming when her picture was posted online.

Index.hu’s photo editor, Tímea Karip, explains that some female journalists choose to leave their bylines off their stories because of harassment. “Politics and being a woman are both risk factors for harassment,” she says. Acts such as these, which aim to suppress freedom of expression, have had a chilling effect on journalists.

The recent developments in Hungary are a huge concern for democracy, freedom of expression and the rule of law. Despite this, the European Union has failed to take any concrete action against its member state.

The EU has shied away from directly criticising Hungary. In March, EU Commission President Ursula von der Leyen said, “Democracy cannot work without free and independent media. Respect for freedom of expression and legal certainty are essential in these uncertain times.” Although she was referring directly to Hungary, she failed to mention the EU state by name. Von der Leyen finally broke her silence in April by openly condemning Hungary’s new coronavirus bill. However, the EU’s response can barely be considered a slap on the wrist – Hungary is yet to feel any real pressure from its big brother supervisor.

The EU needs to act more decisively: silence and prevarication may have a ripple effect on media freedom for other countries in the Eastern bloc.

Media freedom is already under threat in neighboring states, such as Poland. According to the International Press Institute (IPI), around 50 criminal and civil cases have been brought against the Polish newspaper, Gazeta Wyborcza, by various state or state-controlled institutions. Also, the ruling Law and Justice party (PiS) has used several successful methods to stifle critical reporting, and PiS politicians repeatedly invoke criminal libel laws against journalists.

If Hungary is to be held accountable for its recent actions, then a more direct approach is needed from the EU in order to prevent freedom of expression from deteriorating any further.

In the meantime, another way to protect media freedom in Hungary is through the judicial system. This was recently demonstrated when the Budapest-Capital Regional Court ruled that the decision of the Hungarian Competition Authority to allow for the creation of a pro-government media empire (KESMA) was unlawful. In late 2018, 476 pro-government media outlets were swept into KESMA, with many affiliated to allies of Prime Minister Viktor Orban.

Although there are no reported cases of journalists being arrested under the new coronavirus law, the bill has created a hostile environment for media professionals, and many Hungarian journalists are now facing threats and demands to censor their work.

The EU should take note: while we wait for it to act decisively, on World Press Freedom Day journalists continue to remain under threat, as the little media freedom that does remain in Hungary is slowly eroded.

Hungary is rated ‘obstructed’ by the CIVICUS Monitor.