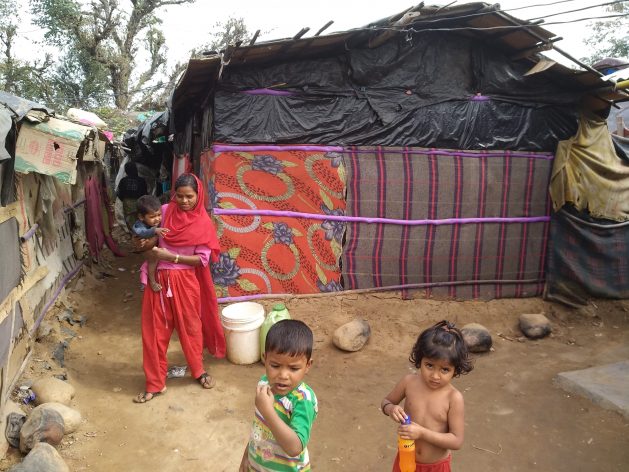 Refugee Rohingya children in Coz's Bazar aren't allowed to attend local school. For many, continuing their education was unattainable until Bangladesh announced in January that refugee children could also receive a formal education, and would be educated on the school curriculums used in both Bangladesh and Myanmar in preparation for their repatriation. Credit Stella Paul/IPS

HYDERABAD, India , Aug 14 2020 (IPS) - 15-year-old Humaira* sits on the mud floor of her hut in Ukhiya camp, Cox’s Bazar, listening as the rain beats down on the tarpaulin roof.

Three years ago, Humaira arrived in Bangladesh at the refugee camp in Cox Bazar, which is now the largest such camp in the world, housing nearly a million Rohingyas. Her family had fled their home in Rakhine state, Myanmar, after her father had been killed by the army.

As a refugee child, Humaira wasn’t allowed to enrol in a local school. Confined to home, Humaira, who dreams of becoming a school teacher someday, suffered silently.

But things changed in January when the government of Bangladesh announced that refugee children could also receive a formal education, and would be educated on the school curriculums used in both Bangladesh and Myanmar. In addition, they could also learn professional skills that could help them find jobs in the future.

The news excited Humaira, who had been depressed, says her mother Samuda Khatun. “For the first time since the death of her father, my daughter was smiling again,” Khatun tells IPS.

Returning to Rakhine state, which is still in the middle of an armed conflict, is upsetting most Rohingyas. But Humaira doesn’t seem to care. “All I want is to study,” she says.

The schooling year was meant to start in April, but by then the COVID-19 pandemic resulted in a national lockdown across Bangladesh. And Humaira’s dreams of schooling were postponed.

Humaira is one of 75 million children and youth across the world living in crisis today.

Many of them have never been to school or have lost two to three years of education due to war and  displacement. Education Cannot Wait (ECW), a multilateral global fund, is now addressing the funding gap for education in crisis. In fact, ECW figures show that in 2015 some 39 million girls alone were out of school because of war and disasters.

Since 2016, ECW has reached nearly 3.5 million children and youth in 29 humanitarian crisis-hit countries, including Bangladesh. Of them, 48 percent are girls.

Working with 75 partner organisations, ECW has so far provided $662.3 million for supporting education in emergencies.

On Aug. 11 ECW launched its 2019 Annual Results Report tiled Stronger Together in Crisis.

According to the report, ECW has committed $12 million to support Rohingya refugee children’s education in Bangladesh, of which $6 million has already been provided. The funding has so far helped 63,000 students enrol at various learning centres run by ECW partners and local communities. The goal is to reach 88,500 children, 51 percent of whom are girls.

The challenges surrounding Rohingya children are many. About 65 percent of them can only read letters, not words or a sentence.  Only seven percent of Rohingya refugee children can read a paragraph of text or do basic maths. To address this, ECW has taken a holistic approach to education, which includes adopting a series of ‘out of the box’ techniques.

In the Rohingya refugee camps, teachers in the learning centres are trained in inclusive education, child protection, emergency preparedness and giving  psychosocial support to children dealing with trauma.

A special focus has been on non-formal learning opportunities like solar installation and maintenance, hand sewing, embroidery and tailoring. Alongside, separate toilets for boys and girls have been built to help the girls feel secure and at ease.

Henritetta Fore, executive director of the United Nations Children’s Fund, which hosts the ECW secretariat, described the holistic approach the fund has been taking to support education in crisis.

“We have created a focus on five areas. One, affordability: we need to make sure a girl can afford to go to school. Second is distance learning. We have got to  try to get every girl reached by distance learning. Third, we have to mobilise communities, so there is lots of help out there. Fourth, protection. There is so much difficulty if you are an IDP or a refugee, so we need to help. And lastly, we really want young people to participate.  So, education is a ladder out of poverty. Its the greatest asset we can give to young people,” Fore said. She was speaking at a high-level virtual seminar host by ECW on Aug. 12.

Deborah Kalumbi, a 3rd-year student at Cavendish University, Lusaka, and the recipient of a U.N.High Commissioner for Refugees scholarship, was another attendee.

Kalumbi’s family fled to Zambia from their home in the conflict-torn Democratic Republic of Congo when she was just seven. Unlike many other fellow refugee children, Kalumbi was able to enrol in school, which she describes as challenging as well as enriching.

“It was difficult as everything was new and different. We were also treated as different. However, education made me understand the diversity that exists and value its importance,”  said Kalumbi, who is now a vocal advocate for the rights and education of refugee youths.

From the beginning, ECW has focused on building strong partnerships at global and local level, to deliver inclusive, equitable, quality education for children and youth caught in crisis. According to the new report, this approach has been successful as there is a distinct growth in political commitment for the emergency education sector. Similarly, education in humanitarian crisis is also becoming a priority.

For example, globally, the share of education in all humanitarian funding increased from 4.3 per cent in 2018 to 5.1 percent in 2019, representing a record amount of over $700 million.

At the webinar, ECW director Yasmin Sherif credited the progress to the partnership model the fund had adopted. “It’s all about being together. We were able to move fast because we acted together,”  Sherif said, pointing to the fund’s continued investment during the COVID-19 crisis.

In the first four months of 2020, ECW has provided $60 million to 33 countries to educate refugee and displaced children and youths aged three to 18 who were hard-hit by COVID-19 .

However, despite the significant progress of the past tree years, ECW is still underfunded. So it is now  calling upon other donors and partners to step up and provide further financing to fill the gap.

“ECW and its partners are working to urgently mobilise an additional $310 million to support the emergency education response to the COVID-19 pandemic and other ongoing crises. Together with in-country resource mobilisation, this will allow us to reach close to nine million children annually,” Sherif said.

Khera, Canada’s parliamentary secretary who also spoke at the webinar, said that when a crisis breaks out, the list of priorities usually excluded education. She said it was now time to change this in order to avoid the risk of a generation getting lost without education.“We must combine measures to ensure continuity of education during the COVID crisis,” Khera said.

One of the most notable speakers on the webinar was Brown – former United Kingdom prime minister and chair of the ECW high-level steering group. Delivering a strong message to the global community, Brown said that there was an urgent need to support education of children and youths in a global crisis like the pandemic.

Half a world away, in Cox’s Bazar, Humaira also waits in hope of the day when she can start her schooling.

Since September, mobile internet services have been banned in her camp, so children here live on the other side of the digital divide, unable to attend any possible online classes that were set up during the lockdown. So Humaira just has to wait for the pandemic to be over.

“Once this disease is over, I can go to school. Once I become a teacher, my mother will get some relief. Our lives will change,” she says, hope flickering in her eyes.