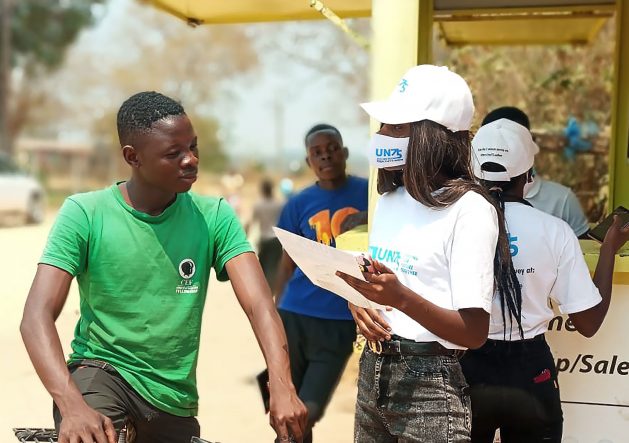 Respondents being questioned for the United Nations global conversation on the world they want. Many called for universal healthcare in the wake of the COVID-19 pandemic. Courtesy: United Nations

BONN, Germany, Jan 11 2021 (IPS) - The peoples of the world are unanimous – access to basic services such as universal healthcare must become a priority going forward. So too should global solidarity, helping those hardest hit by the COVID-19 pandemic and addressing the climate change emergency.

The collective thoughts of the world’s future by some 1.5 million people, including those from various organisations and networks, from all countries across the globe has been highlighted in a global initiative by the United Nations, which it called the world’s largest conversation on the future people want.

Last year, to mark the 75th anniversary of the UN, it conducted various townhall discussions, dialogues and an online survey from January until November.

The resultant report, Shaping Our Future Together, showed that people across the world were unified in their concerns, with the current coronavirus pandemic being the foremost in their minds.

“When you ask people about their fears and hopes for the future, when you ask people about their expectations of international cooperation about their priorities in the immediate, post-COVID, there is remarkable unity across generations, regions, income groups, education groups, and from people from different political direction,” Fabrizio Hochschild, Special Adviser to the Secretary-General on the commemoration of UN’s 75th anniversary, said during a virtual press conference on the findings on Friday, Jan. 8.

Indeed respondents of the UN conversation from all but two regions – sub-Saharan Africa and Eastern and South-eastern Asia – had listed access to universal healthcare as an immediate short-term priority, according to the report.

In the regions of sub-Saharan Africa and Eastern and South-eastern Asia the call for increased support to places hardest hit by the pandemic and greater global solidarity ranked top. Next was the need for universal healthcare.

“This reflects the grim reality reported by UNDP – that daily COVID-19 related deaths have exceeded other common causes of death throughout much of 2020. Emergency services, health systems and health workers are under enormous strain around the world, with indirect health impacts also expected to rise,” the report noted.

Yesterday, Jan. 10, UN Secretary-General, António Guterres marked the 75th anniversary of the first UN General Assembly held in London by giving a keynote address. He noted that the COVID-19 pandemic “has had a disproportionate and terrible impact on the poor and dispossessed, older people and children, those with disabilities and minorities of all kinds”.

“It has pushed an estimated 88 million people into poverty and put more than 270 million at risk at acute food insecurity,” Guterres said.

The second short-term priority was a call for greater global solidarity and increased support to places hardest hit by the pandemic.

Indeed, Guterres said in his speech that the COVID-19 pandemic had highlighted serious gaps in global cooperation and solidarity.

“We have seen this most recently in vaccine nationalism, some rich countries compete to buy vaccines for their own people, with no consideration for the world’s poor,” he said.

But he went on to thank the government and people of the UK for supporting the COVAX facility, established by the World Health Organisation (WHO).

COVAX is the global initiative to ensure rapid and equitable access to COVID-19 vaccines for all countries, regardless of income level. In December, COVAX announced that it had arrangements in place to access two billion doses of COVID-19 vaccine candidates on behalf of 190 participating nations. At the time, WHO said in a statement that this would ensure deliveries of the vaccine in the first quarter of 2021 to participating countries.

Guterres said the pandemic has highlighted the “deep fragilities in our world” and in order to tackle them we need to reduce inequality and injustice and to strengthen the bonds of mutual support and trust.

He also said that the world needed “a networked multilateralism, so that global and regional organisations communicate and work together towards common goals”.

“And we need an inclusive multilateralism, based on the equal representation of women, and taking in young people, civil society, business and technology, cities and regions, science and academia,” he said.

People around the world also called for safe water and sanitation, and education.

Rethinking the global economy and making it more inclusive to tackle inequalities was another concern.

“Respondents in all regions identified climate change and environmental issues as the number one long-term global challenge,” the report noted.

Guterres was pragmatic, admitting that while the UN was proud of its achievements over the last 75 years, including helping to boost global health, literacy, living standards and promoting human rights and gender equality, it was also aware of its failures. The biggest one being the inability to adequately address climate change.

“The climate emergency is already upon us and the global response has been utterly inadequate,” he stated.

“The past decade was the hottest in human history, carbon dioxide levels are at record highs, apocalyptic fires and floods, cyclones and hurricanes are becoming the new normal,” he stated.

“If we don’t change course,” Guterres warned, “we might be headed for a catastrophic temperature rise or more than 3 degrees this century.”

“Biodiversity is collapsing, one million species are at risk of extinction, and whole ecosystems are disappearing before our eyes.

“This is a war on nature and a war with no winners,” Guterres said.

He said that while the pandemic was a human tragedy – it can also be an opportunity.

“The past months have shown the huge transformations that are possible, when there is political will and consensus on the way forward,” Guterres said.

He said the Paris Agreement and the 2030 Agenda for Sustainable Development already provide the blueprint for this.

“We now need increased ambition and action to deliver – beginning with the climate emergency. The central objective of the UN this year is to build a global coalition for carbon neutrality by the middle of the century,” he said, adding that meaningful cuts — reduction in global emissions by 45 percent by 2030 compared to 2010 levels – were needed.

Akosua Agyepong, a youth activist from Ghana, asked Guterres after his speech how the lessons learned from the current pandemic could be used in addressing climate change “so that we can achieve the [goals of the] Paris Agreement and the SDGs”.

Guterres replied saying that currently trillions of dollars were spent on supporting economics facing the impacts of COVID-19. “When spending those trillions, we are borrowing in relation to the future. We need to make sure those trillions are spent to address the recovery from COVID but also the challenge of climate change.”

“There are many ways in which we can organise our recovery to make it sustainable and inclusive, reducing at the same time inequalities and making peace with nature and our planet in order to make sure we are able to tame climate change, and in order to make sure we do not allow temperatures to rise by more than 1.5 degrees C at the end of the century and that we can get a net zero coalition in the middle of the century to make sure that we rescue our planet,” he said.

In his speech Guterres also highlighted the role of gender equality in development, saying that justice and equality, including gender equality, were prerequisites to transforming the challenges ahead.

“Women’s leadership and equal participation are key ways to address the global challenges we face.

Guterres was also optimistic, in turn praising the youth of the world.

“Today, it is often young people who are showing courage, and demanding courage from the rest of us. Let me be clear: I stand with you. You give me hope. Young people can and do change the world,” he said.

He said he was confident that working together the world can emerge from the pandemic “and lay the foundations for a cleaner, safer, fairer world for all, and for generations to come”.