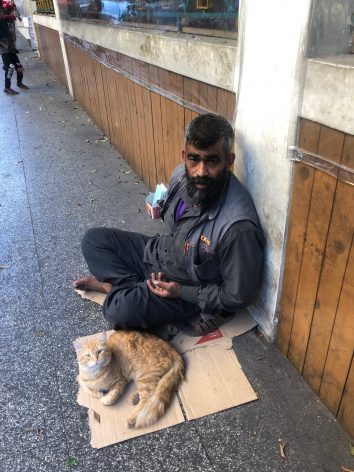 Poverty and hunger are on the rise in Lebanon. The World Food Programme estimates food prices have increased by 628 percent in two years. Credit: Mona Alami /IPS

Beirut, Nov 18 2021 (IPS) - On the streets of Beirut, Hadi Hassoun begs for a few pounds to feed his five children. He has little hope of a job, especially now that the economic crisis in Lebanon has destroyed wealth.

The country already significantly lagged with UN Sustainable Development Goals of poverty and inequality, but the situation has gone from bad to worse.

In the past year, poverty has tripled, and one in every four children in the country are skipping meals. The Lebanese pound (LP) has witnessed a devaluation exceeding 90%, dropping from 1,500 LP to the dollar to over 22,000 LP to the US dollar. At least half of the population is suffering in extreme ways because of this situation, experts say.

The streets of Beirut are an illustration of Lebanon’s dire situation. Hassoun sits begging on the streets of Hamra. “I have five kids, and my youngest daughter has a congenital heart problem,” he explains. “So, I do my best to raise some money every day to try catering to their basic needs.”

In Beirut, the UNICEF office reported that three out of 10 children go to bed hungry or skip meals.

A few meters away, Khalid, using a pseudonym, is a garbage collector for one of Beirut’s main waste management companies. The man, in his sixties, hails from Wadi Khaled, a border town over 150 km away from Beirut.

“I do not have the means to visit them anymore because of rising fuel prices, so I send them money every two weeks, which allows them to eat basic staples such as rice and lentils,” he says. Khalid makes 60,000 LP per day, which amounts to less than $2.5 a day.

The World Food Programme (WFP) estimated that food prices have gone up by 628 percent in just two years.

According to Nassib Ghobril, chief economist for Lebanese Byblos Bank, the CPI rose by 144% in September 2021 compared with the same month in 2020, while it registered its 15th consecutive triple-digit increase since July 2020.

“The cumulative surge in inflation is due, in part, to the inability of authorities to monitor and contain retail prices, as well as to the deterioration of the Lebanese pound’s exchange rate on the parallel market, which has encouraged opportunistic wholesalers and retailers to raise the prices of consumer goods disproportionately,” Ghobril says.

He adds that the smuggling of subsidised imported goods has resulted in shortages of these products locally, which also contributed to price increases.

“Further, the emergence of an active black market for gasoline during the summer has put upward pressure on prices and inflation.”

The prices of fresh or frozen cattle meat in Lebanon jumped by 118.6% in the period, constituting the highest increase in the price of this item in the region, reported Ghobril.

In parallel, the price of bread and other manufactured articles sold went up by 32.8%, representing the third-highest increase in bread prices among MENA countries.

The impact is devastating.

Lebanon falls short on the UN SDGs at every level, particularly when it comes to poverty and inequality.

Economist Kamal Hamal Hamdan explains that while there are no credible governmental statistics, at least 55% of the Lebanese population live under the poverty line.

“However, estimates actually point to 75% of the Lebanese population falling under the poverty line. This number goes up to 85% in extremely poor areas such as North Lebanon or the Baalback Hermel area,” points out Adib Nehme, a Lebanese development and poverty consultant.

However, both Ghobril and Hamadan believe these statistics may not consider the various sources of income of Lebanese in the form of aid and remittances. Lebanon received last year $ 6.5 billion in remittances from Lebanese expatriates.

“If these people managed to keep their jobs despite Lebanon’s meltdown, this means that around three-quarters of the population earns around $120,” says Nehme.

Additionally, Hamdan underlines that around 60% of wage earners in the pre-crisis era contributed to 25% of the Lebanese GDP, which has worsened.

The financial crisis plaguing Lebanon has created further inequality. The poor and the middle class have been the hit hardest. When they have the luxury have bank accounts, their funds are frozen, and when withdrawn, the funds earn a lower than the black-market rate.

The richest and politically connected have been able to transfer their funds despite the unofficial capital control imposed by Lebanese banks.

“One has to keep in mind that around 963 depositors own $23billion, that is not considering these people’s wealth in land and investments. There is growing polarisation because of concentration of wealth, with Lebanon’s economic collapse,” says Nehme.

Hamdan and Nehme believe this is leading to the disintegration of the country’s social and economic fabric.

“This could lead to growing social pressure and transient violence across the country,” says Hamdan.