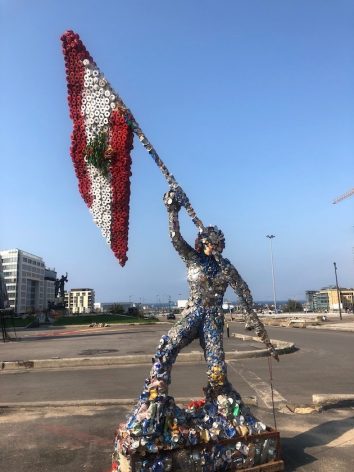 Women have taken the helm in Lebanon’s protests, but not in the realm of formal politics. This role is symbolized in this statue of a protesting woman in Martyrs' Square, Beirut. Credit: Mona Alami

According to the Gender Gap index, Lebanon ranks third last in the Middle East and North Africa (MENA) region, with only Syria and Yemen, both plagued by war, scoring lower.

According to Reliefweb, since 2010, Lebanon has witnessed a consistent decline in its relative gender gap score – reaching close to zero in terms of political empowerment.

In November, incumbent Prime Minister Najib Mikati was criticized for saying that Lebanon’s Independence Day celebrations were similar to a “divorced woman celebrating her wedding anniversary … but let’s not forget that if she had remained understanding until her last day in the marriage, she wouldn’t be divorced…”

Rima Husseini, professor at the Lebanese American University (LAU), says empowerment in the country is superficial.

“On the surface, we are seen as an example because Lebanon has a high number of educated women, with many female entrepreneurs. In appearance, we seem more liberated, but that does not translate into political empowerment at a practical level,” she says in an exclusive interview with IPS.

There is only one woman in the current government.

In the previous election in 2018, only six of 86 women who registered to run for the 128-seat Parliament won their seats. Five of them were members of political parties, which helped facilitate their victory. 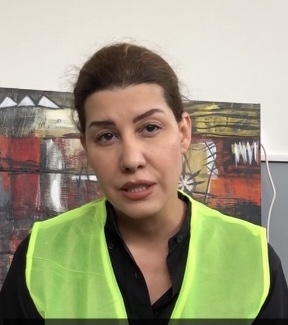 Paula Yaacoubian, ventured into politics without the usual patronage – a family name, wealth, or the support of a male political leader.

Only one, former television news presenter Paula Yacoubian ran as an independent, won a seat. Unlike other female candidates, she did not come from a political family nor backed by a local male political leader.

“Inequality stems from the patriarchal framework of households, where family codes and communal laws see women as objects owned by their family. This reality affects women’s political participation in Lebanon,” explains Husseini.

The patriarchal system, where women educate their sons differently from their daughters, is one of the biggest challenges faced by Lebanese women. Another stems from the sectarian system, one of the most detrimental factors hindering women’s political representation, explains Yaacoubian.

More than two decades have passed since Lebanon adopted the Convention on the Elimination of All Forms of Discrimination Against Women (CEDAW). Yet, it has failed so far to comply with the treaty, more specifically when it comes to the gender quota system allowing women’s integration into political life.

“Lebanon’s patriarchal system, which is built on laws that aim to control women and youth, does not allow for real citizenship, with factors of separation such as class and religion prevailing,” says Husseini. “When you think of it, there is no real Lebanese citizenship, no social contract that binds us together. Women have a great role to play but cannot because of the legal system that differentiates between men and women.”

This translates to Lebanon falling behind regarding women’s representation, with no quotas to act as a safeguard, unlike other regional countries.

In nearby Jordan, in appearance, a more conservative country than Lebanon, nine percent of women hold ministerial positions. Another 12 percent participate in Parliament, with an additional 32 percent participating in the local legislatures. 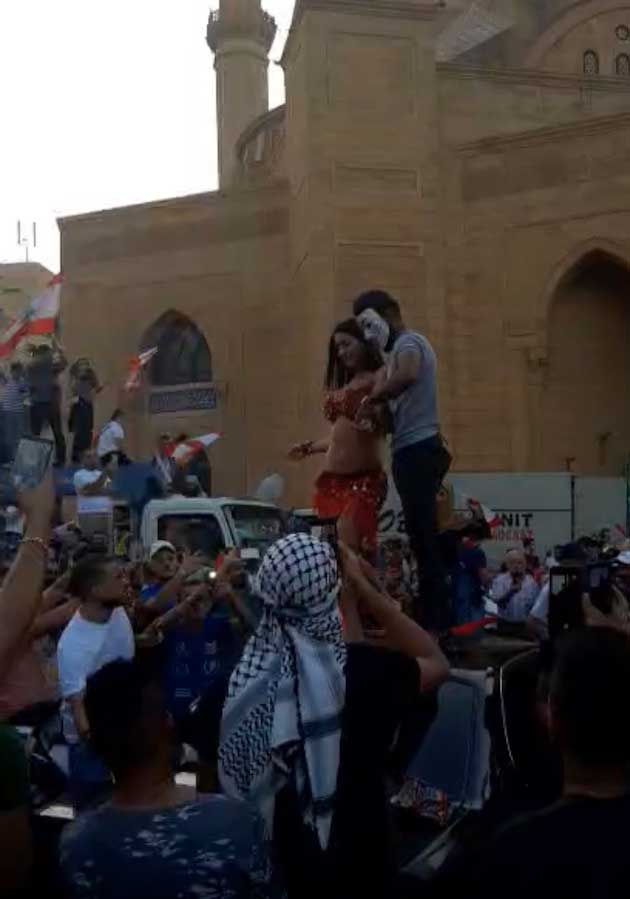 Women played a major role in recent protests in Lebanon. However, this has not translated into political power. Credit: Mona Alami

In Iraq, Women set an unprecedented historical record in the 2021 election. According to an article by the New Arab, 97 female candidates were elected to the 329-seat chamber this year, which equals 29.4 percent of the new Iraqi parliament. This represents 14 more seats than the required quota for female MPs, which is 83, or 25% of parliament according to Iraq’s electoral laws.

The New Arab estimates that the support for female candidates was so significant that 57 MPs will enter the next parliament based solely on registered votes rather than the allocated quota system.

“Conversely, women’s access to politics is restricted in Lebanon. As an example, former MP Dina Boustany only entered parliament after the death of her father. Women get into parliament due to their familial relations,” says Myriam Sfeir, Director of the LAU Arab Institute for Women. “There is a famous saying: ‘women enter parliament as a result of the death of a relative’. Then they leave political life when their male descendant comes of age. In addition, Lebanese political parties are simply more willing to fund men.”

Yaacoubian, who is the only woman to have broken the rules by venturing into politics without the sponsor of a family name, wealth, or the support of a male political leader, underlines that entering political life as a woman is not without cost in Lebanon.

“Women are treated as if they are missing some quality (that men are supposed to have). The prevailing mentality is that men know better, although studies have shown that women tend to be less corrupt and more humane in politics,” she says.

Independent political players such as Yaacoubian, explains Husseini, are often the object of bullying, with efforts made to diminish their value on a personal level or attack their reputation, which would never happen to a male political candidate.

Despite remaining on the sideline of the Lebanese parliamentary life, women have been at the helm of the 2019 protest movement.

They succeeded in easing conflict between separate sectarian regions, such as Ain Remaneh and Chiyah in Beirut, and protected protestors when the riot police attacked them.

In November, three judges, all women, handed in their resignation to protest political interference in the judiciary’s work and the undermining of decisions issued by judges and courts.

“Women are very present, especially as civil society actors. Lebanese women are demanding to be included on decision tables. They are carving a space for themselves in the political world. However, a quota system is essential to ensure better representation in the next parliamentary elections,” says Sfeir.

Women must be brave and persevere at any cost if they want to enter politics, concludes Yaacoubian.