NEW DELHI, Oct 14 2008 (IPS) - While leaders of developing countries have long talked about strengthening cooperation amongst themselves, some say little has been done to translate this into action. At a meeting of the third India-Brazil-South Africa (IBSA) Business Summit in New Delhi, however, discussions were all about turning intent into enterprise. 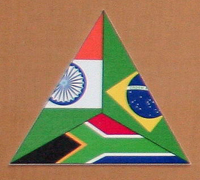 He declared that the three governments were committed to facilitate businesses, create investor friendly climates in their respective countries and to remove barriers to business and trade. The removal of tariff and non-tariff barriers, agreements to change existing laws for co-operation between specific industry sectors and ways to create an enabling environment for greater business contacts amongst IBSA members will be considered, along with a policy to create linkages between institutions – including universities and research organisations.

The Business Summit brought together business and industry leaders from the three countries. Trade targets were worked out, industry specific working groups formed and existing policy roadblocks identified for action at the highest level.

"The involvement of industry would be critical," for the future of IBSA, said Sharma. This is why industry has been involved at every stage of the IBSA dialogue mechanism.

IBSA must also share technologies to enhance South-South cooperation, Sharma added, pointing to the fact that the North had long denied technology to the South through various mechanisms. Developing nations could benefit vastly if this stranglehold created by technology denials could be broken, he said.

Today, the three countries are in a position to share know how in a variety of areas, including nuclear power generation, information technology, and pharmaceuticals, according to Sharma. He cited the example of the generic drugs industry in India which had successfully challenged the dominance of the Western drug companies. In South Africa, the government had to fight a hard legal battle to allow sales of generic drugs that dramatically reduced medical costs. Brazil too had recently allowed generic formulations.

South Africa’s Minister for Trade and Industry, Mandisi Mpahlwa, said one aim of IBSA was to give "greater meaning to South-South Co-operation". The South African Minister’s principal message was that South Africa, despite the ongoing crisis in the global economy, was doing well and was open for business, especially for IBSA members.

Mpahlwa also reiterated that there was commitment at the highest levels in his country to make IBSA "an important player in the global order," which was witnessing, what he termed, "a clash of paradigms". The developed countries were increasing protectionism while telling the developing countries to open up their economies. "This trend made the success of IBSA even more imperative," he stated.

Some participants were, however, far from satisfied by the ministerial pronouncements.

Stavros Nicolaou of the South African healthcare company, Aspen declared: "There has been a lot of talk and now the time has come for action." He said that the three countries had "found themselves three years ago but now needed to adopt tangible goals and start implementing agreements".

He said one reason why business amongst IBSA industries had not taken off was because they were all potential competitors. Everybody wanted markets to open up abroad and yet remain protected at home. "This is a conflict we have to unlock," Nicolaou asserted, and the way to do it was to join hands within IBSA and jointly take on the rest of the world.

The idea to develop products jointly and market them worldwide in the pharmaceutical sector has been discussed by the IBSA steering committee. "But now we need to set up a formalised structure and start implementing projects," Nicolaou stressed.

Rakesh Vaidyanathan, a Sao Paulo based consultant providing business services to the economies of Brazil, Russia, India, and China (BRICS), admitted that IBSA largely remains an initiative at the level of governments.

In the auto-components industry for instance, the IBSA countries have strong players but none of them are multi-locational and therefore cannot bid for global contracts. Vaidyanathan feels that if auto-component manufacturers came together and formed consortia they could compete globally.

Vaidyanathan feels there are a number of areas of potential cooperation. These include ethanol production and pharmaceuticals. For India, he felt, Brazil was a better business destination and technology source than Europe – – which was far too advanced.

South African businessman, Reggie Naidoo, said IBSA was providing a very useful forum for businessmen. "If it was a lot of hot air why are businessmen spending money to attend the summit?" he asked. "It is not just the IBSA summit that matters but what people do after," he stressed.

"We can benefit greatly if we can pick up skills from India," Naidoo opined. IBSA was important because apart from helping big business it would also help create an environment for small and medium enterprises. "It would help if the government could bring together small businesses who stand to benefit the most from contacts," he suggested.

Naidoo’s businesses – shipping and airlines – have benefited from the IBSA meetings. "IBSA is a visionary concept that was promoted by former South African President Mbeki," he pointed out, adding: "Today, South Africa has chosen India as a business partner. So this cannot be all hot air."

Several successful projects testify to the fact that IBSA is succeeding. The Indian Minister, Anand Sharma, pointed out that the new buses on the streets of the Indian capital, New Delhi, were the result of a successful collaboration between India’s Tata and Marcopolo – a leading Brazilian company. A consortium that includes a South African company is undertaking the multi- billion dollar Mumbai airport renovation project. Another South African company has got approval to bring clean coal technologies to India. Brazilian drug companies have acquired assets in India and are looking at ways of cooperation with local generic drug producers.