CAPE TOWN, Jul 31 2009 (IPS) - A global call to put people living with HIV on antiretroviral therapy (ART) at an earlier stage of their illness is intensifying, but most developing countries, especially in Africa, are struggling to meet the current recommendations. 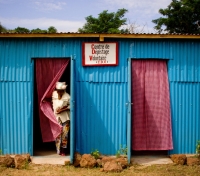 Youth run testing centre in Chad: poor infrastructure and a severe shortage of health workers mean millions of Africans who should be receiving antiretrovirals are not. Credit: UNFPA

Formulated by the World Health Organisation (WHO), the guidelines state that HIV positive people should begin ART before their CD4 count – a measure of immunity strength – drops below the 250 level.

This is in line with the notion that someone living with HIV is technically considered to have AIDS when his or her CD4 count dips below 200 white blood cells per microlitre of blood. At this stage of their illness, the patient’s immune system is often too weakened by the virus to respond to ART rapidly and effectively – hence the recommendation to commence therapy before the CD4 count dips to this level.

Various scientists and members of civil society, however, are now urging governments around the world to make provisions to allow patients to start treatment even earlier, before their CD4 count drops below 350.

The main argument is that the stronger someone’s immune system when starting treatment, the greater the chance ARV treatment has of having a long term positive effect, but there are other reasons.

IPS spoke to Cahn during the 5th IAS conference on HIV pathogenesis, treatment and prevention, which took place in South Africa’s coastal city of Cape Town from July 19-22, 2009. The event drew thousands of HIV experts, scientists and members of civil society from around the world.

Reuben Granich, Medical Officer for HIV/TB in the HIV/AIDS department of WHO, shares Cahn’s views.

"Someone’s viral load is the single greatest risk factor for HIV transmission, and if started with ARVs at an early stage of the illness, the viral load can be reduced to undetectable levels," he said.

"A study conducted in the United States and Canada in 2003-2005 among 17,517 patients showed a 69 percent increase in mortality for those who started treatment at a CD4 count below 350 compared to people who started at an earlier stage of the disease."

Few in the South get ART in time

The problem is that many developing countries that bear the brunt of HIV are not able to meet the current stipulations.

"The median CD4 count of patients in (the Southern Africa) region who started their treatment in 2001 was 87," said Catherine Hankins, senior scientific adviser at the Joint United Nations HIV/AIDS Programme (UNAIDS).

"This means that it is unlikely that they will be able to meet the new guidelines," said professor Hoosen Coovadia, director of the centre for HIV/AIDS at the University of KwaZulu-Natal in South Africa.

"The new recommendations mean more people should get access to ARVs, and this costs more money. Most governments in Africa do not have the budget for this."

Poor infrastructure and a severe shortage of health care workers is another important reason why millions of Africans who should be receiving antiretrovirals are not on treatment.

"In Africa, we require an additional one million doctors, nurses and midwives to meet the needs of the people," said Jacqueline Bataringaya, senior policy advisor at the IAS.

"We have to scale it up, as these serious deficiencies in our healthcare systems disable – among other things – people from accessing ARVs."

The shortage of healthcare workers is partially caused by the fact that thousands of African nurses and doctors are working abroad, said Coovadia.

According to 'New Data on African Health Professionals Abroad', a study that was published by the online journal Human Resources for Health in January, 65,000 African-born physicians and 70,000 nurses were working overseas in developed countries by the year 2000. According to the researchers this amounts to one fifth of African physicians and one tenth of nurses.

"People are leaving for a reason, including low salaries, massive work loads and poor working conditions," said Coovadia. "This is sad, of course, but we cannot stop them. The only way to prevent people from seeking greener pastures is to improve working conditions in African clinics and hospitals."

Political will is therefore important, as a shortage of healthcare workers impacts the distribution of ARVs among people who need it, Coovadia underlined.

"South Africa for instance, is one of the countries that can afford to put more people on ARVs, but in order to do so, the government will have to commit itself to do that. It is all about political will. This means it has to make a choice between purchasing state-of-the-art fighter jets and submarines, or investing in fighting HIV/AIDS and saving its people," he explained.

Putting more people on ARV treatment might seem expensive, but at the end of the day it is a cost-effective way of fighting the disease, Coovadia added.

"It will mean less hospitalisations due to for instance tuberculosis, a major cause of death among people living with HIV. It will also contribute to a more productive workforce, and thus more revenue which you’d otherwise had to spend on people dying."