NOUAKCHOTT, Aug 3 2009 (IPS) - Campaigners against HIV/AIDS in Mauritania face an uphill task to put their messages across, especially those that deal with safer sex and condom use. Campaigners have to cut corners in order to avoid angering the country’s powerful religious clerics. 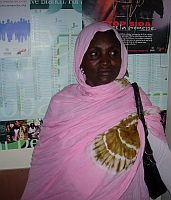 AIDS campaigner Correa Mint Sidi has been publicly condemned in her community for her work. Credit: Ebrima Sillah/IPS

“With a predominantly Muslim population that seeks guidance from the Quran, any advocacy outside the main parameters of religion is more often than not frowned upon, derided and scorned,” says John Sadeed head OF NADOA, an advocacy NGO in Mauritania that promotes attitudinal changes and positive living for those people with HIV.

The latest official statistics from UNAIDS, report that adult HIV prevalence rate is 0.8 percent; roughly 14,000 people are living with HIV/AIDS out of a population of 3.2 million people.

But according to Sadeed, these figures do are unlikely to reflect the full situation. “Mauritanians hardly go for voluntary testing. HIV statistics on the country are mainly sentinel figures obtained from hospital records.”

While the actual infection rate in Mauritania is likely to be significantly higher than the official figures show, it is believed to be relatively low compared to other countries in West Africa.

Keeping it that way could be a challenge.

Corea Mint Sidi has experienced difficulties in her work with women living with HIV. “When I started this community advocacy and outreach programme, men in my community were telling their wives not to have anything to do with me because I was promoting promiscuity… I was also subject of a community tongue-lashing not only from men but even from my women folk,” she said.

“Some religious leaders still refer to us as infidels or non believers who are being used by the West to fight Islam. Now in Muslim country like Mauritania, that is a very serious allegation to live with.”

Activists say taboos against talking about sex are deeply entrenched in the social fabric. “A simplistic way of explaining social problems in Mauritania like HIV/AIDS has been to point accusing fingers at foreigners and blame them for every slice of social misfortune and immorality,” Sadeed told IPS.

In recent years, Mauritania has seen an influx of mainly black West African migrants in the big coastal cities, eager to reach Western Europe through illegal migration using small fishing boats. Migrants’ are frequently accused of involvement in drug dealing and prostitution, and their homes are often raided by police.

Kwame Adaye, a migrant from Ghana, told IPS, “Social taboos against sex outside marriage in Mauritania meant that condoms cannot be sold openly in shops and pharmacies. They are instead handed out in secret by activists and you have to be in this country for at least a few months to know who to talk to about condoms.

“This sometimes forces people into some risky behaviours like unprotected sex. And because of this migrants especially black Africans are seen by locals as the ones spreading HIV in Mauritania.”

An interview with Sheikh Abdoullah Ould Abdoullah, a religious leader in the capital Nouakchott, was a revealing encounter as far as gauging the opinion of the clerics on HIV/AIDS is concerned.

“Muslim leaders in Mauritania will continue to be suspicious of the motives of Western-backed campaigners against HIV/AIDS especially when they are promoting safe sex and condom use,” the Sheikh said. “Our religion forbids that. If they are concerned about HIV/AIDS let them tell people to stop doing things that give them the virus.”

The power and prestige of clerics in Mauritania means that campaigners cannot simply ignore their resistance if the message is to be well-received by the population. “Campaigners against HIV/AIDS are caught between their conviction to right such wrongs and a covert fear not to offend religious and social sensibilities that could alienate the very people we seek to help through the right information,” Sadeed told IPS.

People living with HIV in Mauritania say their status carries a heavy social stigma that makes it difficult to openly and declare your status.

One person, who did not wish to be named, told IPS that “apart from the social worker from Terra Vivante and the medical doctors who treat me, nobody knows about my HIV status, not even my parents…. Because immediately they know, everybody will run away from me and I will be blamed for the cause of my own illness. If you have HIV, people see it has a punishment for being ungodly.”

Malayaine Mohammed, director of development NGO Terra Vivante, says campaigners often restrict themselves to working to working within the constraints their society imposes.

“By talking about condom use or safe sex openly, you are likely going to generate negative reactions even from moderate groups. So what we do here is to talk about those issues like abstinence and loyalty in marital relationships as part of our campaign efforts in order to win the support of the religious leaders.”

Time will tell whether this is enough to prevent the spread of AIDS in Mauritania. A message of abstinence and marital fidelity is flimsy protection against the factors fanning the spread of HIV across Africa: multiple concurrent partnerships, gender inequality preventing women from refusing sex with socially-powerful partners or taking charge of their own protection, and a tremendous amount of basic ignorance about the nature of the virus and how to protect oneself.

Mauritania is taking a fearful risk.