G20: Leaders Agree on Reforms, Poor Still "Out in the Cold"

PITTSBURGH, Sep 25 2009 (IPS) - World leaders at the two-day G20 Summit in the U.S. city of Pittsburgh agreed to work cooperatively to recover from the global economic crisis and create structural reforms with long-term growth as the goal. 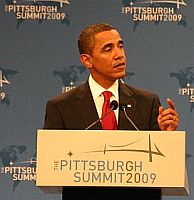 In their end of meeting statement, the heads of the world's biggest economies also vowed to reform banking sectors and raise capital standards, replace the G8 with the G20 as the primary forum for international economic diplomacy, endorse a World Bank-led food security initiative for the world's poorest countries, and commit to phasing out fossil fuel subsidies.

Catching most observers by surprise was the announcement that the G8 would now be supplanted by the G20, a more representative body of the world's most powerful countries but a far cry from the inclusive global governance called for by the world's poorest countries and development NGOs.

"The G20 is more representative than the G8 but there is still no seat at the table for the poorest countries," said Oxfam senior policy adviser Max Lawson. "South Africa is the only African country included in this club. That means when the G20 talks about growth and stability, they are leaving the poorest countries in the cold."

The G20 leaders' decision to endorse a World Bank food initiative also helped keep the world's poorest countries in the spotlight – especially in the context of the global financial crisis.

"We see the urgency of addressing global hunger. Food prices in the last couple years have squeezed incomes. When you're a poor country, 60-80 percent of family income is spent on food," Michael Klosson, chief policy officer of Save the Children, told IPS. "It really is urgent that the world addressees this hunger crisis."

Although details remain to be finalised, the proposed World Bank trust fund would help distribute the food aid from the 20-billion-dollar food security initiative that G8 leaders committed to at their July summit.

NGOs have called attention to the aid commitment, demanding that donor countries ensure transparency and accountability in how food aid is distributed.

"We think this is a good idea and urge that it be implemented as soon as possible. The [World] Bank has a track record and mechanisms in place to ensure transparency and accountability," Klosson concluded.

A commitment to IMF reform was reported to be a sticking point for Obama, who spearheaded the initiative along with a number of the emerging economies, but the final communiqué contained an agreement to shift five percent of the IMF voting power in favour of developing countries at the expense of overrepresented wealthy countries.

It was alleged that this shift was opposed in the morning by the British and French delegations who objected to the reduction in voting power to which they – along with a number of western European countries – would be subjected.

The reform is likely to benefit China and perhaps one or two other emerging economies such as Brazil or India.

"It's important that China does get a fairer representation, but it's not just about countries like China. It's about poorer countries in Latin America and sub-Saharan Africa," Oxfam economic justice press officer Jon Slater told IPS.

The recovery from the financial crisis was a hot topic at the summit as world leaders took stock of the efforts they had committed to undertake at the April G20 summit in London.

"We brought the global economy back from the brink, we laid the groundwork today for longtime prosperity as well," President Obama said at a press conference at the conclusion of the summit. "Still we know there is much further to go."

Obama reiterated his call for bankers to be compensated on their long-term performance instead of rewarding risky and aggressive practices for quick gains.

The G20 communiqué reflected this sentiment, saying that the leaders pledged to "raise capital standards, to implement strong international compensation standards aimed at ending practices that lead to excessive risk-taking, to improve the over-the-counter derivatives market and to create more powerful tools to hold large global firms to account for the risks they take."

In a commitment that was expected and enjoyed wide populist support, the leaders committed to limit guaranteed bonuses for executives and putting a stop to rewards for "risk-taking".

Environmental issues and global warming saw no major breakthroughs and most major commitments on the issue seem to be put off until the Copenhagen Climate Conference in December.

"We will spare no effort to reach agreement in Copenhagen through the United Nations Framework Convention on Climate Change (UNFCCC) negotiations," read the communiqué.

Concerns before the summit had been raised about the possibility of a U.S.-China split in trade policy.

Earlier in the month, the U.S. imposed tariffs on Chinese tyres in a move that many were concerned could spill over into G20 negotiations and, in worst case scenarios, spark a trade war.

U.S.-Chinese relations seemed strong at the summit, where China walked away with what will probably be a significant improvement in its voting share at the IMF and further embedded itself into the international financial institutions and institutions for international economic diplomacy.

The member countries committed to "fight protectionism" and "[bring] the Doha Round to a successful conclusion in 2010."