ROME, Nov 22 2009 (IPS) - The promotion of women’s rights at the global level should not be limited to treating the female population as a gender that is discriminated against and must be protected. 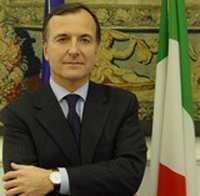 Rather it should focus above all on the value of women as pro-active subjects, irreplaceable and effective vectors of development and peace. Thus, while there is an emergency agenda dictated by dramatically negative developments, there is also a positive agenda, which constitutes the best way of calling attention to the structure role already played by women socially, economically, and politically.

In many areas of the world – the African continent, for example – it is the women who are at the centre of the processes of production and who guarantee the minimal levels of food and social security, in addition to the concrete prospects for development and well-being for their families as well as entire communities.

This is the dimension that Italy has sought to encourage for years in the context of its own development initiatives, promoting women’s access to work and entrepreneurial activities, in part through microcredit and job- training programmes.

Women also play an important role in the prevention and resolution of conflicts and the pursuit of lasting peace, as recognised by resolution 1325 of the UN Security Council, approved in 2000, which called on member states to guarantee a greater presence of women at all levels of decision-making, particularly in crisis prevention, management, and resolution.

It was with a view to the centrality of women in these processes that an original initiative was recently launched by a group of solidarity associations: a call to award a “collective” Nobel Peace Prize in 2010 to all African women, who organise and fight tirelessly for peace and who sustain life even in the most tragic situations.

In fact, African women are increasingly the protagonists and driving force whether in daily life or in the social and political arenas: they constitute a network of informal economic activity and for decades they have been in the forefront of the creation and growth of thousands of small businesses. In addition, African women are making a growing contribution to the defence of health, especially in terms of HIV and malaria.

However, recognition of the role and potential of the female gender and its specific characteristics on different continents, should not make us lose sight of how much remains to be done on the other side of the equation: protection of the fundamental rights of women, and especially the right not to be the target of violence.

Resolution 1325 also recognises how women are the population hardest hit in armed conflicts. But unfortunately it is not only this: violence against women is a blight that convulses the world at every latitude, in peace and war, rich and poor alike, at home and away from home.

Italy is particularly active in this area as well. As President of the G8, for example, we organised on September 9-10 a conference specifically dedicated to violence against women. Italy has carried out numerous projects to call attention to this issue in many areas of the world, particularly the Balkans and the Mediterranean basin, as well as Afghanistan, Mozambique, and West Africa.

Among the numerous actions taken by our country in this context, there is one that Italy has been committed to since the mid-1980s, beginning with Somalia, and which has involved us recently at the United Nations: female genital mutilation. In addition to launching, together with the UN agencies, an international campaign to prevent this practice, last September, at the fringe of the 64th General Assembly, I presided over an initial meeting attended by cabinet ministers from countries which, like Italy, have espoused this cause. And on Nov. 24, U.N. Secretary General Ban Ki-moon invited me to be part of a newly established group of political leaders set on fighting violence against women.

It is issues like this, in which violence has cultural components, that demonstrate how crucial the media are in such an effort, through the grass- roots dissemination of information on the risks of certain practices, reaching people whom it would be unimaginable to reach even through targeted projects or prevention campaigns. Journalists thus have a significant responsibility to shun sensationalism and describe the facts with clarity and accuracy, avoiding stereotyping by nationality, culture, or religion. This responsibility extends to every form of violence perpetuated against women.

In addition to  this challenge, the media have an equally important opportunity to present and publicise concrete examples of the contributions women make daily to building a better society on a global level, a more human form of government that is more sensitive to people’s lives and their communities truly obeys the motto: “people first”.

The international seminar organised by IPS in Rome for November 26 and sponsored by the City of Rome and the Italian Foreign Ministry provides a valuable opportunity to reflect on an issue particularly dear to Italy: the close correlation between the Third Millennium Development Goal and the responsibility of the media.

It is for this reason that, among the conclusions reached by the G8 conference, we wanted to include an appeal to the media to carry out to the fullest their central role, such that they can, on the one hand, contribute to the elimination of denigrating social stereotypes and, on the other, promote with intelligence and persistence a greater understanding of the role played by women as protagonists in the advancement of progress in world communities.