SAN FRANCISCO, Apr 9 2010 (IPS) - In his State of the Union address to Congress, U.S. President Barack Obama promised to end the “don’t ask, don’t tell” policy, which forbids gays and lesbians from serving openly in the Armed Forces. Three months later, efforts to repeal the policy continue to languish in Congress. 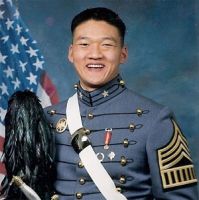 But when Lt. Dan Choi, an openly gay New York National Guardsman, wanted to protest the policy, he didn’t take it to Capitol Hill, but instead chained himself to a White House fence, where he was arrested Mar. 18.

Choi spoke with New America Media editor Aaron Glantz about his arrest and his opposition to “don’t ask, don’t tell”.

Q: Why did you chain yourself to the gates of the White House? A: Pres. Obama has the authority right now to demonstrate leadership. The president has made clear that he wants to see “don’t ask, don’t tell” repealed and the only way you can see repealing this through Congress is for the president to take executive leadership. We needed to make that message loud and clear.

Q: In March, you came out as openly gay on the Rachel Maddow show, but now you have been recalled to drill with your unit. How is that possible? A: In June, I was put on trial [for violating ‘don’t ask, don’t tell’] and they recommended discharge. But now it’s been nine months, 10 months, and I have been recalled to drill with my unit. Our unit is going to deploy and they need experienced leadership. I’ve been deployed to Iraq before.

I graduated from West Point with a degree in Arabic and I speak Arabic with a degree of proficiency. There has been no disruption in my unit [as a result of my coming out]. It is certainly proof that our country can deal with the repeal just like all the other countries in NATO… But in the last nine months, hundreds of soldiers have been kicked out for doing just what I did. The policy must end.

Q: Recently, the Joint Chiefs of Staff testified before Congress and, with the exception of Admiral Mullen, the Chair of the Joint Chiefs, each of them said they had reservations about repealing “don’t ask, don’t tell.” What went through your mind when you saw them testify? A: Being a racial minority, I wondered if those same sentiments about why they had those fears – I wonder, now that we are 60 years across from racial segregation in the military, if you heard those same things about a racial minority, would we have that same kind of reaction? It was insulting. From what I know on the ground, not on a political level but as a military person with personal experience, I know that those things are totally unfounded. But the reason they’re allowed to make these political overtures based on fears and untruths is that the president hasn’t shown any leadership.

When you talk about racial desegregation in Harry Truman’s time, it was leadership that came from the highest military leader. You’re hearing all these incredulous things not only from the lower-level commanders but also from the Joint Chiefs and the retired generals [and] that’s absolutely false. This kind of confusion is rooted in a lack of leadership.

Q: Do you see this resistance in the high level of the military brass against allowing gays to serve openly in the military? A: It’s not outright resistance. You haven’t heard people say, “Absolutely not”, but they express their fears, they express their doubts, they express things that I have never heard from military people. [They’re] expressing this kind of insecurity and discomfort in such a cowardly way. They’re saying that their actions must be based on these fears, and that’s not in keeping with any of the military traditions and for any military leader to allow that. If, indeed, this is a clarion call from the president that this is the right thing to do, then why would you allow any of these wrongheaded things to go out?

Q: Are your parents supportive of what you’re doing? A: [Laughs] Well, that’s another interview. My dad is a Southern Baptist minister. My mother is very conservative and they were both supportive of Proposition 8 and it [my being gay] was very difficult for them. I only came out to them 15 months ago, and when I did they had difficulty understanding the concept of what that means.

I explained to them that I don’t want people in future generations to have to lie to get into the military, I don’t want them to have to be unequal. If they love somebody, they should be able to get married to them. They shouldn’t be fired for being who they are.