NAIROBI, Aug 23 2010 (IPS) - During every year that ends in an even number, the month of August is a special occasion for young men in Kenya’s Western Province. During this month thousands of boys aged between 10 and 18 undergo male circumcision – something that is seen as an important rite of passage into manhood among their communities. But it is also a time were nearly half the young men circumcised will have to fight for their lives. 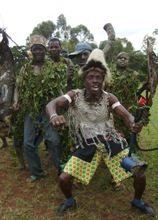 For the Bukusu community from Bungoma District, Western Province, male circumcision is a vital stage of initiation for young boys into adulthood and the practice has been part of the community’s traditions since the 1800s. But the way it is carried out has made it a deadly practice.

According to Dr. Nicholas Muraguri the head of National AIDS/STD Control Programme in Kenya, this year the Bukusu community plans to circumcise about 20,000 young boys in traditional ceremonies – without the assistance of trained medical staff or even properly sterilised equipment. Muraguri says out of the total young men to be circumcised, statistics indicate that 40 percent will end up with complications, some of which will be life-threatening and could lead to death. And the Bukusu are just one of the many communities currently conducting circumcision rites in Kenya’s Western Province.

While safe voluntary male circumcision for men as a key strategy of HIV prevention, Muraguri says some of the cultural practices are likely to increase the risk of HIV transmission and may reverse the potential benefits. This includes instances where one knife is used to circumcise several boys or where boys are encouraged to engage in sexual intercourse soon after the procedure.

According to David Alnwick a senior adviser of HIV/AIDS at the United Nations Children’s Fund, the focus has been to encourage male circumcision among communities that previously did not have the practice. However, parents are encouraged to circumcise their sons shortly after birth. Where neonatal male circumcision is done in medical settings it is rare and unusual that complications will arise.

But adult male circumcision performed by untrained individuals in unhygienic conditions and without proper follow-ups means the complication rate can be high, and severe, potentially life-threatening complications may occur. These often include severe bleeding, bacterial infections, gangrene and mutilation of the penis. Muraguri says there are concerns about the safety of the procedure carried out by traditional circumcisers who have no formal training.

Dennis Kuloba is a traditional circumciser from the Bukusu community. For him it is simple. If a man is not circumcised he is not truly a man. “Men who are not circumcised are not respected in the community and are not allowed to eat on the same table as their circumcised counterparts,” Kuloba says.

But the passage to manhood comes at a steep price. The Bukusu community does not use trained medical staff for the procedure. Instead traditional circumcisers like Kuloba, who acquire the skill of circumcising through apprenticeship, use a traditional double-edged knife called a ‘lutembe’ to perform the circumcisions.

Kuloba says he uses a special mix of clay soil and ash to sterilise the ‘lutembe’. The boys are not put under local anaesthesia to numb the area and instead are expected to be courageous and not show any sign of pain while Kuloba removes their foreskin. But, Kuloba adds, he uses only one knife per boy to safeguard against HIV infection. According to him, those who seek the services of traditional circumcisers are driven by a need to identify with their community’s beliefs which has serious implications for their standing and acceptance in the community.

But Muraguri and his team are trying to find a way to allow young men to hold on to their culture without having to place their lives at risk. “While we respect the cultural aspect of the procedure, we cannot guarantee the safety when done by the traditional circumcisers and what we are promoting is health facility based circumcision,” he says.

It is why government is now offering the service at a drastically reduced price to initiates in the Western Province. In Kenya, the cost of circumcision in a medical facility ranges between six and 12 dollars. This cost is prohibitive for many rural parents who are unemployed and try to make their living selling the produce they plant.

“We have reduced the amount to 200 Kenyan shillings (two dollars and fifty cents) in Bungoma and Kakamega districts during this circumcision period. For those living in far-flung areas away from medical facilities, we are holding medical camps throughout the circumcision period. Here the procedure is done at no cost,” Muraguri said.

He said his team had been successful in persuading parents that it was safer to have their sons circumcised by medical professionals in a sterile environment. So now some of the young men meant to undergo initiation are being circumcised at medical facilities. Later they are instructed on their initiation by their uncles or grandfathers.

But Muraguri is optimistic. Through working closely with communities during circumcision periods he argues that it also provides the perfect opportunity to access adolescent boys and counsel them on sexual reproductive health and gender issues.