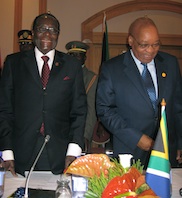 Mugabe delivered the keynote address at SADC’s 30th birthday bash on Aug 17 in the Namibian capital. “When I was a young man teaching in Ghana, the growing of cocoa used to be big. The cocoa would go to Switzerland and chocolates – so very nicely wrapped – would come back,” reminisced the Zimbabwean president.

At the heads of state summit that preceded the bash, Mugabe was not chastised for ignoring the 2008 finding of the regional SADC tribunal that land be returned to 78 white farmers. Rather, the summit resolved to review the “role, functions and terms of reference” of the regional court.

During his address, Mugabe wondered about the continent’s inability to add value to its exports: “How can we fail even to manufacture one chocolate ourselves today?”

Mugabe also complained about the “divisive” nature of the economic partnership agreements (EPAs): “We need better and more effective coordination between the various regional communities to avoid any further fragmentation and ensure that we negotiate from a position of strength.”

Zimbabwe, however, was one of the first countries in the region to bilaterally sign an interim EPA with the Europeans.

“Our destiny is to realise our long-held goal for a continental economic community in which there will be free movement of people, goods and services across the existing artificial borders,” said Kaunda in a speech at the birthday celebration that evoked emotion among delegates.

However, if anything became clear in Windhoek it was that the process of regional economic integration has stagnated. “It remains a challenge to achieve the set targets, given the many outstanding issues,” acknowledged incoming SADC chairperson, Namibian president Hifikepunye Pohamba, with regards to the envisaged regional customs union that was supposed to be launched in 2010.

“Failing to implement our decisions has the real potential of calling into question our commitments and may breed cynicism and frustration among the people of our region,” Pohamba commented further.

It means SADC will go back to the drawing board to devise a more realistic agenda for establishing a monetary union and a common currency. “The recommendation of the macroeconomic convergence committee to the heads of state on the customs union is to have a clear programme by December 2011,” Namibian finance minister Saara Kuugongelwa-Amadhila told IPS on the sidelines of the summit.

“We need to properly identify the parameters for a SADC customs union. Then we need to look at negotiating common policies for the region. Economic integration will happen, because going back is not an option. We have to share the benefits of international trade, or we will be marginalised forever as a region.”

According to Kuugongelwa-Amadhila, the Southern African Customs Union (SACU) that comprises South Africa, Namibia, Lesotho, Swaziland and Botswana could serve as a blueprint for the larger SADC customs union. “The lessons learned from SACU can be used in setting up a SADC structure but there are still aspects of the current SACU structure that deserve attention.”

SACU Executive Secretary Tswelopele Moremi also reiterated that SACU could function as a building block for a wider regional customs union. Although SACU is already struggling to accommodate a possible inclusion of Mozambique under the EPA regime, Moremi was confident there is room to enlarge the union. “This can happen as long as proper accession criteria are laid out,” she told IPS.

While civil society trade experts warn against optimism in the EPA negotiations, Moremi was confident the regional bloc would not fall apart over the controversial trade agreements. “The issue of the EPAs has been overplayed. The worst seems to be behind us,” she argued.

The commemoration of the 30-year existence of the regional organisation was replete with anti-colonial struggle rhetoric and self-congratulatory messages. But a common vision on how to shift SADC’s historically strong focus on peace and security towards realising the project of economic integration remained elusive.

Although Pohamba in his address urged member states to make haste with the tariff phase-down, as prescribed by the introduction of the SADC free trade area (FTA) in 2008, no ultimatums around this were set in the heads of state communiqué, read out late on Aug 17.

Nor was Pohamba’s call to expedite liberalisation of services in six priority sectors, as agreed in the SADC 2009 protocol on trade services, followed up.

The leaders did, however, decide to establish a special task force to look at the technical complications of establishing a customs union; to hold a special summit on economic development; and to move towards a tripartite FTA including SADC, the Common Market for Eastern and Southern Africa and the East Africa Community.

In Kampala in 2008, heads of state decided on the tripartite agreement to cater for overlapping membership of countries of regional trade blocs. But observers have raised questions around the agreement as many countries in the region have not yet succeeded in making the necessary adjustments after the establishment of the SADC FTA in 2008.

Trade blocs also encountered difficulty in formulating a common position on the problematic EPA trade negotiations with the EU.