KIGALI, Oct 8 2010 (IPS) - Despite the availability of a vaccine, 1.3 million people worldwide died from tuberculosis (TB) in 2008, according to the World Health Organisation. Most of them lived in Africa and Southeast Asia. 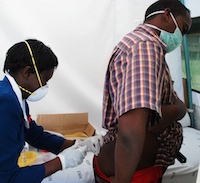 Treating a TB patient in Kenya: work is under way to develop more effective vaccines to prevent the deadly disease. Credit: Julius Mwelu/IPS

Administered to infants throughout the developing world and in certain countries in the developed world, the Bacille Calmette-Guérin (BCG) vaccine, which was invented almost 90 years ago, provides some protection against paediatric TB. However, it only provides variable protection against pulmonary tuberculosis and none at all against other types of TB.

To change this, non-profit research organisation Aeras Global TB Vaccine Foundation has been trying to find a replacement for BCG. The new vaccine, called AERAS-422, is a modern version of BCG that it is hoped will provide long-term protection against all forms of TB. It is about to undergo first medical trials in the United States.

In addition, Aeras is also supporting, in collaboration with Dutch biopharmaceutical company Crucell, the research of four TB vaccine candidates designed as booster vaccine that can be administered to children or teenagers who received an initial BCG vaccination for infants at birth.

Anthony Hawkridge, a senior researcher at the Aeras Foundation, says the booster vaccine clinical trials have now reached Phase IIb and will soon begin in infants in Kisumu, Kenya. Other trial sites will be Worcester in South Africa and Kampala, Uganda, as well as Bangalore, India. Phase IIb is specifically designed to study efficacy – how well the drug works at the prescribed dose.

Q: Why did you choose to conduct Phase IIB of the booster vaccine trials in Africa and India? A: The later phase clinical trials, such as IIB and III, during which one is actually testing whether the vaccine protects against TB, can only be done in areas of the world where there is a lot of TB, where the volunteers are likely to be exposed to TB in their homes, schools, workplaces, villages, and so on.

Q: The currently available BCG vaccine has several downsides: it neither fully protects children from developing TB, nor does it protect adults already infected with TB. Moreover, protection is not life-long. How will the new vaccine change this? A: We hope that at least one of the new vaccine candidates will prove to be more efficacious in preventing TB, not just in infants, but in all age groups and in varied populations, such as people infected with HIV.

We hope that protection will be long lasting, but until we have done the trials and got the product registered and used by a sizeable number of people, we won’t know.

We have data from animal studies and from early phase clinical trials, but it is not possible to extrapolate from that and say that the new vaccines will definitely work. We can only hope that they will.

Q: What are the expected outcomes of Phase IIB of the trials? A: It is difficult to quantify the outcomes. Developing vaccines against TB is extremely difficult.

Even if a vaccine candidate is shown to be safe, well tolerated and immunogenic [able to provoke an immune response] in early studies, it may simply fail at the last stage and not show significant protection.

Or there may be an unexpected safety concern that was not seen in early trials, like it happened with one of the first rotavirus vaccines. However, we are very optimistic about the fact that there are so many apparently good candidates coming through. And we are very hopeful that at least one of them will “go all the way”.

Q: What ethical standards do you set to protect infants who participate in trials? A: Sponsors and investigators conduct trials according to what is called GCP, Good Clinical Practice. This is an international set of standards for clinical research and part of what they do is ensuring that trial participants are protected.

One thing they specify is that any trial protocol is reviewed by a competent and independent research ethics committee whose job it is to ensure that the rights and safety of the trial participants are given due consideration.

But, ultimately, it is the responsibility of the trial’s principal investigator to ensure that the research is conducted according to the highest internationally accepted standards.

Q: If the trials go well, when do you expect the new vaccine to be available? A: Well, for years we have been saying 2015 to 2016. I did not attend the recent TB vaccine conference in Estonia, but I believe that the experts are now saying that it may take a bit longer, possibly until 2020.

Given that the first Phase IIB trial [which will take place in Kenya] is not yet fully enrolled, requires two years of follow-ups, and there still needs to be a Phase III, which will take at least three years to conduct, I cannot see a product being registered before 2017. Maybe 2020 is more realistic.

Q: What impact do you hope the new vaccine will have on TB incidence in Africa? A: It will depend on the vaccine’s efficacy, but without a better TB vaccine it will be difficult to turn the TB epidemic in Africa around.