KIGALI, Nov 8 2010 (IPS) - At Kigali’s Kibagabaga Hospital, 30 young people aged between 12 and 18 years old wait in a crowded holding room, waiting for their turn to see the doctor in charge of prescribing antiretroviral drugs (ARVs). They are among 220,000 children affected by AIDS who are benefiting from social and medical assistance from the Rwandan government and its development partners. 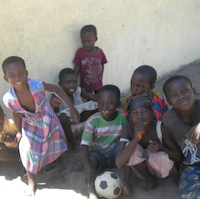 Rwanda is seeking to expand support available to children affected by HIV, like these orphans in Muhanga village. Credit: Aimable Twahirwa/IPS

“Sometimes, these children can’t even go to a doctor to explain their suffering, because they are likely to have fears, and some feel guilty. Most of these [children are] HIV orphans,” said Antoinette Murebwayire, a nurse at the treatment centre. “We are their parents.”

Tunga – not his real name – is a 13-year-old young boy from Samuduha, one of the poorest slums of Kigali. His parents, he says, died of AIDS in 2008 when he was in primary six. Tunga had no idea that he was himself HIV positive; his main concern was taking over the care of his two younger brothers.

The paediatric centre at Kibagabaga Hospital sees around 40 patients each day for testing, counseling and treatment. There are 870 children receiving treatment at the centre; 55 of them on anti-retroviral therapy.

“But the fact that most of these infected children are from vulnerable families, makes it hard for them to take drugs due to hunger,” Murebwayire told IPS.

Kibagabaga offers voluntary counselling and testing to AIDS orphans and Tunga had no qualms about undergoing a test.

“Taking an HIV test was very easy for me, but when I was told that I was HIV positive… it was another story,”  he said.

“When I was first informed about my HIV status, I felt it was punishment for something I had done.”

But Tunga is fortunate to have support from several sources. He and his two brothers live in a house that was built for them by a local NGO in 2009, after the trio was found homeless.

The little family also receives help in the form of the Family Package, a social and medical assistance package the government has implemented for people living with HIV/AIDS. The UNICEF-backed programme offers households affected by HIV and AIDS treatment and counselling, family planning and nutritional support, and income-generating projects.

Child-headed households are assisted with paying for school fees and uniforms, as well as a monthly basket of food.

“When my parents died, I lost hope for my life. But with the support I got, I have managed to educate my young brothers and we did not have to drop out of school,” Tunga said.

The attention paid by Rwanda’s health authorities to the basic needs of children affected by AIDS is welcome, yet more is needed.

An activist with one community-based NGO in Kigali told IPS that many children living in the poorest areas are not aware that free care is available. AIDS orphans and children living with HIV also often lack emotional support, and are isolated from the community around them by a degree of stigma.