MAURITIUS: They Do Politics Differently

PORT-LOUIS, Dec 27 2010 (IPS) - “I do politics every day, but partisan politics? No, thank you,” says Jane Ragoo, long-time trade unionist and social worker. She believes in working to bring about change in society and improve people’s lives but has no interest in clambering onto a truck to campaign for office. 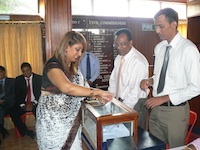 Ragoo, who defends the rights of workers at the Confederation of Private Sector Workers, a trade union, finds politics is a business in Mauritius. It’s focused on profits at the expense of the welfare of the population, she says.

To some extent, Ragoo blames voters for this. “They vote for less competent, intelligent and honest people,” she says. “The few women who are elected have their role diminished, their voices are suppressed and the men who are in majority do not even listen to what the women have got to say.”

The Southern African Development Community’s Gender Protocol commits member states to achieve parity of women in decision-making positions. So far, Mauritius has not yet ratified the Protocol, saying the island’s constitution does not permit the “positive discrimination” necessary to achieve 50-50 representation of men and women.

There are not many women in local councils -in both rural and urban areas. There are only 16 female urban councillors out of a total of 126. On rural councils, this number is even worse. Only six percent – 87 of 1476 rural councilors – are women.

One of these rural councilors, Dulari Jugnarain, from the village of Goodlands in northern Mauritius, feels the presence of more women in local councils could have prevented social ills from creeping into the towns and villages.

Casinos and other gaming houses have proliferated over the past five years in towns and villages, where she would rather have seen libraries, playgrounds and leisure gardens. “Women are more sensitive to such issues and as such, they are better placed to struggle against these social ills,” she says.

But councilors cannot stop the development of gaming houses in their regions unless given power to act. The limited power that local government wields is a disincentive for active citizens like trade unionist Ragoo or Kashmira Banee, a consultant on environmental issues and member of Rezistans ek Alternativ, a socio-political movement working for change in the economic policies of the island.

Banee feels it’s not worth participating in local elections unless the councils are given power to deal directly with problems like poverty, waste management, pollution, noise and street hawking – issues that are a cause of concern for the public.

“I would have entered the political field had the central government allowed local councilors to deal with such issues. This prevents me from contributing more towards the welfare of the society,” Banee says.

Local government is not very effective in the changes Banee would like to see as major projects dealing with public infrastructure, education, health, housing and social welfare are all initiated at the national level.

Local councilors have control over a budget of just a few hundred U.S. dollars, enough to organise modest end-of-year parties for children and the elderly, but nothing more.

Banee says that progress achieved on such issues in Mauritius comes from the work done by NGOs and political movements outside of parliament, who have voiced their concerns through public demonstrations, petitions and awareness campaigns.

Rezistans ek Alternativ itself reflects the lack of women in decision-making position; only three of the 12 members of its national central committee are women. There are, however, many women active in the local branches of this voluntary movement.

Ragoo believes political parties divide the people- she prefers uniting them. She feels it is better to work with children, educating them on human values and environmental protection than to be in mainstream politics.

Few women in Mauritius are able to find time to engage in either electoral politics or social activism, due to the heavy burden women bear with regards to caring for the family. Combined with the decision of women like Banee and Ragoo to forgo elected office, there is a long way to go to increase the representation of women in elected office.

But Lalita Chummun, chairperson of the council in Triolet, a prosperous village in northern Mauritius, is happy with the system of local government. “Though it’s difficult, the councilors are doing a good job, with the help of the central government that provides the funds,” she argues.

Chummun, the only woman on Triolet’s 12-member council, concedes it is difficult for a woman to emerge among the men in politics. “I am mostly involved in the education of adolescents, but I do not have the support from the community. This makes my job difficult. I cannot force people [to help], but when social ills crop up in the village, the blame is put on councilors.”

Other women find very little time to engage in politics — even for the type of work Ragoo is involved in— because, they argue, “We are overburdened by several other responsibilities like taking care of the family and of the society, without forgetting our reproductive role.”