MANILA, May 9 2011 (IPS) - In a small women’s clinic in the congested community of San Andres Bukid in the Philippine capital, a mother of 11 is availing herself of family planning services for the first time in her life. 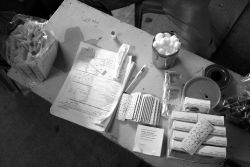 Birth control is making a comeback at clinics in Manila after a 2000 city ordinance discouraged the distribution of contraceptives. Credit: Kara Santos/IPS

After a counselling session with a health worker, she decides to get her first dose of Depo Provera, a hormonal contraceptive given via injection. Never before has she used anything to prevent pregnancy.

“My husband does not want to use a condom because he doesn’t feel good when we have sex,” Aida Bensi tells IPS.

The Bensis are typical in Manila, where couples have an average of five to eight children, says Lina Bacalando, a community health worker for the non-profit group Likhaan Centre for Women’s Health. The city of over 1.5 million is said to have one of the highest population densities of any major city in the world.

And family size is large in Manila because of a city ordinance passed in 2000, which promoted only natural family planning and discouraged all other methods.

That ordinance was the brainchild of a former Manila mayor who also happened to be devoutly Catholic. In addition to preventing women from accessing modern contraceptives from public health facilities, it also had a chilling effect on health service providers who faced reprisals for giving women information about modern methods of family planning.

The current Manila mayor, Alfredo Lim, has not revoked the city ordinance but has allowed non-government organisations (NGOs) like Likhaan and private groups to hold family planning seminars and distribute free contraceptives. However, health centres rely on donations for their supplies.

Liza is another client who now takes advantage of the free family planning services offered by the clinic. She lives in a cramped community of shanties stacked one on top of another, a short walk from the clinic through narrow alleys.

Liza is 38 years old and has 13 children. She takes in laundry to make ends meet; her husband, an alcoholic, is jobless.

As she washes clothes, she jokes that seven of her children have not yet been baptised because baptisms are “too expensive.” At least 80 percent of the Philippine population is Catholic and the church only sanctions natural family planning methods.

She admits that it’s hard to take care of a big family and says it would be even more difficult if she added to her already very large brood.

Bacalando says that before the family planning services were offered in the community, women were giving birth almost every year.

“There’s been a big improvement here in the community since we offered free family planning methods like pills, injectables, IUDs and condoms,” says Bacalando. “Now, we see women in their 30s whose youngest is four or six years old.”

The large family size in communities like San Andres illustrates the Catholic Church’s influence on couples. “They often come to us with misconceptions about modern family planning methods because of what they are told in church—that condoms ‘have holes’ and can cause HIV/AIDS, that pills cause cancer and that IUDs will rot inside their bodies,” adds midwife Imelda Tano, who also works with Likhaan.

Tano says they hold outreach programmes in some of the most densely populated urban poor communities to offer family planning services. “We address the misconceptions and give them the choice of what method will be most effective for them.”

A debate now raging in the Philippines, Asia’s only predominantly Catholic country, is pitting the Catholic hierarchy against family planning advocates. The Church has been adamantly opposed to modern forms of family planning, and public officials have been reluctant to anger the bishops.

Near the entrance to Quiapo Church, for example, bulletin boards are covered with posters of a fetus in various stages of development. “Abortion kills life,” the poster says, also claiming that the pill, IUDs and Depo Provera injections amount to abortion.

In another part of the church, a large sign quotes the late Mother Teresa saying, “How can there be too many children? That is like saying there are too many flowers.”

“Whenever bishops speak out against reproductive health, I want to ask them ‘Have you ever been to the community?’ Come with me and I’ll bring you to the health centre and you can talk to the women there with 10 or 12 kids who want to stop having kids,” says Bacalando.

She says modern methods of contraception help address the grave cases of maternal health that are a harsh reality everywhere. “Even children are getting pregnant. We have a case where a fifth grader, just 12 years old, gave birth. There’s another woman in the community who has 17 children,” she tells IPS.

Apart from maternal health, there is also the problem of poverty. In San Andres, families live a hand-to-mouth existence. Bacalando says many impoverished families here only eat once a day. Mothers often don’t eat, because they would rather give their food to their children.

Women even resort to giving their newborn babies coffee or rice water to drink because they can’t afford to buy milk or food. Others who work during the day or in toxic conditions such as garbage dumps cannot breastfeed.

“Priests get angry with women who use modern family planning methods, but at the end of the day they’re not the ones who have to feed the children,” says Bacalando.