DAKAR, Aug 2 2011 (IPS) - West African health experts are calling for governments to take the prevalence of hepatitis B and C more seriously, and to act to reduce the cost of treatment as part of more effective control of the disease. 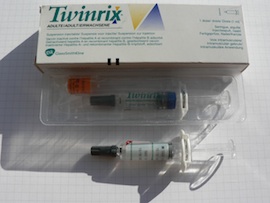 Hepatitis vaccines are a key element in controlling the disease. Credit: Bios/Wikicommons

The hepatitis B virus is responsible for more than 80 percent of liver cancers in Africa, said the coordinator of Senegal’s National Programme Against Hepatitis, Aminata Sall Diallo, during an international meeting held in the Senegalese capital, Dakar, from Jul. 27 to 29.

Hepatitis refers to swelling and inflammation of the liver, which can be caused by numerous factors, including a family of five viruses. The Dakar conference was concerned with the three most common viral strains, which can cause fatal liver damage and cancer.

The hepatitis A virus spreads via contaminated food or water. The B strain is transmitted through bodily fluids like blood or semen, while type C spreads via blood-to-blood contact, such as transfusions. The latter two viruses produce a long-term illness, while type A hepatitis runs its course much faster – many infected people experience only mild symptoms.

The conference aimed to share the issues and challenges facing each country, to identify the best practices for Francophone Africa as a whole, and define common strategies and arguments.

“The idea is to push governments, who have committed themselves, to make hepatitis a priority so that treatment will be accessible to all,” said Diallo.

“The cost is beyond our resources. It requires a million CFA francs (around 2,250 dollars) for a month’s treatment; our grants are not sufficient,” she stressed.

“Our fight is for a focus specifically on long-term carriers of the virus, to offer them treatment, to fight effectively to be able to detect the illness in Africa. It’s the only way to prevent transmission of the disease.”

According to official statistics released in June, 17 percent of the Senegalese population are carriers of one or another form of the hepatitis virus, including 12 percent of children under five and 22 percent of pregnant women. Some 5,000 people die from hepatitis B in Senegal each year.

“It’s necessary to be careful when handling sharp or pointed objects such as those used by tattooists and barbers – shaving equipment, piercing equipment, tools for acupuncture, excision, circumcision and nail clipping…” Mbaye told IPS.

Diéynaba Samaké, the president of SOS Hépatites Mali, a local association, said that nearly one in five Malians are carriers of the hepatitis B virus – 2.6 million people, or half of all young people between 18 and 25 years of age.

“Treatment for hepatitis B [in Mali] remains relatively expensive. At 600,000 CFA (around 1,348 dollars) per month, the cost of treatment is equivalent to several times the monthly salary of an average Malian,” Samaké told IPS.

“There is not, at this stage, any framework for specialised care for hepatitis B, but in the past three years, the government has supported prevention, testing and treatment of hepatitis B and C.”

To reduce the incidence of the disease, Samaké recommends vaccination as the most effective weapon against the strains that predominate in Africa.

The president of the Scientific Council of Cameroonians Against Viral Hepatitis, Njoya Oudou, says his country’s prevalence rate for hepatitis B stands at over 10 percent, and 12 percent for hepatitis C. He believes governments should show greater political will to fight the disease.

“Our network operates with its own resources to educate people, organise refresher courses for doctors, run campaigns and negotiate with pharmaceutical firms. For the moment, we have only moral support from the government,” he told IPS.

Ali Djibo, director general of health at the Ministry of Public Health in Niger, said that the fragmented studies into this disease in his country show a general prevalence rate of up to 14 percent of the population. This places Niger in the group of countries with strong endemicity, he told IPS.

“The precautions to be taken to prevent transmission are, among others, the systematic use of prophylactics and avoiding the exchange of used syringes, scarifications, piercing, group circumcision with poorly sterilised instruments, and excision,” said Djibo.

In Mauritania, some 500,000 people are infected with hepatitis B and around 600,000 others are infected by hepatitis C, according to the secretary general of the country’s health ministry, Sidi Ali Ould Sidi Boubacar. Around 3,500 people die from the two forms of hepatitis each year, he told IPS.

“To better fight against viral infections, the government several months ago initiated an Expanded Programme of Immunisation and implemented a policy guaranteeing treatment after a diagnosis of the virus,” he said.