East Africa Wants to Trade Beyond the EU

KAMPALA, Sep 12 2011 (IPS) - The East African Community (EAC) and European Union head back to negotiations on Monday to resolve the controversy over the delay in signing an economic partnership agreement between the two trading blocs. 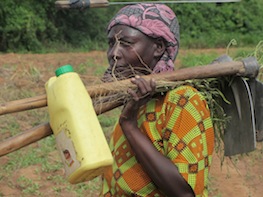 Farmers fear that their produce will not be able to compete with those by EU subsidised farmers. Credit: Wambi Michael/IPS

Economic partnership agreements (EPAs) between the EU and the African, Caribbean and Pacific (ACP) group of countries are aimed at promoting trade between the two groupings. But since 2007 talks between the EAC and the EU have lagged.

EAC and EU officials will meet from Sep. 12 to 14 in Zanzibar, Tanzania to agree on a roadmap to guide the negotiations.

The EAC and EU hope to negotiate outstanding articles in the interim EPA, which include issues of export taxes, the most favoured nation (MFN) clause, rules of origin and agriculture.

Permanent secretaries from EAC member states and EPA experts met in Arusha, Tanzania in June as the first step towards resuming negotiations with the goal of signing the final agreement before the end of 2011.

One of the unresolved issues in the negotiations is the MFN clause, which obliges the EAC to extend the same preferences to the EU it grants to third parties under future trade agreements.

EAC negotiators and civil society groups say the clause could severely undermine South-South trade as it introduces disincentives for the EAC to negotiate agreements with other developing countries.

Dr. James Ndahiro, Rwanda’s representative to the East African Legislative Assembly, told IPS that the MFN clause should be removed or modified to restrict its application to agreements with more developed economies. “We are concerned that the outstanding issues, if not resolved and included in the EPA framework, will bind the EAC to poor trading terms,” said Ndahiro.

Sam Kasirye, a programme officer at the Southern and Eastern African Trade, Information and Negotiations Institute, told IPS that the EU was trying to insulate itself from competition by insisting on the MFN clause.

“The EU will be the biggest beneficiary of the MFN clause because it wants to insulate itself against emerging economies like India and China,” said Kasirye.

The EAC and EU signed the interim EPA, also known as a Framework EPA (FEPA), in November 2007 in order to avoid any trade disruptions with Kenya’s horticulture and fisheries sectors, the country’s leading export earners. Kenya, which is not a least developed country (LDC), would have lost its free market access to the EU as its preferential trade agreement with the bloc was set to expire in December 2007.

The FEPA was signed to safeguard against job losses in Kenya’s horticulture, fisheries and related sectors, as well as the loss of revenue by the Kenyan government as a result of reduced exports.

The EAC’s civil society, politicians and trade experts say some of the clauses in the FEPA are incompatible with the World Trade Organization’s (WTO) provisions and flexibilities accorded to EAC states as LDCs.

Critics of the EPA have raised a red flag against articles of the agreement, which relate to subsidisation, unfair competition and stringent protectionist policies.

One of the other unresolved issues is the agricultural subsidy offered by the EU to its farmers. The EAC is concerned that highly subsidised agricultural products will flood local markets and affect local farmers in its member states.

Members of the East African Legislative Assembly in a June 2010 resolution asked EAC states to halt signing the EPA until the Framework EPA was reviewed.

The EPA deal would require Burundi, Kenya, Rwanda, Tanzania and Uganda to liberalise tariffs on 82.6 percent of EU goods imports by 2033, while the EU would liberalise all tariffs on EAC goods imports, with transition periods for rice and sugar.

Kasirye told IPS that liberalisation of the EAC markets to EU products is one of the contentious issues under negotiation. “The agreement may not favour East Africa if not well negotiated and implemented. Most of the infant industries in the region will collapse once cheap goods from Europe flood our markets,” he said.

Dr. Nathan Irumba, Uganda’s former ambassador to the WTO, told IPS that the EPAs are likely to have an impact on smallholder farmers in the EAC who will not be able to compete with highly subsidised EU farmers.

He said the EU was exerting pressure on the EAC to have the agreement signed, regardless of the outstanding issues.

Benjamin Mkapa, the former president of Tanzania, warned that signing the EPAs in their current form would compromise the future development of the EAC and jeopardise the potential of regional trade and integration.

Mkapa said the EPAs are being negotiated with the misconception that the EU is the EAC’s main partner.

Ridolfi Roberto, head of the EU delegation to Uganda, denied that they were exerting pressure on Uganda to sign the EPAs. “Indeed the EU cannot want the comprehensive EPA more than the region,” said Roberto.

Roberto said the EU has no objection to the EAC’s refusal to open up competition with key products like meat, fish, dairy products, vegetables, fruits and textiles.

Kenya enters the negotiations in a weakened position as it faces pressure to sign the EPAs or risks taxes being imposed on its exports to the EU.