MOGADISHU, Nov 16 2011 (IPS) - Doctors in Mogadishu are warning that famine victims in internally displaced camps have become vulnerable to contagious diseases like cholera and measles, as conditions here are ripe for an outbreak. This comes as internally displaced persons complain that relief aid to some camps has dwindled or stopped. 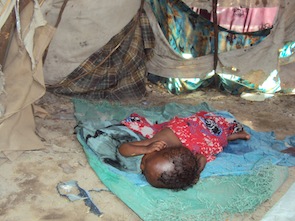 A four-year-old girl with meningitis sleeps in a makeshift tent in Sigale camp. Her parents left her to go beg for aid. Credit: Shafi'i Mohyaddin Abokar/IPS

The leader of a group of Somali volunteer doctors aiding the famine victims living in camps outside of Mogadishu, Dr. Abdi Ibrahim Ahmed, told IPS that sanitation in the camps was of concern and that many did not have access to clean drinking water.

“Conditions in the camps are very ripe for killer diseases. Doctors are ready to contribute their time, knowledge and energy, but we call on the Somali government to take our warnings seriously,” Ahmed told IPS.

He said people at IDP camps have contracted various diseases including upper and lower respiratory infections, measles, malaria and meningitis.

Ahmed said that standby medical units need to be established in the camps, adding that improved sanitation was needed to help prevent the spread of disease.

“If torrential rains fall and there are no mobile teams operating at the camps, I am afraid that contagious diseases will kill many,” the doctor told IPS.

While international aid continues to be delivered to Somalia, relief efforts at some camps have dwindled or stopped.

The Sigale camp on the outskirts of Mogadishu holds more than 3,000 people, according to the camp chairman Mohamed Hassan Sheik Abdi. However, they have not received relief aid since early August.

“We received our last food assistance from Qatar in the early days of Ramadan. Since then no one has come to us. We only heard on the radio that assistance from the international community is coming daily and that food distribution is continuing at some IDP camps,” Abdi told IPS.

He said that every morning mothers and fathers from the camp go to the city where they beg for food and charity.

“They return with what they get in the evening and feed their children who don’t eat all day,” he added.

While the United Nations Children’s Fund built a few toilets in Sigale and other IDP camps, they are not sufficient to meet the needs of the increasing population of these camps. While adults form long queues to use the few toilets at Sigale, children opt to defecate outside.

Also, there is a severe lack of water and women are forced to walk vast distances to find water.

It is no wonder that the drinking water is contaminated and has led to a number of watery diarrhoea cases, now one of the main causes of death at the camps.

According to Abdi, 10 persons, mostly children under the age of five, died from watery diarrhoea, whooping cough and diphtheria at Sigale since late September.

Since August, at least 38 people from Sigale and four other surrounding IDP camps have died from watery diarrhoea and other diseases.

The non-governmental relief organisation Qatar Charity was one of the first agencies to arrive in Somalia with aid for famine and drought victims. The drought has been described as the worst in the East African region in over 60 years.

Duran Ahmed Farah, Qatar Charity country director for Somalia, told IPS said that his agency has provided food aid to thousands of Somalis and now intends to tackle sanitation and health issues at the camps.

“We first tried to do a life-saving campaign because people were dying of hunger and wanted something to eat. Now we are going to establish mobile medical teams that will be responsible for health care at IDP camps,” Farah told IPS.

He added that aid agencies had not stopped their relief efforts but were feeding the new arrivals to Mogadishu.

“The huge need here cannot be met within a short time,” he said.

“We dug the wells at two camps in Hamar-Weyne and Abdel Aziz districts. In January we intend to dig wells at the seven camps that have the highest number of IDPs in Mogadishu,” Abdulaahi Mohamed Saneey, the Somali representative of the charity, told IPS.

The Somali government’s Mogadishu spokesman Mohamed Abdullahi Arig told IPS that the government needed help to prevent a possible cholera outbreak and to prevent other communicable diseases from spreading in the camps.

“The government is more vigilant, but our capacity is too little. We need the international community’s assistance in this sector,” Arig said.