SEATTLE, U.S., Dec 27 2011 (IPS) - Figuring out how to change the world for the better is a daunting challenge, but throngs of passionate people are willing to take on the task. 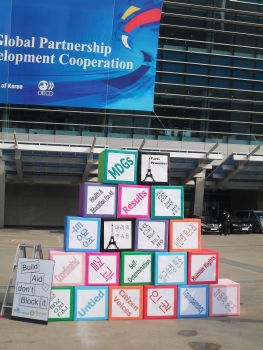 According to a 2009 study at Stanford University, a new non-profit organisation is registered every 10 to 15 minutes in the United States alone. As a result there are as many varieties of aid projects as colours in the rainbow.

How hard can it be? Find a problem and solve it.

Problem: Women in Afghanistan are oppressed.

Problem: Countless children in Thailand are orphaned by a tsunami.

Can aid work really be this simple?

The women’s shopping mall in Afghanistan never caught on, and was later filled with men buying and selling construction materials.

The water pumps were criticised by the U.N. children’s agency UNICEF and the aid organisation installing them eventually suspended its project.

As for the orphanages in Thailand, two that were built ended up seeking out children to fill their empty facilities since most of the children were taken care of by relatives or the government. Many children who did come were brought by poor family members who couldn’t feed them and used the orphanage like a daycare.

What went wrong? Weren’t the intentions in the right place?

Not according to Sandra Schimmelpfennig, who created the blog Good Intentions Are Not Enough. An experienced aid worker and donor consultant, she served as an aid organisation coordinator in Thailand after the massive tsunami struck in 2004 and witnessed the failed orphanage project, and called such bungled ideas extraordinarily common.

“A massive percentage (of the organisations in Thailand) followed a haphazard model,” she said. “A majority of those were run by people with zero experience. Maybe 10 percent really tried to learn from their mistakes.”

Poor models take a variety of forms, but many lack such basic prudence as carrying out needs assessments, consulting experts in local communities, and conducting candid post-project evaluations, according to Schimmelpfennig.

Take Playpump International’s project in Africa. According to the agency’s press releases, it planned to install 4,000 merry-go-round water pumps by 2010. The idea’s novelty attracted millions of dollars from the U.S. government and other donors including several celebrities.

However, it belly-flopped due to the high cost of the pumps, their propensity to break down, difficulty of use and lack of consultation with communities they were meant to help, according to a 2007 UNICEF report. In March of 2010, Playpump International closed and donated its inventory.

As for the women’s market built in Kabul, Afghanistan in 2007, it was inhibited by high product costs and an awkward location which attracted little foot traffic. Funded by the German aid agency G.T.Z. and USAID, it was largely abandoned in 2009.

Other ideas like 1millionshirts.org which sought to collect a million shirts and send them to needy Africans, lacked the most basic of needs assessments. Its founder had never visited Africa or worked on a foreign aid project. The idea was lambasted by critics and was eventually suspended last year.

These types of projects fall under the phenomenon dubbed by Schimmelpfennig as “Whites in Shining Armor,” a misplaced ambition where outsiders feel they are in a special position to help the less fortunate, and rush off to solve problems in other communities.

She cautions that before setting out, a person should think about an outsider coming to their own community and trying to implement a similar project. What seems an obvious fix is usually much more complicated in reality.

Robert Bortner, the director and founder of the Community Empowerment Network (CEN) takes a markedly different approach to aid than simply dropping a solution into the laps of the needy.

“You have to establish what the core root need is,” he said. “People on the ground understand their immediate problems a lot better than we do, they just may not understand the cause.”

CEN, based in Washington State, works to create sustainable development in the Brazilian Amazon by first allowing target communities to decide their own priorities and objectives, then helping them achieve their goals by providing mentoring and training, and assisting them to develop their local economy.

But Bortner understands the propensity to help communities by giving them “things”.

“It’s so much easier to fund things than something social or psychological. It’s easier to talk about and show. But you have to be candid and look at what worked and what didn’t work.”

However, the issue of conducting post-project evaluations is highly contentious. It’s common for organisations to understate failures and spin reports to the point of telling only good things.

“All aid organisations are afraid of bad publicity,” said Schimmelpfennig. “Because donors can’t actually see the results of the work most (groups) do, they get donations almost solely based on their reputation and how well they can sell their own work. If you admit mistakes, then it could get out to the public and then they’d begin to question whether you deserved their money.”

Some donors even look down on evaluations, considering them an unnecessary waste of money, she said.

However, a movement to address failures is gaining momentum. The website admittingfailures.org, created by Engineers Without Borders Canada, allows for people to browse and submit accounts of failed aid projects.

“Conversely, by admitting our failures – publicly sharing them not as shameful acts, but as important lessons – we contribute to a culture in development where failure is recognised as essential to success.”

Before conceiving an aid idea, you should know the people that you’re serving and their needs and create a partnership with local stakeholders, said Bortner.

Shimmelpfennig recommends getting a reality check first by reading aid blogs and seeing what has and hasn’t worked. She also suggests checking her website for ideas on getting started.