LUSAKA, Jan 31 2012 (IPS) - Zhang Daliu, 46, a carpenter from China never imagined himself in the dreadful confines of a stinking and overcrowded Zambian jail where conditions are so terrible that they lead to gastronomic disorders and skin diseases within days of confinement. 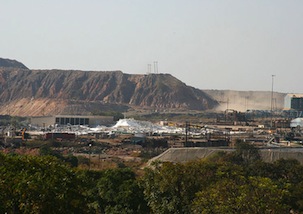 A copper mine in Zambia. When Luanshya’s copper mine closed in 2000 more than 6,000 people lost their jobs, triggering massive poverty. Credit: Blue Salo/Wikicommons

But that is how the dice has fallen for Zhang and three other expatriate Chinese artisans: Hong Pin Liu, 46, a carpenter; Yang Gang Qiang, 36, a welder; and Zhu Xiang, 51, a bricklayer.

The four men are facing a possible life imprisonment should they be convicted of indecent assault and sex with a minor, after charges were brought against them by prosecutors in Luanshya, a town on the southern fringes of Zambia’s mineral-rich Copperbelt Province. Each charge carries a minimum jail term of 15 years with hard labour, with a maximum life sentence.

The four men are accused of having sex with young girls under the age of 16, the legal age of consent in Zambia, in exchange for money.

This sex scandal has started a heated debate in this Southern African country, with some accusing the girls of bringing shame on Zambians by turning to prostitution at such an early age.

Others feel that the problems of poverty and desperation prevalent in Luanshya, which forced the young girls into prostitution, first began during the corrupt regime of former President Frederick Chiluba. Chiluba sold Luanshya’s copper mine in 1997 to the Indian Binani Industries for just 35 million dollars during the privatisation of the country’s mines.

Barely three years after the sale, it fell under receivership and more than 6,000 miners lost their jobs. This triggered massive poverty and hardship in Luanshya, and for the next six years few could afford to feed themselves and their families.

In 2009, when China Non-Ferrous Metals Mining Group acquired the mine, many of those in Luanshya were living in dire poverty. While the sale of the mine meant that there would be jobs again, it also led to the influx of Chinese workers.

The Chinese mine workers, contracted by the Luanshya Copper Mine to revive the former Roan Antelope Mining Corporation (Zambia) copper mine and developing the new Muliashi opencast copper mine, landed in Zambia with a contingent of 270 men, and no women.

Zambia is home to more than 80,000 Chinese of an estimated population of 925,000 Chinese now living and working in Africa, the majority of whom are men working in various jobs in urban and rural areas. In these tough economic times the Chinese here became seen as the only ones with money to spend.

Mary Mumba is a housewife who has lived for more than 20 years in Roan Township, the sprawling high-density mine suburb in Luanshya. She has witnessed the degenerated of the town into a haven for prostitutes, copper thieves and drunken layabouts.

She understands why the young girls offered the men sex in exchange for money.

“Many families here are poor and they will usually go for days without a meal. As parents living in poverty we understand why these girls went so far as to give in to the Chinese. They are the only people with real money in this town,” Mumba complained.

Another resident, Rhoyda Musonda, blamed poverty and the girls’ parents for the scandal.

“We are to blame. These girls were not forced by the Chinese to have sex with them. But as parents I am sure they saw (the girls buy) unusual things, which they could not afford. This should have warned them,” she said.

But Gift Mulenga, a miner in the town, is indifferent about the scandal. He said that here most poverty- stricken young women and girls prostitute themselves to men who have money to spend, regardless of nationality.

“The Chinese just happened to be men of a wrong nationality, that is all,” Mulenga scoffed.

And Mulenga may seem to be right. The rape of minors has increased in Zambia in recent years and mostly Zambian men have been charged with crimes.

Perpetrators include Zambian teachers, farmers, traditional medicine men and even policemen themselves.

Last year three teachers were suspended from the Ndola Girls’ Technical High School, in Copperbelt Province, for having sex with their underage pupils. In the northern district of Milenge, in Luapula Province, a 75-year-old man was charged with raping an eight-year-old girl.

The increased number of cases has led the umbrella grouping for gender activists in Zambia, the Non- Governmental Organizations Coordinating Council (NGOCC), to call for a national consultative meeting later this year.

Engwase Mwale, executive director of NGOCC, says the meeting will map out new strategies on how to tackle the problem.

“It is not good news at all. That is why we want to meet with our members and work out ways of controlling these cases,” she said. She would not speculate on the reasons for the increased number of cases.