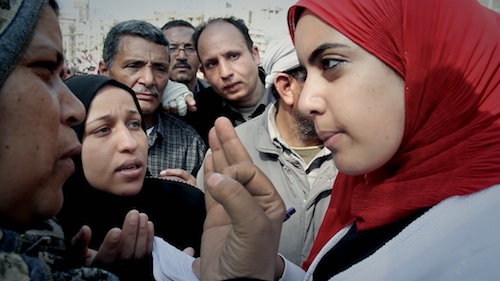 BERLIN, Mar 1 2012 (IPS) - The Arab world is talking about a revolution; not just out on the streets but in films, in newspapers, in songs – using any means necessary to document events, expose the horrors of war and explore the struggles and possibilities that lie ahead as the Arab Spring feels the wintry chill of post-revolutionary democratic challenges.

Caught between repression and the struggle for change, filmmakers have been documenting the tidal wave of transformation sweeping across Arab countries and creating a new, collective culture of resistance.

Many feel the artistic process has been a personal and political quest for reconciling the tensions between Islam, faith, freedom and democracy, but by far the strongest consensus among media makers has been – as Julius Caesar famously remarked while leading his armies across the River Rubicon in Northern Italy – “the die has been cast.”

In another example of life or death journalism-cum- movie making, Irish "teacher" filmmaker Sean McAllister sets off for Sana’a, capital of Yemen, the world’s second most heavily militarised country, armed with a mini camera hidden behind his glasses.

Wishing to film the daily surge of opposition against Yemeni President Ali Abdullah Saleh’s 33-year regime, supported and armed by the West as a bulwark against Al Qaeda, he teams up with Kais, a 35-year-old tour guide who became his guide, central eyewitness and protagonist.

True to Kais’ prophecy, the pair witnesses a "blood swimming pool" rather than "blood bath" during the Friday of Dignity massacre of March 18, 2011 when 52 peaceful protesters were shot to death by government forces.

Sean’s wobbly camera films the chaos, records the horror, the dead and the wounded rushed to the makeshift hospital.

"The Reluctant Revolutionary", a nail-biting personal and political journey, follows Kais from a pro-regime citizen into the heart of the country’s "freedom camps" until, a convert to change, he reflects: "I never imagined seeing rival tribes coming and sitting here in peace, without their Kalashnikovs." The challenges of filming while caught up in turmoil, are portrayed through an unsteady rollercoaster visual ride as McAllister doubles as director and cameraman, unable to hold the camera still for very long.


Filmmakers from Syria, where images of daily civilian massacre slip through the cracks of censorship, brought home the relation between image production and democracy, which has become painfully obvious in the conflict-ridden country.

According to film journalist Alaa Karkouti, Syria has no national commercial cinema and only Hollywood movies and Egypt films are publicly available, resulting in the total absence of a common film culture among civilians.

This was no accident – most authoritarian regimes thrive on placing severe restrictions on the collective imagination of their populations, limiting their ability to conjure up alternatives to the daily routine of repression.

While working on a documentary about the ‘caricature scandal’, a story about freedom of expression circumventing censorship, Syrian producer and film activist Hala Al Alabdallah unearthed a law forbidding the use of “images devoid of commentary”. The discovery highlighted just how insidious repression can be.

But while state forces attempt to control everything from free association to artistic production, resistance and creativity have come together in the squares or “agoras” of the Middle East and North Africa, opening up new public spaces for social solidarity, overcoming collective fears and expressing hope and a new sense of belonging.

For the first time, it seems, the feeling of being a citizen of one’s own country is proliferating among the Syrian masses, buoyed by a cultural resurgence that includes street dancing and turning old folksongs into revolutionary anthems.

“People came to the streets asking for freedom; even in a (muzzled) country like Syria we hear slogans chanting that Syrian people are one. I see the incarnation of freedom in poetry,” said Al Alabdallah pointing out the powerful nexus at work between insurgency, culture and engagement.

Mohamed Ali Atassi, a cultural producer in exile, turned to filmmaking out of psychological necessity, “when I realized I could no longer express the complexity I was feeling without picking up a camera,” Atassi, whose “creative solutions” include obtaining footage from inside the country using the internet and Skype interviews, told IPS.

As revolution and the struggle for change spreads across the Arab World “witness-filmmaking” is emerging, as a formidable art enabled by YouTube – a new form of dissent-inspired ‘auteur’ film. Increasingly, a generation of mobile-savvy youth are becoming gatekeepers of the visual world, archiving that which cannot be denied to people rising up against state power.

Resolutely determined, notepad in hand, Afify took to the streets, a self-appointed witness to the struggle for change.

Her mother, initially an armchair revolutionary following the events on TV from a comfortable livingroom, learned to share, post and tweet in the cross-generational movement for change.

"I don’t really know what democracy means," Heba confesses in the opening sequence of Mai Iskander’s riveting documentary ‘Words of Witness’, "but I want it anyway."

Heba Afify is part of the vanguard of 30,000 activists who broke the wall of fear in order to feel that their country belonged to them again, feverishly writing stories, posting images and lists of missing people online, occupying State Security Headquarters, filming everything they saw and experienced. As her political consciousness began to form, Heba realised for the first time in her life what if meant to feel that "this is my country". Meanwhile, Tunisian filmmaker Nadia El-Fani, who has six legal proceedings pending against her, uses the camera to confront Islamism, and the hypocrisy of a value system not based on the separation of religion and state.

In an act of religious and cultural defiance, she dared to come out on TV as an "apostate" and atheist. She entered and filmed a hidden bar doing good business during the fasting month of Ramadan. "The biggest problem for Arab films and filmmakers is distribution to and access for Arab audiences. I had to pirate my own films to (make them available)," explained El-Fani.

Struggling with residual fear and trauma, Egyptian filmmaker Hala Galal explained that stories about the revolution will need time, maybe even 10 years, to come to fruition.

"Although I have a story I would like to tell I am not sure yet if I want to make a film about the revolutionary events, it was a terrible time," she told IPS at the Arab Spring conference.


“Reporting what is happening is a survival strategy. We went to the streets and we lost friends, hands, eyes. We realised this is no longer an action but a style of life, a choice to be against injustice now and forever,” explained Nora Younis a 34-year old online journalist, human rights activist and founder of Al Masry Al Youm a multimedia company and the Arab world’s first WebTV in Cairo.

Despite her fear, Younis felt compelled to order her newly trained team of young video journalists to “get out there and keep the cameras rolling.” In their toughest assignment yet, the 20-year-olds had to get on the streets and ‘learn by doing’ the dangerous process of reporting a revolution.

One of the video journalists reporters, Ahmed Abdel Fatah, was shot in the eye while filming people being killed on the Qsr el-Nil bridge during the Internet blackout of the 18-day-long Cairo revolution last January.

The resulting dramatic footage was edited into a documentary entitled “Reporting… a Revolution” – a powerful example of witness-filmmaking by six young reporters including Abdel Fatah.

“I am a videographer, my eye is my most precious asset,” he said. “But we will never stop. This is our job, it’s what we know how to do best and we’ll keep doing it.”

Well aware of the contradictions implicit in “guerrilla journalism”, Younis faces a daily struggle with the ethics of journalistic objectivity, as the lines between documenting revolution and revolutionary documentary filmmaking blurred into non-existence.

Many acts of defiance amongst women are increasingly poignant expressions of a new readiness to speak up without fearing the consequences of being heard.

Examples like Aliaa Magda Elmahdy’s subversive act of posting a nude photo of herself was seen as a groundbreaking statement on the dignity of the naked female body trapped in a gender power struggle.

“The nude picture is indicative of a new state of fearlessness and this gives me hope because an incident of this kind would not have occurred before the revolution,” pointed out Viola Safik, a German- Egyptian documentary filmmaker talking in Berlin about changing perspectives in the Arab world.

Safik also warned that the opening up of cultural frontiers could lead to an era where art will become more aggressive, potentially engendering violent backlashes, like the power of the regime to label cultural producers as “traitors” or “unbelievers”.

Undeterred, women are slowly and tentatively facing the camera. Long-repressed controversial issues like marriage freedom, the meaning and implications of financial independence, tradition, what to accept and what to refuse, were all central questions in Hanan Abdalla’s debut documentary “In the Shadow of a Man”.

Born in the backstreets of Cairo, 69-year-old Wafaa, the documentary’s protagonist, looks back at the “honour” check she was forced to submit to on her wedding night and has no qualms or regrets about her divorce, though she sadly never recovers a sense of respect for men.

As violence rages throughout the Arab world, with the spotlight largely on Syria and Bahrain, Berlinale Festival jury-member Boualem Sansal, the Algerian novelist and poet, pointed out that Algeria has somehow escaped scrutiny, despite the fact that president Abdelaziz Bouteflika “strangles his people morally and culturally, an act that is tantamount to cultural genocide,” Sansal said on the last day of the Berlin film festival.

His words are a sombre reminder that the die may be cast but crucial dominoes in the Arab world have yet to fall; and when they do, the cameras will be rolling.