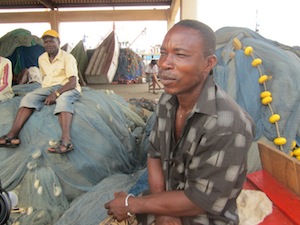 “Before, your boat was full,” says Thomas Essuman, a 20-year veteran of the seas around Takoradi- Sekondi, a city in western Ghana. “Now, you don’t get fish like before.”

As the number of fish continues to decline in this West African nation, those who rely on the sea say they have no choice if they want to catch enough to survive.

“If you don’t use those things, your net will be empty,” says Essuman.

He says that many use light to attract fish. Others use the pesticide DDT (dichlorodiphenyltrichloroethane) to poison fish, or dynamite, to kill large numbers that can be scooped up.

Fisherpeople know the practices are harmful, Essuman says. “They will destroy the country because fishing brings life. If you spoil the sea, the fish don’t come, and how are you going to earn money?”

Samson Falae, who has been fishing in western Ghana for 30 years, says dynamite scares fish out to deeper waters, and boat owners have to use more and more fuel to follow them.

“If you go far out and you don’t get enough fish, you can’t afford to go the next day,” says Falae.

Ghana released regulations to govern fishing in 2010, prohibiting many of these common practices. The regulations also restrict mesh sizes and types of nets, areas where fishing is permitted and sizes of fish that can be caught.

Alex Sabah, the director of the fisheries department in Ghana’s Western Region, says fish stocks are in danger of collapse. There are an estimated 200,000 Ghanaian pirogues now fishing, as the fisherfolk strain to feed an ever-larger population. Boats are going about three times further out to sea than 10 years ago to find fish.

And, he says, they are catching baby fish, small fish that serve as food for larger species, and are decimating sensitive areas such as estuaries. Only one of 30 common fish species in Ghana’s waters is not considered threatened, he says.

“They are destroying the stocks. If the stocks collapse…The little pain now of regulation is better than the bigger pain later.”

But, Sabah says, “We are having a hell of a time stopping it.”

Shortly after the regulations came out, fisheries officers, police and the navy cracked down, making arrests, seizing equipment and laying charges.

Fisherfolk did not take kindly to the new measures, and the situation deteriorated into violence and demonstrations.

“There have been clashes with the navy,” says Sabah. “We arrested a number of them and put them before the courts.”

He says enforcement is hindered by a lack of political will and, at times, interference by politicians eager for votes from the millions who rely on fishing in this West African nation of 25 million people. Politicians have phoned the department and ordered enforcement efforts to stop, says Sabah.

“In that situation, we are helpless,” he says.

Sabah says the introduction of regulations should have been handled differently, and that they are working on a new strategy. The department, he adds, needs to do more to educate fisherpeople on the effects of illegal fishing practices and to win their support for conservation efforts.

The fisheries sector sustains millions of West Africans – as much as a quarter of the workforce, according to the Environmental Justice Foundation (EJF), a London-based charity focused on environmental abuse.

EJF notes fish stocks are under siege from foreign boats illegally harvesting off the coast. The group estimates that sub-Saharan Africa loses about one billion dollars to illegal fishing annually.

But Sabah does not attribute all of Ghana’s troubles to foreign boats. “We cannot blame it all on them,” he says. “Our local fisherfolk are using the wrong procedures.”

“They understand the issues, they know that something must happen,” said Agbogah, whose organisation is implementing a USAID (the government agency providing United States economic and humanitarian assistance worldwide) programme on coastal and fisheries governance.

“But if something happens, will he (the fisherman) get food to eat tomorrow morning? Once you take the net from the guy, he will be prepared to die.”