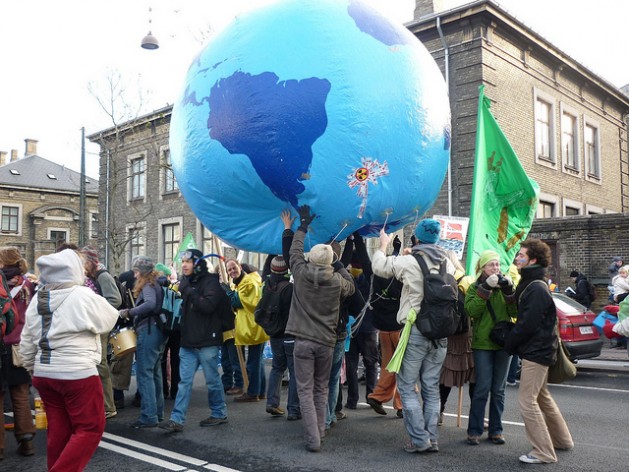 WASHINGTON, Jun 15 2012 (IPS) - Just ahead of the start of the United Nations Conference on Sustainable Development (Rio+20), many are worried about the influence that corporations will have on the summit’s agenda.

Friends of the Earth, a grassroots environmental group, is one of the groups concerned about the influence that private sector lobby groups hold over the U.N.

“Increasingly we see U.N. policies that do not serve the public interest but rather support the commercial interests of companies or business sectors,” the group said in a statement. “The U.N. is captured by the corporate sector.”

A petition released by Friends of the Earth, described as a “civil society statement to reclaim the U.N. from corporate capture”, has received several hundred signatures from activists from Catalonia to Canada.

One of the top priorities of the Rio+20 summit is to discuss ways in which to offset the global impact of consumption, urbanisation and pollution. Also on the agenda is the transition to a “green economy” – a new economic paradigm that limits the toll of ecological and environmental loss.

According to a United Nations Environmental Programme (UNEP)-backed study on the 3,000 biggest public companies in the world, the total cost due to corporate environmental damage was 2.2 trillion dollars – approximately equal to the total GDP of the world’s eighth-largest economy, Italy.

Most of the cost is attributed to emissions of greenhouse gases, local air pollution and the depletion and pollution of fresh water.

There are numerous civilian protests and campaigns scheduled in anticipation of the Rio+20 summit. The Occupy movement is also planning to have a presence at the movement and have released a “people’s petition” online, with one of the main issues protested in the petition being the role of business lobbying at the talks.

Daniel M. Kammen, professor of public policy at the Goldman School of Public Policy at U.C.-Berkley, disagrees that business involvement has a negative effect, saying that business plays a crucial role in the talks.

“It has to be part of a conversation, of a dialogue,” he says. “Without the private sector, the climate just becomes a debate between national leaders.”

U.S. President Barack Obama has received criticism for his policies regarding corporate interests, much to the chagrin of environmental activists and labour unions.

A document recently leaked by Public Citizen, a consumers’ rights group, found that under new trade provisions, multinational corporations operating in the U.S. would be able to appeal laws regulating trade to a more-lenient international tribunal, which has less strict measures on environmental policy.

Brazil has itself recently been the victim of corporate environmental pollution. In March, FUP, the Brazilian oil workers’ union, filed a lawsuit against the American energy company Chevron and the offshore drilling corporation Transocean, as the result of offshore oil spills off the coast of Brazil last November.

The lawsuit attempts to revoke those companies’ abilities to operate within the country of Brazil. The oil spill leaked about 3,000 barrels of oil into the Atlantic Ocean.

Transocean, one of world’s largest offshore drilling corporations, was also involved in the 2010 BP oil spill that released 4.9 million barrels into the Gulf of Mexico, the largest spill ever in U.S. territory.

Previous summits have dealt with these kinds of problems. The 1992 Earth Summit in Rio took place a year after the Kuwaiti oil fires and Gulf War oil spill, the largest oil spill in modern history.

The U.N. has taken steps to improve energy efficiency, in an effort to negate the rampant need for oil, through the Sustainable Energy for All initiative, spearheaded by U.N. Secretary-General Ban Ki-moon. The proposal was meant to correspond with an increased focus on global economic and environmental sustainability.

“If current patterns of production and consumption of natural resources prevail, and cannot be reversed and decoupled, then governments will preside over unprecedented levels of damage and degradation,” said UNEP Executive Director Achim Steiner.

In its quinquennial report, UNEP stated that globally there had been significant progress on only four of the 90 most important environmental issues that they had previously laid out, indicating that humans consume at their own expense.

The resulting depletion of biodiversity and resources in the two decades between the conferences threatens to get worse.

“We will face even greater economic and environmental disaster in the future if we do not urgently address the loss of our natural capital and reset our economic compass,” Pavan Sukhdev, an adviser to UNEP, said.

“We have an ethical duty to act now – to delay is immoral.”