Jun 16 2012 (IPS) - Europe and 79 of its former colonies have sent a strong message to the U.N. Conference on Sustainable Development in Brazil next week that it should use the opportunity to both fulfill past promises and deal with “new and emerging challenges”.

Europe and the African, Caribbean and Pacific (ACP) grouping ended their joint ministerial conference here Friday by urging the international community to deliver on its commitment to help developing countries deal with the impact of climate change and other environmental issues as well as achieve sustainable development goals (SDGs) by at least 2030. 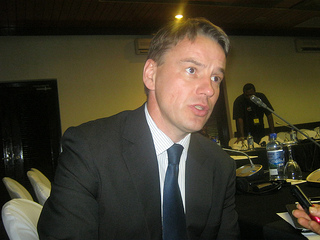 In a joint declaration, they said the U.N. conference, better known as Rio+20, provides “a unique opportunity to ensure a renewed political and international commitment for advancing the sustainable development agenda” and that they must adopt decisions coherent with the outcomes of earlier conferences such the Durban Conference on Climate Change, the Nogoya Conference on Biodiversity and the Changwon Conference on Diversification.

Both Europe and the ACP have pledged to work “constructively” during the Jun. 20-22 conference in Brazil “to ensure an ambitious and action oriented outcome that would advance the sustainable development agenda in a comprehensive manner, on the basis of common but differentiated responsibility”.

Danish Minister for Development Cooperation Christian Friis Bach told reporters that that the declaration “is a statement that emphasises that the green economy is a win-win opportunity and suddenly we have turned the environment and climate negotiations a little bit on the head”.

He said that instead of looking at constraints and quotas, “We are looking at opportunities and investments in coming together and building a green economy as a building block of sustainable development.

“It is a statement that stresses the need for institutional innovation in sustainable development, creating a mechanism that can hold us accountable by having a review mechanism and strengthening the United Nations.

“It is a statement that also stresses the need for improving our management of marine resources and the oceans in what is called the Blue Economy – a message very critical for this region (the Pacific)” said Bach, who is also president of the European Council.

Alva Baptiste, St. Lucia’s foreign affairs and international trade minister, said that the European Union and the ACP grouping will go to Rio with a common platform, with the essential aspects being “the continued commitment to the fight against poverty, strong commitment to sustainable development, dealing with new global challenges such as climate change, energy, food security, water, the environment and biodiversity”.

He said regarding the so-called “Blue Economy” the fundamental aspects of that would include technology transfer capacity and financing.

“We also note that Small Island Developing States (SIDS), Least Developed Counties (LDCs), landlocked ACP states and countries affected by drought, desertification and floods are particularly vulnerable to the impacts of those trends as well as the impact of natural disasters and their increased frequency,” the declaration said.

It also calls for the transformation of the United Nations Environmental Programme (UNEP) into an international specialised institution for the environment, based in Kenya.

According to the declaration, Europe and its former colonies agree that in order to achieve success in Brazil, the agreed themes of sustainable development, green economy and poverty eradication “must be addressed with the understanding that each country is free to determine its own path to development”.

Bach described as a “unique achievement” the coming together of the EU and the ACP countries in sending a strong message to the rest of the international community particularly as it relates to “sensitive issues” such as governance, sustainable development and the green economy.

“Those are sensitive issues in the negotiations and here around the table we have been able to reach a consensus and that is an important signal,” he said, noting that the negotiations would also depend on the means of implementation and not only finance.

“It’s under very difficult circumstances and I am not saying it is going to be easy to achieve it, but the commitment is there,” Bach added.