Climate Change Takes a Bite Out of Global Food Supply 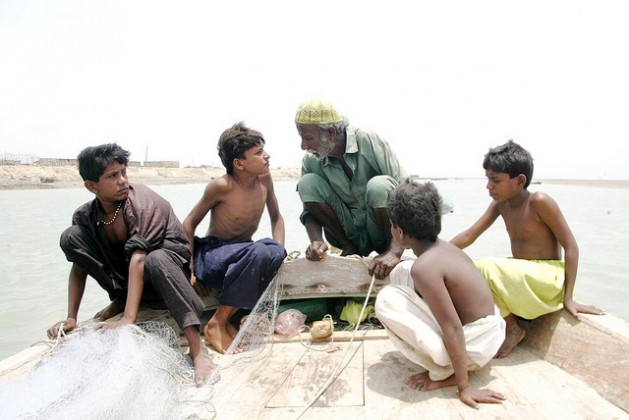 A Pakistani fisherman talks with young boys. Rising ocean temperatures are pushing many fish away from the tropics towards the poles where waters are cooler. Credit: Akbar Baloch/IPS

MONTEREY, California, Sep 29 2012 (IPS) - Humanity’s ability to feed itself is in serious doubt as climate change takes hold on land in the form of droughts and extreme weather, as well as on the world’s oceans.

Less well known to many is the fact that emissions from burning oil, coal and gas are both heating up the oceans and making them more acidic. That is combining to reduce the amount of seafood that can be caught, according to a new report released here.

Seafood is a primary source of protein for more than a billion of the poorest people in the world, said Matthew Huelsenbeck, report author and marine scientist at Oceana, an environmental NGO.

“For many island nations like the Maldives, seafood is the cheapest and most readily available source of protein,” Huelsenbeck told IPS.

The Maldives, Togo and Comoros top the list of nations whose food security is threatened by climate change, according to the report, “Ocean-Based Food Security Threatened in a High CO2 World”, which ranks the vulnerabilities of nations. Surprisingly, Iran is fourth on that list. This is the first-ever look at how climate change may affect food security for countries that are dependent on fish and seafood.

The report was released this week at the Third International Symposium on the Ocean in a High-CO2 World: Ocean Acidification, where nearly 600 scientists from around the world presented their research.

Rising ocean temperatures are pushing many fish away from the tropics towards the poles where waters are cooler, researchers have documented. And in a well-understood process, human emissions of CO2 have increased the acidity of oceans by 30 percent, threatening fish habitats such as coral reefs and thinning the shells of shellfish like oysters, clams and mussels.

The report examined every country’s exposure to climate change and ocean acidification, its dependence on and consumption of fish and seafood, and its level of adaptive capacity based on several socioeconomic factors, said Huelsenbeck.

A number of countries in the Middle East like Iran, Kuwait and Libya make this list because of the high vulnerability of the Persian Gulf to climate change, with an expected 50-percent decline in fisheries. Ironically, those nations are major oil-producing countries.

Tropical countries that are dependent on coral reef fisheries are also amongst those whose food security is most threatened.

“Seafood is the only source of protein in large parts of the world. And for many local fishers, if they don’t catch fish, they go hungry,” Huelsenbeck said.

The report is an attempt to alert countries to the fact that ocean acidification and warmer oceans will affect their ability to feed their people in the future. “They need to know if they are at risk,” he said.

It is important for countries to know what the potential impacts of ocean acidification might be, said oceanographer Carol Turley from Plymouth Marine Laboratory in the UK.

“Science can also look at the potential to adapt and manage this risk through monitoring, looking at the potential of doing things like growing more sea grass to pull carbon out of seawater,” Turley told IPS.

Huelsenbeck notes that his report is conservative and not the last word on what will happen to future fisheries. There isn’t a lot of data for some countries and other impacts of climate change such as sea level rise, reduced oxygen levels, changes in the nitrogen cycle are not included, he said.

“No one knows what the combined impact of all this is,” he added.

On land, the fingerprints of climate change are far clearer with worsening droughts, extreme weather and the record melt of Arctic sea ice. This year’s drought in the U.S. and extreme weather elsewhere has pushed food prices up, with corn rising to its highest price in history.

“The world price of food, which has already doubled over the last decade, is slated to climb higher, ushering in a new wave of food unrest,” said Lester Brown, author of the new book “Full Planet, Empty Plates: The New Geopolitics of Food Scarcity”, in a press release.

“As food prices climb, the worldwide competition for control of land and water resources is intensifying,” said Brown, president of the Earth Policy Institute, an environmental NGO based in Washington, D.C.

Millions of households now routinely experience days when they will not eat each and every week. A recent survey by the NGO Save the Children shows that 24 percent of families in India now have foodless days. For Nigeria, the comparable figure is 27 percent. For Peru, it is 14 percent, Brown writes in his book.

The world’s poorest spend up to 75 percent of their income on food, said Oxfam’s Climate Change Policy Adviser Tim Gore. A new report by Oxfam called “Extreme Weather, Extreme Prices” found that extreme weather in less than 20 years could push up prices 120-140 percent above the average food price in 2030, that will already be double today’s prices.

If this happened today, a 25kg bag of corn meal – a staple which feeds poor families across Africa for about two weeks – would rocket from around 18 to 40 dollars, the report said.

“The huge potential impact of extreme weather events on future food prices is missing from today’s climate change debate. The world needs to wake up to the drastic consequences facing our food system of climate inaction,” Gore said in a statement.