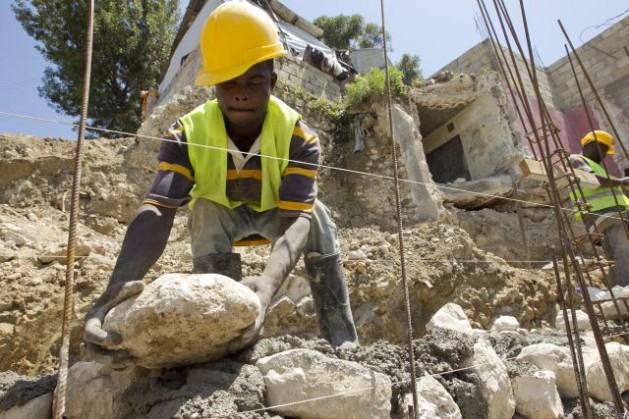 The Haitian government and international agencies are ramping up their efforts to relocate the people still living in camps across Haiti after the Jan. 12, 2010 earthquake. A worker clears rubble at a construction site in Port-au-Prince on Sep. 7, 2012. Credit: UN Photo/Logan Abassi

“It is gonna help the NGOs, the serious NGOs, and it is gonna weed out the bad apples,” Lamothe told IPS after the meeting.

“We have a new coordination unit for NGOs that will have guidelines and standards to abide by. So there is a continous effort and push to monitor what the NGOs are doing,” he said.

The event, organised by the U.N. Development Programme, took place during the 67th session of the U.N. General Assembly. The roadmap presented at the meeting is intended to help the Haitian government to supervise the 560 NGOs registered as working in the Caribbean state.

The roadmap points out that the responsibility of all prioritisation of efforts shall rest in the hands of national authorities, in order to avoid fragmentation of efforts.

Poverty-stricken Haiti already received international humanitarian aid before the 7.0-magnitude earthquake that hit the country on Jan. 12, 2010. But after the disaster, which left approximately 300,000 dead and 1.5 million people homeless, Haiti has received so much funding aid through foreign NGOs that the country has been nicknamed “a republic of NGOs”.

The aid has not always been helpful. John Chaloner, representing CCO Haiti, a consortium of international NGOs operating in the country, lamented that cooperation problems between NGOs were “common and all too frequent” after the earthquake.

About two-thirds of Haiti’s budget currently comes from foreign assistance.

Rebecca Grynspan, U.N. under-secretary general and associate administrator of the United Nations Development Programme, said that the international community has to focus more on “backing national institutions” in Haiti. Grynspan called for a “transitioning from humanitarian aid”.

But Grynspan also stressed that NGOs have offered, and are still offering, vital help to Haitians, including health services, shelter, education and food aid.

These groups will continue to play a crucial role as more than two-thirds of the population lives on less than two dollars a day, and the state offers little social security.

Prime Minister Lamothe agreed with her, emphasising that according to the new roadmap, the government will have greater authority to oversee aid projects in Haiti. “It is all a question of organisation,” Lamothe said. “There was a lack of leadership before.”

Lamothe acknowledged that this will not be an easy task for the government, in office since last year. The unemployment rate in Haiti is currently over 70 percent, and over 80 percent of the economy remains informal. “We are not getting enough tax revenue,” Lamothe said, lamenting how the financial difficulties limit the government’s ambitions.

In the long run, Haiti needs to boost its own agricultural production and industry, according to Lamothe. “We do not want to continue to be known as an NGO nation,” he said. “Haiti needs to start producing and stop importing.”

Film star Sean Penn, founder of J/P HRO, an NGO operating in Haiti, said that “NGOs’ primary job is to put themselves out of business.” This is yet not possible in Haiti, he conceded, adding that, “Instead, we must create sustainability.”

Out of the 1.5 million Haitians left homeless by the earthquake, 1.1 million have been relocated. But the remaining 400,000 are still living in tents. Penn expressed special concerns about security in the camps, after numerous incidents of assault and rape.

Penn also said that “serious security issues” throughout the country are discouraging international companies from investing there and slowing down economic progress.

Still, Penn believes the outlook is positive. “Haiti is on the verge of letting us all see the fruit of our work there,” he concluded.