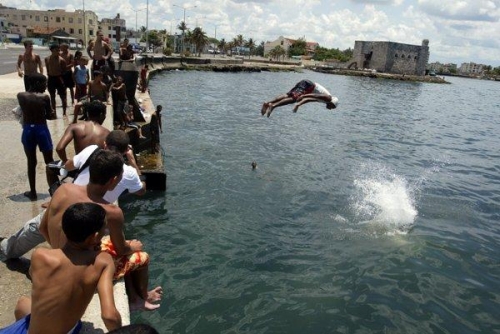 HAVANA, Sep 19 2012 (IPS) - Mabel Suárez, a 22-year-old Cuban woman, can’t concentrate on enjoying her youth. She helped take care of her great-grandmother for two years, and she knows that, whether she likes it or not, it will fall to her to take care of her grandparents and parents in their old age.

Enjoying her youth “was something my mom was able to do. She was one of two children, and they had a family that was quite large and relatively young. Now the years have passed, I’m an only child, and a good part of my family lives outside of Cuba. When my great-grandmother got sick, I had no option but to take care of her,” Suárez, a university student, told IPS.

“I loved my great-grandmother very much, but I would have preferred not to have to go through that. It was crazy. I would rush home from my classes so that my mom could go to work. For more than a year, it was either the university or home, without even thinking about going to a party or anything.”

The responsibility of taking care of the elderly is beginning to fall on Cuba’s young people. To what extent is one of the questions that will be revealed by the Population and Housing Census, which is being conducted from Sept. 15 to 24.

It is not just a question of Suárez spending her life as part of a clear minority in dealing with the aging of her loved ones; when she herself begins to grow old, there may be very few people around her in a position to take care of her.

Cuba is one of the countries in the region with the most advanced and accelerated aging process, according to the Latin American and Caribbean Demographics Centre.

Perhaps it is this context that explains why a study conducted among students at the University of Havana found fear of aging, which most of those interviewed identified with decline and loneliness.

In addition to uncertainty, the study found “sadness, concern and fear of loneliness, of not being taken care of or paid attention to by one’s family,” said a summary of the study, published in 2011 by the online newsletter of the Luis Montané Department of Anthropology of the University of Havana’s Faculty of Biology.

According to the study, “The social representation of a group of university students regarding aging”, those surveyed feared they would be ignored by society once they were old. Along the same line, they said that older adults needed to be better understood, and more respected and valued by Cuban society, because they were living through “a stage of experience and wisdom.”

Given the social devaluation of aging in Cuba and in the rest of the world, “the big challenge for Cuban anthropology, therefore, could be its ability to conduct studies…that help people, as they go through old age, to feel useful and to participate in the diverse tasks of the community where they reside,” the newsletter said.

“We have to realise that in a decade, there won’t just be more old people,” sound engineer Rodolfo García, who has been self-employed for the last year, told IPS. “My generation, which is now entering its 50s, attended university almost en masse. It is a very well-educated generation that will try to lengthen its useful life, and that will face aging differently than our parents did.”

A project for encouraging new models of intergenerational relations is being sponsored by the Centre for Health Promotion and Education in the central province of Cienfuegos, with support from the United Nations Population Fund (UNPF).

It is a matter of promoting relationships based on “respect and communication,” in addition to “tapping into the experiences and knowledge of older people without impositions, in spaces where they can share, and where useful elements can be contributed to each participant to ensure his or her health,” Dr. Graciela Martín, the centre’s director, told IPS.

According to a document on the project, which is being implemented in several Cienfuegos municipalities, “older adults know that they are necessary and that they are important reference points, even in societies where being old is not valued.”

“Development contributes to the survival of the elderly, but it has not always placed at their disposal the possibilities for using their abilities and satisfying their needs,” the document says. The preconception that equates aging with a “problem that is inevitable and bearable until death ends it” needs to be overcome.

This strategy is based on the creation of informational foundations, for raising awareness among the population and state institutions; educating young and middle-aged people about aging with quality of life; implementing programmes for services for older adults; and developing a culturing of aging as a dynamic element in society.

“By creating a culture of health, we are forming an extensive treasure trove of knowledge and reasoning that people use as a starting point for their information. When people face life from that perspective,” they can discern between positive and negative, even at an advanced age, Martín said.

In essence, it is a matter of contributing to “a positive attitude toward life,” she added.