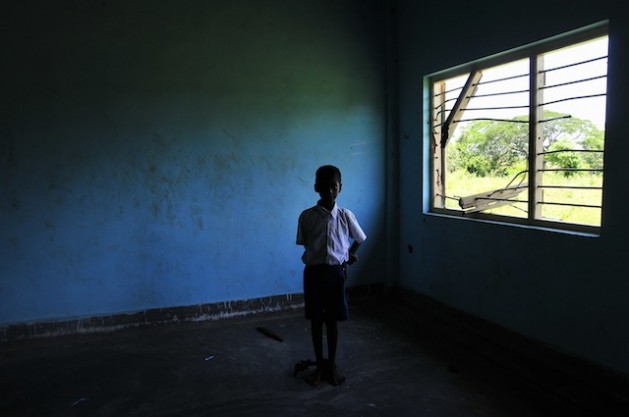 COLOMBO, Oct 5 2012 (IPS) - In 2011, 1,463 cases of sexual exploitation of children were reported to the Sri Lankan Police, who found every single complaint to be genuine and opened investigations.

By the year’s end, not one case had proceeded to the High Courts, where, according to the country’s judicial system, grave sexual crimes against children are heard.

Judging by this pattern, and similar cases in the past, the wait for justice is likely to be a long one.

In August this year 4,000 cases of child abuse were being heard in the country’s 34 High Courts, the United Nations Children’s Fund (UNICEF) said.

“One third of cases pending in the High Courts are in fact related to children,” according to a UNICEF report.

Child rights activists say that the real figure of cases pending resolution could be higher, if those that are yet to reach the High Court level are accounted for.

When a child abuse case is first reported, police begin by carrying out preliminary investigations and a Magistrate Court decides whether or not to send the cases to High Courts or dismiss the charges.

“If you count all those cases that are still awaiting a conclusion to the investigation, we are talking about a figure as high as 8,000,” Visakha Tillekeratne, an advocate for the local rights group, Justice for Victims, told IPS.

On average, a child abuse case takes as long as six years to reach a conclusion, according to UNICEF officials.

“A 2010 study of 110 cases of child abuse that came to the Forensic Medical Department of the University of Kelaniya for judicial medical examination mentioned that the average time taken to give evidence was 62.5 months (five years) from the day of the examination,” Suzanne Davey, UNICEF spokesperson in Colombo, told IPS.

The delays are not specific to child abuses cases, but plague the whole legal system, which is crippled by a lack of trained personnel in police stations capable of carrying out investigations, as well as a dearth of personnel at the Attorney General (AG)’s Department to handle prosecutions relating to child abuse cases.

“It is a big issue,” Senior Superintendant of Police and Police Spokesperson, Ajitha Rohana, told IPS, referring to the fact that at the end of 2010, 650,000 unresolved cases were being heard in the island’s courts.

Now, “Efforts are being made to give special attention to child abuse cases,” Rohana said.

UNICEF has collaborated with the Justice Ministry, Police Department and the AG’s Department to train judicial officers, police investigators and others in an effort to expedite investigations and child abuse cases.

Over 900 officers have received training since this January and a pilot project is underway in six districts where child abuse cases are treated with priority. Rohana told IPS that the initial results of the pilot projects were positive.

“The plan is to introduce the scheme to all the districts,” Rohana said.

Experts believe this needs to happen sooner rather than later, since the long wait for justice could add to the victims’ trauma.

“It is a brutal wait, especially when year after year nothing gets done,” Tillekeratne said.

“Case delays lead to the further victimisation of those children who have already suffered too much because of abuse and exploitation,” added Caroline Bakker, Chief of Protection at UNICEF, Sri Lanka.

She said that when victims see the offenders out on bail, it heightens their sense of helplessness. “Offenders remain free and continue to commit crimes against children with impunity,” she said.

Rohana told IPS that police are now taking special care not to allow suspects of child abuse to roam free unless granted bail by the court.

“All officers in charge of police stations have been instructed to take immediate action when a child abuse case is referred to them,” he said.

But Tillekeratne told IPS that much more concerted action was needed at the national level, given the enormity of the problem. “What we need is not for the pilot project to be phased into the rest of island, what we need is immediate implementation of the plan without delays.”

Rohana told IPS that, since 2005, when the government inducted special officers dedicated to women and children’s protection into police stations around the country, reporting has increased.

But UNICEF’s Davey said it was difficult to know if the presence of these officers had led to an increase in reporting or simply been accompanied by a rise in the levels of abuse.

The three worst provinces for child abuse in Sri Lanka are currently the densely populated Western Province and the two rural agricultural provinces, Sabaragamuwa and North Central. Police statistics show that most of the abuse in rural areas took place due to children being left unattended for long periods of time.

A recent spate of high-profile abuse cases involving local politicians, and another of a six-year-old girl being raped and murdered by her 16-year-old relative, have once again increased press coverage of the issue.