Reducing Poverty in South Africa by Cutting Time in Traffic 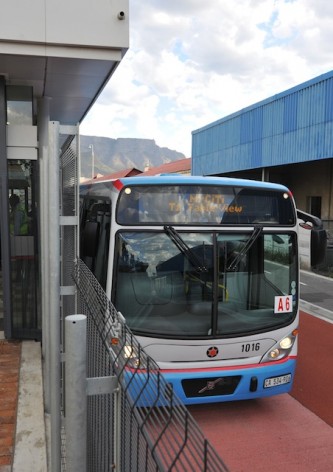 CAPE TOWN, South Africa, Oct 2 2012 (IPS) - In South Africa, Bus Rapid Transit systems, which were pioneered to great effect in Latin American countries such as Colombia and Brazil, are being promoted as potentially effective ways of delivering improved public transport services to the urban poor. But experts question whether systems such as these can alleviate poverty to any meaningful extent.

Bus Rapid Transit, sometimes referred to as “rail on road” systems, are high-quality, high-capacity bus systems with their own right-of-way, dedicated bus lanes.

Today the TransMilenio in Bogota, Colombia carries around 1.6 million passengers every day, over 84 kilometres of segregated busway. In Curitiba, Brazil, about 70 percent of commuters use the BRT, and around 30 percent of passengers are “converted” private car users.

It is upon purportedly transformative systems such as these that the cities of Johannesburg, Tshwane and Cape Town in South Africa, Lagos in Nigeria and Nairobi in Kenya have pinned their transport hopes and dreams.

Early phases of multi-million dollar capital projects are operating in Johannesburg and Cape Town, and are set to soon launch in at least four other cities in South Africa.

But while it is too early to draw long-term conclusions about the impact of these transport systems, a number of researchers are asking questions and coming up with some answers about their ability to contribute to national goals of alleviating poverty.

James Chakwizira, a senior researcher in the built infrastructure department at the Council for Scientific and Industrial Research (CSIR), told IPS that although these high-quality services do have great potential for addressing public transport challenges within communities, the current initiatives such as Johannesburg’s three-year-old system, Rea Vaya, fall short of expectations.

He said because terminal infrastructure developments are located away from the marginal communities’ location, people from these areas need to use a minimum of two transport modes in order to access and use the routes.

Councilor Rehana Moosajee, who is on the Mayoral Committee Member for Transport for the City of Johannesburg, and is a Rea Vaya champion, told IPS that initially one of the key imperatives of the Rea Vaya system was to overcome apartheid’s spatial legacy and promote access and social cohesion.

“I think that now a lot more work will have to be done over a period of time in assessing impacts on poverty, as based on the city’s own multiple deprivation indices, the areas of highest multiple deprivation are further south of Soweto – a township to the south of Johannesburg – and therefore not yet reached by the service.

“Our own experience suggests that Rea Vaya commuters are certainly saving time, though, and we have also had some interesting accounts of property availability and take-up on certain parts of routes and the creation of economic activity,” she said.

At a December 2011 conference on Land Passenger Transport, Karen Lucas, an international researcher on transportation equity, supported the implementation of BRT to the extent that “these major infrastructure projects are needed to bring high quality, modern and efficient mainstream public transport services to inner cities.”

However, she noted “these services will serve only a minority of the travel needs of urban populations.”

Research released in July by the University of Pretoria’s Christo Venter and Eunice Vaz reached a similar conclusion. Using data from a small-sample household survey conducted in Soweto, they found that the time and cost benefits of the system “accrue largely to medium-income households rather than to the poorest commuters in the area.”

“To the extent that passengers can spend time and fare savings on other goods, Rea Vaya contributes to poverty reduction,” they found. The researchers also noted that Rea Vaya is priced higher than the cheapest available public transport alternative, commuter rail, which remains the mode of choice for the poorest commuters.

The average travel cost for Rea Vaya users comes to R10.20 (about 1.24 dollars) per one-way trip to work, as compared to R11.70 (about 1.42 dollars) for other modes of transport like mini-bus taxis, which most people used to take before Rea Vaya.

Overall, the direct benefits of Rea Vaya are skewed in favour of middle- rather than lower-income residents, the researchers concluded. They suggested that more specific targeting was needed for the BRT to deliver significant poverty reduction benefits.

The situation is similar with the City of Cape Town’s MyCiTi early phase BRT service.
African Centre of Excellence for Studies in Public and Non-motorised Transport (ACET) researchers Lorita Maunganidze and Romano Del Mistro used ACET Household Survey data to conclude that MyCiTi might not be of value to poor commuters.

“While poor commuters may benefit from more accessible, frequent and fast BRT services, ironically, these will be more expensive and in some cases unaffordable to them and therefore of no benefit,” the researchers said.

They recommend that the routing structure be revised and rationalised to make in-vehicle and trip distances shorter, particularly for the poor commuters who face the longest commuting distances and times; and that local BRT be tailored more specifically to work within the South African environment or under South African conditions.

Councilor Brett Herron, City of Cape Town’s Mayoral Committee Member for Transport, Roads and Stormwater, told IPS that it is not possible to look at the impact of a new BRT service on poverty, or on poor communities, in isolation from the entire public transport network.

“BRT is just one mode of transport and this mode alone cannot have expansive direct economic benefits to poor communities … BRT trunks alone are not going to bring about the level of change we require in order to universally benefit the urban poor.

“We will seriously address poverty only when we piece together all the complicated components of this puzzle; public transport is one piece – with changed land use, densification, transit-orientated development, all responding to new or improved public transport corridors, we will start to bring people to opportunities and take opportunities to people.”

Pauline Froschauer, project manager for Rustenburg Rapid Transport, which is currently in the construction phase, told IPS that instead of poverty alleviation, a transport project such as a BRT should be measured against what is usually its primary objective: the effect it has on levels of mobility and accessibility.

“At best one could say that by improving mobility and accessibility, there are positive ‘externalities’, such as city development, local economic development and poverty alleviation. But to try to measure this in one BRT corridor (such as the Soweto-CBD Rea Vaya) is, I think, misrepresentative. Until one has a reasonable network effect, improved mobility and accessibility will not be achieved.”