DAKAR, Oct 18 2012 (IPS) - Over the past two years, millet production has reached record levels in Dya, a rural community in the Kaolack region of central Senegal, where the Agricultural Value Chains Support Project (PAFA) is supporting two farmers’ collectives.

PAFA is a six-year initiative launched in 2010 in four regions of Senegal’s groundnut growing basin: Diourbel, Fatick, Kaffrine and Kaolack. It’s a joint project of the International Fund for Agricultural Development (IFAD), the Organisation of the Petroleum Exporting Countries’ Fund for International Development and the Senegalese government. 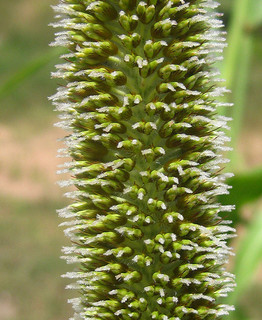 “The 7,650 producers who have been trained in this region are women, young heads of households, people with disabilities, small producers unable to guarantee their own food security – in short, the most economically vulnerable. They’ve been chosen by a committee headed by the governor of their region,” PAFA coordinator Sémou Diouf told IPS.

In Dya, 200 people have been selected and organised into two cooperatives, which between them grow millet on 400 hectares.

The producers each make a contribution of between 44 and 64 dollars to the collective, which entitles them to 200 kilos of fertiliser and various items of agricultural equipment. Each group is supported by two technical advisors trained in crop monitoring.

“In 2011, we expected to harvest 800 kilos per hectare. We found ourselves with an average yield of 1.2 tonnes per hectare. We have never harvested so much millet,” Ndiaye told IPS. “This year, our estimate of one tonne per hectare has also been exceeded. So we’ve signed an agreement with a distributor, to sell him 60 tonnes of millet when the crop comes in.”

Harvesting this year’s millet will begin at any moment, and Aïssatou Ndiaye, from the Bock Mbotay collective, says Dya has achieved self-sufficiency in food. “Despite planting my seedlings late in 2011, I had a record harvest. In fact, my family is still eating last year’s grain,” he told IPS.

The treasurer of the Bock Mbotay group, Cheikh Ndiaye, said the group’s combined output was expected to rise from 160 tonnes in 2011 to 200 tonnes this year, because this year’s seedlings are better.

“Just two years ago, we were facing hardship, because the harvests were insufficient,” he noted. This year, the collective has a contract to supply 60 tonnes of millet to a distributor.

Omar Guèye, a member of the Manko collective, is also happy. “Our yields have never been so good. It’s thanks to this project,” he commented to IPS.

But, he added, “There’ve been some problems with training because the trainers have been hard to get hold of and the fertiliser was sent to us a bit late.”

Besides helping with production and marketing, PAFA is also helping producers set up grain stores for millet, which is the staple food in this part of Senegal.

“This is a project which is contributing to food security and raising income for the most vulnerable people in rural areas. We’re seeing excellent results. At Dya, the beneficiaries have not only achieved food security, they’re selling a healthy surplus,” said Samba Gaye, PAFA’s liaison at the National Agency for Rural and Agricultural Advice.

Gaye told IPS that a total of 2,020 hectares of millet and 600 hectares of sesame were planted by project beneficiaries in Kaolack and Kaffrine, with production of millet amounting to 1,880 tonnes, and the sesame harvest coming to 250 tonnes.

“We have high hopes for 2012, because the season has gone well and the fields look great,” he said.

Madieng Seck, an agriculture journalist, believes this project can allow farmers to “fly with their own wings”.

“The best thing this project can do for producers is to ensure they get good technical training so that they can sustain themselves,” Seck, director of the private monthly journal Agri-Infos, told IPS.

Ndiaye admits that it will not be easy to manage on their own, but sounds a confident note. “We have truly learned a lot from the project’s trainers, and we are ready to take over when PAFA ends.”