The Brasilia Consensus, a Model for Latin America 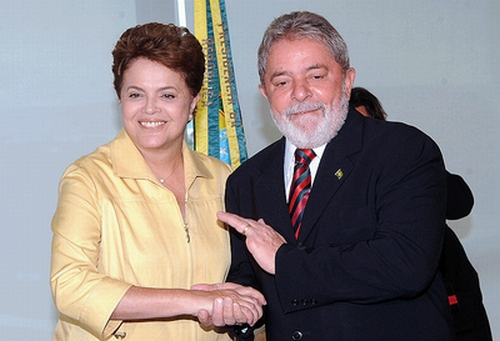 CARACAS, Oct 7 2012 (IPS) - Following the extreme neoliberalism of the Washington Consensus, which gave rise to a lost decade in social terms, Latin America is experimenting more successfully with a home-grown formula: the Brasilia Consensus, which combines the market economy and social inclusion.

Michael Shifter, president of the Washington-based Inter-American Dialogue think tank, coined the term “Brasilia Consensus” in contrast with the Washington Consensus. It is also called “Lulaism” after former Brazilian president Luiz Inácio Lula da Silva, or “the Brazilian model.” And it has a growing following in Latin America among governments of both left and right.

“The Brazilian model has had a very positive impact as an example of how things can be done differently, by promoting growth without relinquishing social equity,” José Rivera, the permanent secretary of the Latin American and Caribbean Economic System (SELA), told IPS.

He said Latin America and the Caribbean “should share the regional aspiration of integration and be united in the common goal of reducing asymmetries and making progress in repaying major outstanding social debts.”

Rivera said there were “positive examples, especially home-grown ones, of governments that deal efficiently with the unpaid social debts in the region, where one out of three Latin Americans live in poverty and nearly 90 million people survive on less than a dollar a day.”

In an interview with IPS, Shifter said the features of the Brasilia Consensus “remain intact and valid,” although Lula left office in January 2011 and the international and regional contexts have worsened.

“The model has not changed, with its three central concepts: economic growth, social equity and democratic governance,” he said.

Its validity is confirmed by its spread as a governance guide for many countries in the region, whatever the political ideology of their presidents. This contrasts with the decline of other, more radical, proposals led by Venezuelan President Hugo Chávez in the first decade of this century.

The Brazilian model takes the opposing view to the package of measures imposed by Washington-based international financial institutions and power brokers on Latin America during the foreign debt crisis that broke out in the early 1980s, and during the 1990s.

The 10-point Washington Consensus, summarising neoliberal ideology, enforced harsh adjustments to eliminate the fiscal deficit, including the redirection of spending, financial and monetary liberalisation, tax hikes, opening of markets and investments, and massive privatisation, in order to repay debt and establish a new basis for economic growth.

In practice, far from generating growth, the reforms fuelled regional deindustrialisation and caused GDP to fall for nearly a decade, marked by financial crises, several of which were of global scope.

But the worst aspect was its impact on people. During the so-called lost decade, all forms of social spending were cut, especially in education, health, housing and aid for the most vulnerable sectors, while labour conditions also worsened.

As a result, poverty and extreme poverty increased, shanty towns grew in the cities, and the informal economy and informal labour expanded, among other negative impacts.

During his eight years in power (2003-2011) Lula established a different model, based on macroeconomic and fiscal stability, an autonomous monetary authority and free exchange rates, added to aggressive industrial and domestic production policies.

Another priority of the Brazilian model is social inclusion, with wage raises, formal job creation and high spending on policies to eradicate hunger, reduce poverty, improve education and health and redistribute income across society.

The guiding principle is democracy, along with the extension of human rights, incentives for citizen participation and organisation from the grassroots up.

Shifter said Lula’s successor, President Dilma Rousseff, “decided to keep a lower global profile than Lula, but the Brasilia Consensus model has not been affected.” She has “a different leadership style and other priorities,” he said.

Rousseff has implemented different policies to stimulate the economy and cushion the effect of the economic recession in the countries of the industrialised North, especially Europe. She has also taken care to reinforce social programmes in this unfavourable new scenario.

A recent statement by Rousseff underscores her position. “What I want, and what I fight for, is for Brazil to become the sixth social power,” she said, now that her country has become the sixth largest economy in the world and is heading for fifth position.

Among the Latin American countries whose governments take the Brasilia Consensus as their guide, with variations, Shifter mentioned Chile, Colombia, El Salvador and Uruguay. Other administrations adopt certain elements, while he described Argentina and Paraguay – until its president Fernando Lugo was ousted in June – as “hybrids” between Lulaism and Chavism.

He also found it remarkable that Henrique Capriles, the opposition candidate in Venezuela’s elections on Sunday Oct. 7, “stressed that Lula was his model, which his platform confirmed.”