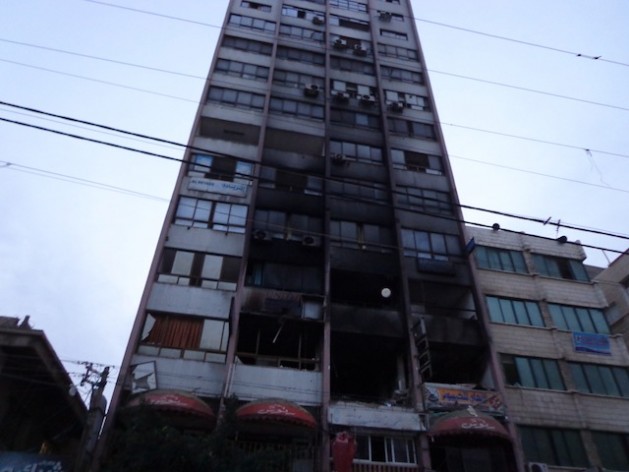 GAZA CITY, Nov 23 2012 (IPS) - The ceasefire has brought extremities in Gaza. In the morning the coastal territory woke up bashed and bloody from one of Israel’s most intensive nights of bombardment since a week’s tit for tat violence broke out between Hamas and Israel. By late morning the coastal strip was ghostly quiet, gripped with fear as people stayed indoors awaiting the inevitable retaliation from Israel for a bus bombing carried out in Tel Aviv by Palestinian extremists. But as night fell thousands of Gazans took to the streets in joyful celebration in what they see as victory over Israel.

Earlier on Wednesday dull thuds and repetitive booms could be heard along the Rafah border between Egypt’s Sinai and Gaza. IPS witnessed a fleet of Egyptian ambulances rushing into Gaza to ferry Palestinian wounded back to Egypt.

Nervous Palestinian border guards forced a group of incoming journalists to sign an indemnity form for their own safety following a series of attacks by the Israelis on several media buildings and vehicles, which left several journalists dead and more wounded.

The sun was setting and within hours the Gaza strip would be dark, a hazardous time when most of Israel’s attacks take place. Through the half hour drive from the south of the strip to the north, approximately 27km, Israeli naval vessels stationed off Gaza were continually shelling the territory while fighter jets bombed from above.

It was too dangerous to take the coastal road as it was in clear sight of the naval frigates. The other main road to Gaza city passed a number of refugee camps. Nusseirat and Brej camps were bombed shortly before this IPS correspondent passed them by. Rising plumes of black smoke were visible.

Only a few other cars risked travelling along the road. Gaza’s 1.7 million inhabitants were nowhere to be seen, and shops and businesses were closed. Police posts were empty, and apart from small groups of young men assembling on street corners, the coastal enclave was deserted.

The atmosphere of uncertainty and fear was palpable as the taxi stopped periodically to allow journalists to take photos of bombed buildings, including police stations, government institutions and ordinary homes.

“We don’t expect to sleep tonight. We are waiting strong retaliation for the bus bombing,” Ihab Afifi, a ministry of interior employee told IPS. But the bloody revenge did not come, following a ceasefire between Hamas and Israel brokered by the Egyptians and the Americans.

As news of the Hudna or ceasefire spread, overjoyed Gazans took to the streets to celebrate. Women ululated, children waved flags and young men handed out sweets and punctured the night air with celebratory gunfire. Tooting cars weaved between thousands of marching Gazans.

There was a sense of achievement and unity, with flags from all political parties, including Fatah and Hamas lending colour to the celebrations.

“This is unlike the ending of the last war with Israel from December 2008 to January 2009. Nobody celebrated then. This time Israel called the ceasefire and they will not be able to dictate terms to us like before. We have proven that we can exact a price both militarily and politically from the Israelis. Our rockets reached all the way to Tel Aviv. The Israelis too know what is feels like to be afraid,” Muhammad Abu Qeef celebrating on the street told IPS.

For the first time in days Palestinian fighters armed and in uniform came out of hiding. They had gone underground as Israel hunted down targets associated with Gaza’s Hamas rulers.

The feeling of no longer being under Israel’s boot has significantly contributed to Palestinians’ new found confidence, however tentative, following what they see as victory in the latest conflict. Many Israelis are furious with their leadership and what they see as Prime Minister Benjamin Netanyahu’s capitulation to Hamas.

Israelis believe the ceasefire came too soon and that the job of dealing with Hamas was left unfinished. Israelis took to the streets in Sderot, a southern Israeli town which bore the brunt of rocket attacks from Gaza, protesting against Netanyahu.

However, some analysts have urged caution, concluding that the conditions of the current ceasefire are not too different from the previous ceasefire which ended Israel’s Operation Cast Lead in 2008/2009. Other political commentators are of the view that it is only a matter of time before this current truce is once again broken.

However, what is undisputed is that Israel not only failed to break Hamas, but left the organisation politically stronger, still in possession of significant arms caches, and with growing regional support. (END)