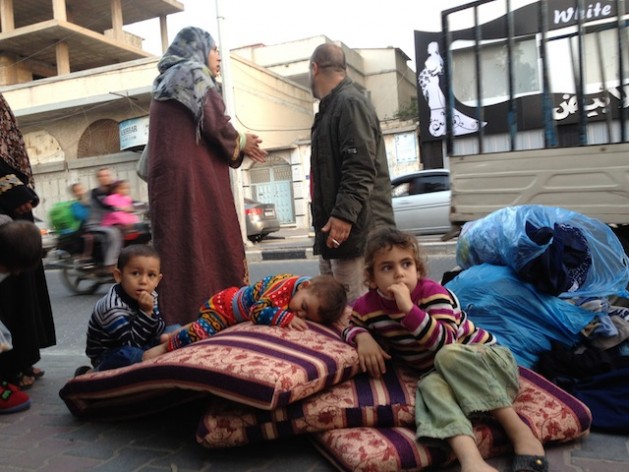 CAIRO, Nov 23 2012 (IPS) - The reaction of post-revolution Egypt to Israel’s weeklong onslaught on the next-door Gaza Strip – brought to a halt temporarily at least by a Wednesday night ceasefire – has contrasted sharply with the former regime’s callous approach to the besieged coastal enclave.

“The Mubarak regime unashamedly participated in Israel’s siege of the Gaza Strip, never missing an opportunity to pressure Hamas,” Tarek Fahmi, Israel affairs expert at the Cairo-based National Centre for Middle East Studies told IPS. “Egypt’s new leadership, by contrast, has expressed its unconditional support for Hamas and the people of Gaza, and actively tried to lift the siege.”

President Mohamed Mursi became Egypt’s first freely elected head of state this summer, some 16 months after the ouster of longstanding president Hosni Mubarak. Mursi hails from Egypt’s Muslim Brotherhood, of which the Palestinian resistance faction Hamas – which has governed the Gaza Strip since 2007 – is an ideological offshoot.

Unlike his predecessor, and most Western leaders, Egypt’s new president was quick to denounce the latest round of Israeli bloodletting. In his weekly Friday sermon on Nov. 16, Mursi vowed that Egypt would not leave the Gaza Strip “on its own” to face Israel’s “shameless aggression.”

In a clear reference to post-revolution foreign policy changes, he went on to assert: “Egypt today is very different than the Egypt of yesterday.”

The latest violence was triggered by Israel’s assassination on Nov. 14 of a top Hamas commander, to which Gaza-based resistance groups responded by firing salvoes of rockets. The subsequent week of unremitting Israeli bombardments – from air, land and sea – left more than 150 Palestinians dead, the vast majority civilians, and hundreds more seriously injured.

In the same period, five Israelis were killed by rocket fire from Gaza. Several more were reported injured.

Following announcement of the ceasefire, Hamas political chief Khaled Meshaal expressed gratitude to Mursi for Egypt’s role in mediating an end to the violence. He also thanked the Egyptian president for the latter’s “decisions and approach to Israel’s latest aggression on Gaza.”

Since the crisis first began, Egypt’s reaction has not been confined to strongly worded statements.

On the first day of the onslaught, Cairo announced the withdrawal of its ambassador to Israel, while Mursi called on the UN Security Council and the Cairo-based Arab League to hold emergency meetings. Two days later, Egyptian Prime Minister Hisham Qandil paid a brief visit to the beleaguered territory in a show of solidarity.

Egypt also opened the Rafah border crossing, the strip’s only link to the outside world (since its 2005 ‘unilateral withdrawal’ from the territory, Israel has kept its border with the strip hermetically sealed). Passengers and cargo, including desperately needed medical supplies, are now flowing from Egypt into the strip, while injured Palestinians are being brought into Egypt for medical treatment.

According to Fahmi, the reaction of Egypt’s new Islamist leadership to the latest crisis in Gaza corresponds to Mursi’s – and by extension the Muslim Brotherhood’s – stated positions on the perennial Arab-Israel conflict.

“Mursi’s reaction is in line with his campaign platform and his post-election statements on the issue,” Fahmi explained, “in which he said that Egypt under his leadership would directly support the Palestinian people against Israel’s continued occupation of Palestine and work to secure Palestinian national aspirations.”

The Egyptian response to the current crisis contrasted starkly with the Mubarak regime’s reaction to Israel’s 2008/09 ‘Cast Lead’ offensive. Over the course of that three-week-long onslaught almost four years ago, in which Israel used internationally banned weapons, some 1,500 Palestinians – mostly civilians – were killed and thousands more injured.

Despite the ferocity of the Cast Lead assault, Mubarak’s Egypt had kept the Rafah border crossing tightly sealed. Not even Palestinians suffering life-threatening injuries had been allowed into Egypt for medical treatment.

“At the behest of the U.S. and Israel, Mubarak completed the Zionist blockade of the strip – even at the height of the Cast Lead massacre – in hopes of destroying Hamas,” Magdi Hussein, political analyst and former head of Egypt’s Islamist-leaning Labour Party told IPS.

“Mursi, by contrast, openly supports the resistance in Gaza and began taking steps to open the border even before the latest aggression,” added Hussein, who was jailed for two years under Mubarak for crossing into the strip without permission during Israel’s 2008/09 assault.

Notably, Mursi has also shifted Egyptian support from the Palestinian Fatah movement, which leads the West Bank-based Palestinian Authority, to Hamas in Gaza.

“Egypt now supports Hamas, to which the Brotherhood is affiliated ideologically and which espouses a strategy of armed resistance,” said Fahmi. “The Mubarak regime had supported Hamas’s bitter rival Fatah, which had insisted on holding fruitless ‘peace talks’ with Israel that utterly failed to improve the Palestinians’ position.”

Egyptian support for the people of Gaza – and the resistance based there – has hardly been confined to official circles.

On Sunday, a convoy including hundreds of Egyptian activists of all political stripes briefly visited the strip to express solidarity with their beleaguered Palestinian brethren. Two days earlier, pro-Gaza rallies held across Egypt drew tens of thousands, while Egyptian political groups from across the spectrum are calling for an even bigger mass protest this Friday.

But while Egypt’s Gaza policy has changed fundamentally since last year’s revolution, that of the international community has apparently not. As was the case during Israel’s Cast Lead assault four years ago, the UN Security Council failed to issue a resolution calling for an end to hostilities.

On Tuesday (Nov. 20), one day before the ceasefire announcement, the U.S. blocked a UN Security Council statement condemning the escalating violence.

“Some European capitals appear more sympathetic to Hamas and Gaza this time around,” said Fahmi. “Washington’s support for Israel, however, as during Cast Lead, appears to be total.” (END)