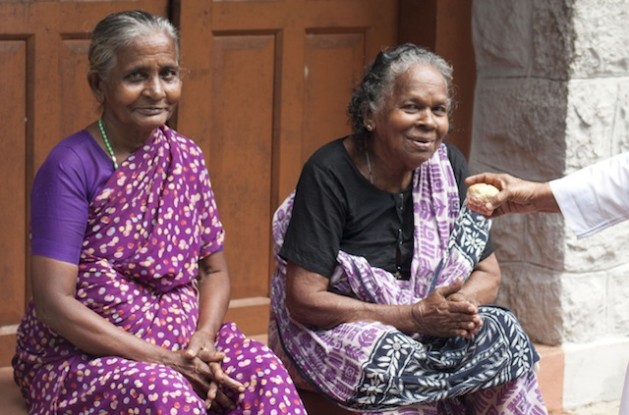 NEW/DELHI/THIRUVANANTHAPURAM, Nov 9 2012 (IPS) - At midnight on Oct. 12, 91-year-old George Puthenveettil, a widower living in Kalanjur village in the Pathanamthita district of the southern Indian state of Kerala, was brutally tortured and ousted from his own house by his only son for “not earning any money”.

The nonagenarian wandered the streets of his village for hours before he reached a shelter in Pathanapuram with the help of neighbours. Police said the son had often beaten and harassed the old man, who was financially dependent on his son.

For many people like George, the sunset years of life turn out to be a traumatic period, in which they find themselves entirely dependent on families or friends due to the absence of a good social security system or government pension plan in India.

Expressing concern over the increasing insecurity of elders in the country, Dr. Irudaya Rajan, a prominent demographer and chair professor of the research unit on international migration under the Ministry of Indian Overseas Affairs, told IPS that income security is one of the most urgent needs of India’s aging population.

Years ago, “traditional values and religious beliefs were quite supportive of elderly people”, he said.

Today, economic hardships and the faltering nuclear family system are “drastically eroding the support base of aged people”.

“The majority of the elderly tend to work even after the age of retirement due to inadequate social security and financial resources,” Rajan added.

A report on the aging population in India, released by the United Nations Population Fund (UNFP) in New Delhi, said that the country had 90 million elderly people in 2011, with the number expected to grow to 173 million by 2026.

Of the 90 million seniors, 30 million are living alone, and 90 percent work for a living.

Experts estimate that only eight percent of the labour force of about 460 million receives social security from an employer.

‘Informal’ labourers left out in the cold

Over 94 percent of India’s working population is part of the unorganised sector, which refers to all unlicensed, self-employed or unregistered economic activity such as owner-manned general stores, handicrafts and handloom workers, rural traders and farmers, among many others.

Gopal Krishnan, an economist in Chennai, told IPS “There is no social safety coverage for people in the unorganised sector, which accounts for half of the GDP (gross domestic product) of India”.

In 2006, the National Commission for Enterprises in the Unorganised Sector recommended that the Union Government establish a National Social Security Scheme to provide the minimum level of benefits to workers retiring from the informal sector.

Until now, the government has not been able to compile a comprehensive policy to address the issues of elderly people. The ministry of social justice and empowerment drafted a National Policy on Older Persons in 1999, which was never implemented.

Dr. Udaya Shankar Mishra, a senior demographer at the Centre for Development Studies in Thiruvananthapuram, believes the current “profile” of the aging population of India can change.

“The (perception) of the elderly as a burden can, with suitable policies, be turned into an opportunity to realise active and healthy aging,” he told IPS.

“With limited resources, we need to adopt viable policy changes to manage the crisis of the aged. This calls for a detailed auditing of (all) the affairs of the elderly, primarily health, morbidity and mortality in addition to economic and emotional wellbeing.

“Research on geriatric health needs to (shift) towards ensuring a better quality of life among future elderly persons. Considering the demographic inversion and its associated challenges, it (is clear) that investments into healthy aging are necessary,” he added.

Data from the 2011 National Census revealed that the percentage of aged living alone or with spouse is as high as 45 percent in Tamil Nadu, Goa, Himachal Pradesh, Maharashtra, Punjab and Kerala.

The National Sample Survey Organisation calculates that one out of two elderly people in India suffers from at least one chronic disease, which requires lifelong medication.

The most recent data available, taken for the period 1995-96, revealed that 75 percent of aged individuals are affected by at least one disability relating to sight, hearing, speech, walking, and senility.

Dr. Shanti Johnson, professor at the faculty of Kinesiology and Health Studies at the Canada-based University of Regina, estimates that nearly eight percent of the elderly are immobile, while a disproportionately higher percentage of women are immobile compared to men.

“The average hospitalisation rate in the country per 100,000 aged persons is 7,633. There is considerable gender difference in the rate of hospitalisation, as a much greater proportion of men are hospitalised compared to their female counterparts,” she added.

Non-governmental organisations are advocating for more old-age homes, day-care centers, physiotherapy clinics and temporary shelters for the rehabilitation of older persons, with government funds allocated to the running and maintaining of such projects.