Teach a Woman to Farm…And She Creates Jobs 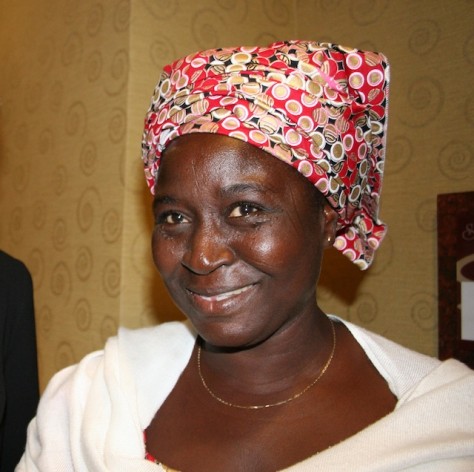 Smallholder farmer Susan Godwin employs three women to help her process the peanuts she grows and was named by Oxfam International as the 2012 Female Food Hero in Nigeria. Credit: Busani Bafana/IPS

DES MOINES, Iowa, USA, Nov 16 2012 (IPS) - Give a woman a hand-out and you feed her for a day. But teach her to farm, and how to add value to her product, and you feed her and her family for a lifetime. And if she happens to be Nigerian smallholder farmer Susan Godwin, she in turn will also provide jobs for her community and become a national food hero.

Instead of turning to financial hand-outs when her crop failed four years ago, Godwin went back to the classroom to learn new farming methods, how to add value to her product and how to draw up a business plan to access credit.

“Some of the women I trained with gave up after realising that the training had no financial hand-outs, but I wanted to see it to the end,” Godwin told IPS.

The following harvest, Godwin’s yam and groundnut yield doubled. From the sales she bought a peanut shelling machine and began processing them into oil and groundnut cake, something a few people in her community have done.

Today, her family is food and financially secure. Not many smallholder farmers in her village of Tunduadabu in Nasarawa State in central Nigeria can make that claim. While Godwin employs three women to help her process the peanuts she grows, many farmers in the village are struggling. This is because, unlike Godwin, they have not been educated about adopting new farming methods and still rely on traditional techniques.

“Training is very important for smallholder farmers, especially in Nigeria, because without the training they would not know about new farming methods. Adopting new methods has helped lift me out of poverty to a new life where I have enough to eat, to give to people around me and to sell. I am now able to send my children to school,” the mother of five said.

Godwin now has five shelling machines and employs three women to operate them. She also lets her community use the machines for a small fee. “From the daily takings from the shelling machines I give each woman half of what she makes that day; 200 Naira (1.27 dollars) makes a difference when you have nothing,” said Godwin, who is also the chairwoman of the United Movement for Small Scale Farmers.

By sharing the profits of her business, Godwin has empowered her employees. Some of them have now been able to start up their own businesses.

“Smallholder farmers can feed the world if we give them the tools and support them,” she said

A continent away from her village, Godwin was recently feted as a farming role model at the 2012 Borlaug Dialogue held in the Midwestern U.S. state of Iowa in October. Godwin was also named by Oxfam International as the 2012 Female Food Hero in Nigeria.

“With the right support, smallholder women farmers can identify their needs, package relevant messages and effectively communicate them to policymakers,” Mwamakamba told IPS.

“There is a need to establish local-level dialogue platforms that capture the voice of women farmers in the process of policy formulation and implementation. Furthermore, there is a need for specially-designed extension and training services targeting smallholder women farmers in order to improve their productivity.”

Mwamakamba emphasised that these programmes must be complemented with improved access to inputs and markets if they are to have a lasting impact on farmers’ livelihoods.

Director of global public policy at CropLife International, Tracy Gerstle, told IPS that women were the backbone of the rural economy, comprising 43 percent of the agricultural labour force in developing countries and an estimated two-thirds of the world’s 600 million poor livestock keepers.

“We cannot overlook the central role of women in global food security and economic growth,” she said.

“Within poor households, women are essential to breaking the cycle of poverty, given that women tend to invest a significantly higher portion of their income on food and education for the family. Yet women struggle to reach their potential, given globally persistent gaps in their access to extension (services), agricultural inputs, land and finance vis-à-vis men. (This is) underpinned by persistent inequalities in their basic human rights in terms of access to education, land and equality.”

Gerstle said that providing educational support for girls and women through training facilities, scholarships, mentoring, extension services and other forms of technical assistance would help bridge the equality gap.

Happy Shongwe is leading the fight against food insecurity in her homeland, Swaziland. Shongwe, a commercial seed grower and winner of the FANRPAN 2011 Movers and Shakers Civil Society Award, agreed that smallholder farmers hold the keys to food security.

“Smallholder farmers can feed the world, if you capacitate them and give them all the tools,” Shongwe told IPS in a telephone interview from the southern African nation.

Shongwe grows certified legume and maize seeds under conservation agriculture techniques on her farm on the Lubombo plateau in the Siteki region, 150 kilometres east of the capital, Mbabane.

After noticing that farmers were constantly short of seed, Shongwe ventured into the competitive, yet lucrative, market of seed production.

“Financial support is important for smallholder farmers. I have the energy and the passion for farming, but not the money to kick-start some of my projects,” Shongwe, a mother of two, told IPS.

Her income has tripled since she started the business, which in a good season can bring in 2,500 dollars. Her success has even attracted the Swazi royal family, which has consulted her on growing legume seeds.

Shongwe is also passing on her wealth of knowledge to others.

“I am currently mentoring 60 farmers keen to go into seed production and have another group of 10 who I am training on conservation agriculture because knowledge and information is key if smallholder farmers are to contribute to food security,” said Shongwe.