RIO DE JANEIRO, Dec 14 2012 (IPS) - The cyclists riding in the bicycle lanes along the beachfront avenue of this Brazilian city pass the car drivers stuck in rush hour traffic.

The Rio de Janeiro city authorities are encouraging this simple, cheap and non-polluting solution for the growing problems of urban transport.

The sight of commuters on bicycles is increasingly common in Rio because of strong economic growth, easy credit and incentives designed to boost auto sales. 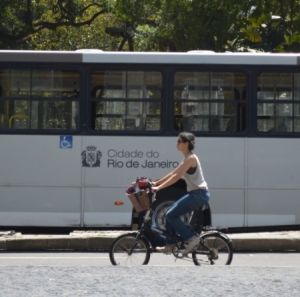 “I sold my car because it was so difficult to park, parking lots were expensive, I couldn’t cope with the traffic any more, and I was stressed out,” physical education teacher Teresa Moreira, who sold her car and now cycles to work, told IPS.

“When I drove to work I was under stress and I was rude. Now, on the bike, I’m not,” said Moreira, who commutes daily along the seafront drive between the neighbourhoods of Leme and Leblón, in the south of the city.

Traffic jams occur in any part of the city and at any time. They are worse when unanticipated events happen, such as an accident, the visit of a president or a rock star, a big international event, or simply Christmas shopping season.

“Originally the focus was on building cycle lanes for recreation, but now our priority is to find ways of fomenting bicycle use as a means of transport for short and medium distances, complementing the mass transport system,” María Lúcia Navarro, manager of the “Rio, Capital da Bicicleta” (Rio, the Bicycle Capital) programme of the city government’s environment secretariat, told IPS.

Rio de Janeiro, home to some 12 million people, is the second largest city in Brazil after São Paulo further to the south.

Special bicycle lanes began to be built in the late 1980s. Today they extend for nearly 300 kilometres, including lanes marked on roads and bicycle paths on sidewalks shared with pedestrians. These efforts put the city in first place in Brazil for kilometres of cycleways, and second in South America after Bogotá, Colombia.

Bicycles do not emit greenhouse gases that cause global warming, and they ensure fast journeys, are low cost, and provide health benefits “because pedalling is an aerobic exercise,” Navarro said.

If the cycle route network is integrated into high quality public transport, “its efficiency will spread throughout the city,” Zé Lobo, head of Transporte Ativo (Active Transport), an NGO that promotes alternative means of transport, told IPS.

The city government’s keen interest can be seen in the appointment of Carlos Roberto de Figueiredo, the city’s former secretary of conservation, to head the transport secretariat, said Clarisse Cunha Linke, deputy head of the Brazil office of the Institute for Transportation and Development Policy (ITDP), a New York-based NGO working for sustainable transport.

As a result of his appointment, she expects more policies to foment bicycle use.

Navarro said progress is being made compared to the last 20 years. Today, close to four percent of short and medium distance trips – approximately one million journeys a day – are made on bicycles. Bike users already outnumber train and boat passengers.

The 2009-2012 municipal plan emphasised the importance of sustainable urban mobility, and of maintaining and expanding the bicycle path system, integrating it into other forms of transport, and providing cycle storage shelters and bicycle rental sites.

“We’ll have to think about how to integrate the service sites and the bicycle storage units into the mass means of transport – the metro, trains, and fast bus lanes,” she said. “We have to start thinking about bicycles not only as a form of recreation but as a means of transport.”

Navarro discussed meeting this goal through plans for a bus rapid transit (BRT) system with cycle storage facilities at bus stops and with space on the buses for bicycles. The BRT buses are envisaged to spread into densely populated areas, like the west of the city.

ITDP is working with the city government, providing technical advice and evaluating, together with other organisations, a bicycle system for the centre of the city.

“Shops, for instance, still don’t see bicycles as something that could help them draw more customers. It’s important for the private sector to start to participate more,” said Linke.

She said more bike paths are needed, because most of them are concentrated along the coast. “If people can start and finish their journey on bicycle, the system will work better,” she said.

Moreira approves of some of the measures that have already been implemented, like being able to take bicycles on the metro at weekends. But “on weekdays the metro is already crowded. Imagine if everyone decided to take their bikes into the carriages.”

The private sector is contributing with 600 shared bicycles, rented mainly in tourist areas. Linke said this system should be further encouraged.

The new transport plan will put out to tender the supply of 200 cycle stands and 2,000 bicycles in less privileged and more remote zones.

“The total quality of the infrastructure should be attended to, and not just its extent,” Lobo said.

Solange Medeiros, a law student and sports cyclist, believes it is important to develop respect between cyclists and pedestrians.

“Sometimes pedestrians walk where they’re not supposed to on the cycle routes, creating problems and the risk of accidents,” she told IPS.

Moreira suggested that the authorities carry out traffic campaigns, especially for drivers of electric bicycles, who “move at 40 kilometres per hour, faster than is allowed, and knock over elderly people.”

As in all things, “what matters is respect,” she said.