Communities along the banks of a tributary of the São Francisco have adopted innovative measures to adapt to the diversion of the river’s course. 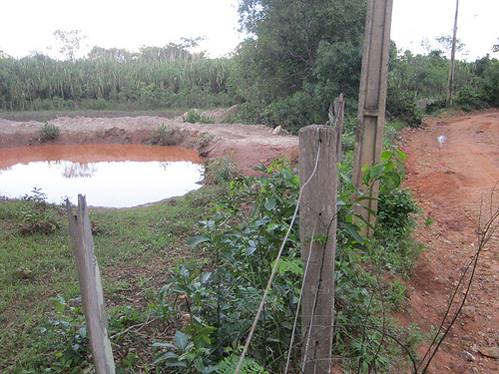 One of the small dams near the Dos Cochos River with water from a recent rainfall. Credit: Mario Osava/IPS

JANUÁRIA, Brazil, Dec 4 2012 (IPS) - José Geraldo Matos fondly recalls the massive traíras (Hoplias sp), carnivorous freshwater fish found in the lagoons and rivers of Brazil, that he used to catch in the Dos Cochos River just a few metres from his house.

That was three decades ago, before sedimentation and the loss of its sources turned the 38-kilometre-long river into an intermittent stream. Although returning the river to its original conditions may seem like an impossible task, concerted efforts have succeeded in recovering at least part of its former flow.

“Where I live, it only dried up for around three weeks this year. In the past it disappeared for four or five months,” reports Jaci Borges, a local resident and activist with Caritas, a Catholic organisation that supports this and many other solidarity-based development initiatives in the area.

Saving the Dos Cochos and other small rivers is key to revitalising the São Francisco River, the largest waterway in northeastern Brazil. Nine large and medium-sized hydroelectric dams on the São Francisco provide the region with electricity. The Dos Cochos, a sub-tributary, forms part of its watershed.

Of the 36 direct tributaries of the São Francisco, known as the “river of national integration” because it flows through the centre and northeast of Brazil, 16 were already intermittent in 2005, according to journalist Marco Antonio Coelho, the author of a book about the river’s evolution, “Os Descaminhos do São Francisco”.

The population living along the banks of the Dos Cochos – 300 families or around 1,500 people – began to react to the deterioration of their river in 2001. Preparations for taking action, which included the creation of the Dos Cochos River Sub-Watershed Association and discussion of what to do, lasted three years.

Beginning in 2004, they constructed 850 “barraginhas”, small circular dams near highways and other roads where the water from river flooding or heavy rains flows. This prevents sediment, which is abundant because of the sandy soil in the area, from being washed into the river and continuing to block it.

In addition, the land around these small dams becomes moist and feeds the water table in an area where rain is scarce and serious droughts are frequent, such as the one afflicting the semi-arid Brazilian northeast since last year.

The Dos Cochos River flows through the municipalities of Cônego Marinho and Januária, in the north of the state of Minas Gerais. Here the climate is similar to that in the rest of the interior of northeastern Brazil, where the average annual rainfall ranges from 250 to 750 millimetres.

In addition to the dams, work has been underway for the last three years to restore the forests along the river, by building a fence 30 metres from its banks to keep cattle out. Although not everyone has joined in this campaign, it is still impressive to see how the vegetation has naturally recovered in the areas that have been protected, without the need for planting new trees, Matos tells Tierramérica*.

The little river has become a model for successful revitalisation, earning press and television coverage in recent years.

The river’s deterioration was caused by deforestation of nearby hills and the replacement of native forests with eucalyptus plantations for charcoal production, stimulated by government policies since the 1970s. The river’s gradual death also dealt a heavy blow to local agricultural production.

“Many of its sources dried up, some of them blocked by sediment,” said Borges.

Minas Gerais is the Brazilian state with the greatest mining activity, which is in turn linked to railway transportation and the iron and steel industry, both major consumers of charcoal.

But extensive cattle grazing has also contributed to the river’s deterioration, due to the damage caused to the forest and soil along its banks, until the protective fence was installed. In addition, cattle ranching required the replacement of the natural vegetation with large stretches of pasture land, which is more prone to erosion and thus results in more sediment being washed into the river.

Matos, 57, and his five brothers share 200 hectares of land where they raise crops and cattle. Of his three sons, one has already moved to the nearby city, Januária, and “another of them wants to go, too,” he lamented.

“Living here is good, but surviving is difficult,” because rainfall is very irregular, and “after two months without rain, everything is lost,” he said.

Another difficulty facing local communities is the fact that the highways are unpaved and do not receive adequate maintenance, said Borges. This lack of attention from the municipal authorities not only affects transportation, but also the “barraginhas” constructed to save the river.

The most recent rains broke the poorly constructed dikes along a stretch of highway where they were installed roughly 50 metres apart to hold back the sudden rush of water. This led to a domino effect in which the barraginhas further downstream could not withstand the overflow of water that was not properly contained upstream, Borges explained.

The local watershed association plans to call on the municipal authorities to reform a 6.5-kilometre stretch of highway in order to test a model that could serve later for its entire length, he added.

The recovery of this small river through the efforts of the local communities themselves could serve as an example for the revitalisation of the São Francisco, a promise made by the federal government to compensate for the diversion of this major river – a major undertaking aimed at improving the water supply in four states in the northeast that will benefit 12 million people, according to the official plans.

But very little is being done, except for basic – and incomplete – clean-up efforts in a few cities, and nothing to reforest the banks of the river and its tributaries, according to Roberto Malvezzi of the Catholic Church’s Pastoral Land Commission.

Numerous studies estimate that the São Francisco has lost a third of its flow since the mid-20th century. Many of its tributaries and sub-tributaries dried up in Minas Gerais, where most of its branches originate.

Cattle ranching and monoculture plantations – of soybeans, coffee, rice and other grains, in addition to eucalyptus trees – provoke deforestation and are the main causes of this water disaster, by “breaking the hydrologic cycle,” said Apolon Heringuer-Lisboa, founder and director of the Manuelzão Project, which is aimed at recuperating the Das Velhas River.

The main problem with the Das Velhas is that it runs through the metropolitan area of Belo Horizonte, the capital of Minas Gerais, and is therefore polluted with the city’s urban and industrial wastewater before flowing into the São Francisco.