Salvaging Waste Food for the Hungry in Spain 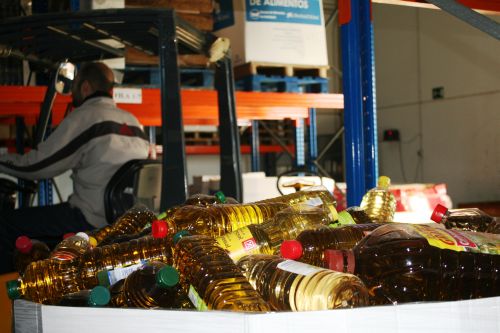 MÁLAGA, Spain, Dec 21 2012 (IPS) - A recurring question in crisis-stricken Spain is how to ensure that surplus agricultural products reach those most in need. One response is citizen initiatives to protest the waste of food and to advocate efficient management along the full length of the food chain.

“We want government agencies and private companies to take measures,” said Luis Tamayo, one of the promoters of “Comida Basura: Tu basura es mi tesoro” (Waste Food: Your Trash, My Treasure), a citizen’s platform combating food waste, created in Madrid in 2010. It promotes activities like collecting food in good condition that has been thrown out by supermarkets, asking for leftovers at restaurants and organizing soup kitchens.

Tamayo said “the laws on surplus food have been designed with an economic approach,” and producers and shopping centres are required to throw out tons of food still fit for consumption.

But those responsible for most of the waste in industrialised countries are consumers, who throw out perfectly good food on their plates or get rid of food that has gone bad in their larders through sheer neglect or for lack of a little basic planning before shopping.

A European Parliament (EP) report in late 2011 said that Spain wasted 7.7 million tons of food in good condition every year, an average of 163 kgs per person.

This squandering is at odds with the fact that over 21 percent of Spain’s 47 million people are living in poverty, according to the Economically Active Population Survey by the National Statistics Institute (INE).

The same EP report indicates that 42 percent of the 89 million tons of food wasted in the European Union comes from households, 39 percent from industry, five percent from the distribution system and 14 percent from other sources.

A special event was held on Oct. 21 in the northern city of Zaragoza, when around 1000 people got together for a lunch prepared from leftover food in good condition.

It was organised “Feeding Zaragoza”, promoted by the Aragonese Alliance Against Poverty and modelled on actions like “Le Banquet des 5,000,” held in Paris, and “Feeding the 5,000” in London.

As a result of the “impressive” popular response to “Feeding Zaragoza,” a campaign was launched to protest food waste and raise awareness, activist Sonia Méndez, who helped promote the event, inspired by Tristram Stuart, the author of “Waste: Uncovering the Global Food Scandal”, told IPS.

A study in May 2011 commissioned by the United Nations Food and Agriculture Organisation and carried out by the Swedish Institute for Food and Biotechnology (SIK) warned that 1.3 billion tons a year of food are spoiled or go to waste worldwide.

“How can we waste one-third of the food we produce when so many people are hungry?” protested Méndez, who said “we are living in a food bubble.”

FAO Director-General José Graziano da Silva said one-third of the food produced globally is thrown away, a quantity that could feed 500 million people.

People scavenging for food in the trash bins outside supermarkets are now a common sight in Spain, where more than five million people are unemployed.

Solving the problem of leftovers is “difficult” because making use of them “requires infrastructure and management,” and the laws “guiding and controlling the market make donating food difficult,” Javier Peña, head of Bancosol Alimentos, a food bank in the southern city of Málaga, told IPS.

“Our basic task is to find surpluses, make use of the most suitable items that would otherwise be discarded and act as intermediaries to distribute everything from fresh produce to processed and frozen foods,” said Peña, who has run the organisation for 15 years along with around 100 people, mostly volunteers.

There are 52 food banks in Spain, associated in the Spanish Federation of Food Banks (FESBAL). They are not-for-profit bodies run by volunteers who deliver food donated by firms and agencies to social assistance organisations for redistribution to the needy, in order to avoid waste.

Millions of tons of food fit for human consumption are wasted due to over-production, but also as a result of defective packaging, imperfections in shape or size, or short “sell-by” dates.

“For the last year-and-a-half an organisation has been coming to collect what we have not sold. We used to throw it out,” an attendant at a large commercial centre in Málaga told IPS as he removed several tomatoes from display “because they don’t look good.”

The EP report recommends modifying the “sell by” dating system that forces large quantities of food to be discarded, diversifying packaging sizes and introducing a food course in school curricula.

“One of the biggest problems is the squandering of food in homes,” said Peña. “Half of what is bought goes into the bin because people don´t check sell-by dates.”

“Many people are hungry and poor,” Roberto Suárez, the head of the Málaga Association of Ecuadorean Immigrants (ASIMEC), told IPS. Once a month, he and several fellow Ecuadoreans go to Bancosol to collect food and then distribute it to over 100 families of different nationalities.

On this occasion, Choro Sonko from Senegal, who works occasionally as a dancer, has joined them on the errand. She is an activist in Sunugal, an association through which she wants to distribute food to her fellow-Senegalese, “who are having a very rough time and feel ashamed for having to ask for food,” she said.

Food banks are currently overwhelmed by requests. “They are essential,” said Tamayo, who added that it is also necessary to raise awareness about efficient management of surplus food.