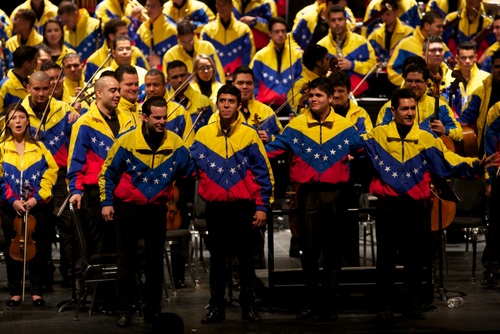 CHICAGO, Illinois, US , Dec 3 2012 (IPS) - A group of young people walk down the streets of Chicago, broad grins on their faces. They have good reason to be happy: the ovations received by their repertoire of Latin American music when they played in the Simón Bolívar Symphony Orchestra of Venezuela still echo in their ears.

They are conscious that they are professional members of an orchestra with sold-out performances wherever it appears – in Europe, Asia or the Americas.

The orchestra is also the foremost symbol of an orchestral and choral system – known simply as “El Sistema” – developed as a social and educational project, which has benefited some 400,000 children and young people in Venezuela, mainly from underprivileged backgrounds.

They have spent many years immersed in musical studies, like any virtuoso. But in their case they were first gathered together in regional music schools, and later on for public performances in the pyramid of children’s and youth orchestras of which they have now reached the pinnacle, the acclaimed jewel in the crown.

Commitment to constant study and teamwork is the key. First bassoonist Gonzalo Hidalgo, a 28-year-old from the state of Barinas in the southwestern plains, several of whose uncles are folk harpists, and who has just graduated as a medical doctor, sums it up.

“How did I manage to play in the orchestra and study medicine for eight years? Well, I gave up days off; while other people were at the beach or out dancing, I was dividing my time, asking professors to schedule me to take exams early, and they were understanding, because I think two out of three of my teachers were frustrated musicians,” he told IPS.

As a resident physician, his day at the University Hospital in Caracas starts at dawn. He attends patients until 11:00, when he rehearses with the orchestra for three hours, then returns to the hospital. At night he studies. When he travels, a colleague looks after his patients.

“I remember beautiful moments, like playing in the Acropolis in Greece or in the Berlin Philharmonic Orchestra concert hall, where I played a bassoon solo in Igor Stravinski’s Rite of Spring. But above all I appreciate what we have done in Venezuela to bring people to concert halls to hear classical music,” Hidalgo said.

Gabriela Jiménez, a 28-year-old cellist, lives in the busy centre of Caracas. “We belong to a demanding and very energetic orchestra, which moves sophisticated audiences like those in Italy or Germany, and defends our music, a Latin American repertoire,” she told IPS.

“I took music lessons when I was very young, and then I went to a núcleo (group) that was part of El Sisterma, and I won a place in the Bolívar Orchestra by audition in 2006. Once upon a time I wanted to be an architect, but now this is my world, everything is centred on the orchestra,” said Jiménez, who has a Master’s degree in Cultural Industries from the Complutense University of Madrid.

Mayerling Carrero, who is from the Andes on the southwestern border with Colombia, has 22 relatives who are musicians, 15 of whom play the trombone, including her brother Pedro who is the first trombonist in the orchestra.

It was natural for her to take up the instrument. “The trombone has seven positions; when I was a little girl I could only reach three,” she told IPS, laughing. Like her fellow musicians in El Sistema, she spent her mornings at primary school and her afternoons playing music. Later she completed a secondary school programme specialising in music, attended the University of the Arts, and joined the orchestra.

At 29 the mother of a 15-month-old daughter, Carrero is the only woman trombonist in the Simón Bolívar Orchestra, where she has played for 12 years. But she confidently says that “any girl who likes the instrument can play it, if she is willing to study, play and struggle.”

First percussionist Félix Mendoza also inherited a legacy. His grandfather Napoleón Baltodano, who arrived in Venezuela from Nicaragua in 1929, was a trumpet player and music teacher, composed meringues, and formed an orchestra in the Venezuelan plains region.

“They tell me I began much like other children, hitting pot lids with spoons in the kitchen,” he told IPS. “Later on I wanted to play the trumpet, but they told me I couldn’t because I was too small, and so it was easier to take up percussion, especially as an uncle of mine who was a drummer gave me lessons.”

His father, an evangelical pastor in El Tigre, a southeastern Venezuelan city dependent on the oil industry, “always supported my studying music, but was very apprehensive about whether it could really provide a livelihood and support a family. Now he can see that it is possible,” said the 27-year-old Mendoza, who is married to a violinist and is the father of a newborn daughter.

The 180 other performers in the Simón Bolívar Symphony Orchestra have similar stories. Their conductor, Gustavo Dudamel, another young man from the provinces who owes his stardom to El Sistema, is one of the most sought-after conductors on several continents.