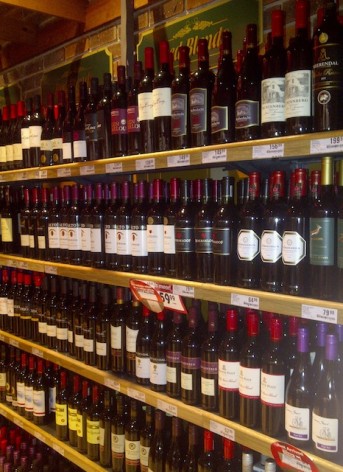 South Africa's BRICS positioning should be an immediate and massive boost to the wine industry. Credit: John Fraser/IPS

JOHANNESBURG, Dec 4 2012 (IPS) - South Africa and China are partners within a club of leading emerging markets, and it would seem natural that exports of South African wine to the Chinese market should be surging.

However, there is a feeling within the wine industry that not enough of the right support is being made available by the authorities.

Governments have made the political move to form the Brazil, Russia, India, China and South Africa (BRICS) alliance, but it could be argued that they should also be working just as hard to ensure that trade grows alongside political activity.

“South Africa’s BRICS positioning should be an immediate and massive boost to the wine industry – but it isn’t even felt as far as I can see,” warned Mike Ratcliffe, owner of the Warwick wine estate in Stellenbosch, in the heart of the Cape Winelands.

“An optimist might point out that there has been an increase in the number of litres of wine sold to China, but this would be misleading, as there is very little in the way of solid branded product with a reasonable expectation of sustainable growth.

“The majority of South African wines are priced at the cheap end of the pricing spectrum – giving rise to a risk of low-end perception formation, and doing damage to South Africa’s quality reputation,” he told IPS.

Ratcliffe was dismissive of the current activities by South Africa’s Department of Trade and Industry (DTI) in boosting wine exports to China, and he argued that instead all efforts should be focused through the industry export body: Wines of South Africa (WOSA). Mike Ratcliffe, owner of the Warwick wine estate in Stellenbosch,says that the majority of South African wines are priced at the cheap end of the pricing spectrum – giving rise to a risk of low-end perception formation. Courtesy: Mike Ratcliffe

“The DTI -sponsored trips to the Chinese market are poorly planned, poorly received, oft mocked by Chinese importers, and what I would consider an irrational use of state funds,” he complained.

“The DTI should be providing these funds to WOSA, who are professionally involved in specifically promoting the wine industry, and would be able to ensure that the funds are effectively and efficiently utilised.”

Cape Town-based TV chef and wine consultant Michael Olivier told IPS that there must be a more coordinated effort among all the South African role players for better sales of South African wine in China.

“I would hope that BRICS would assist, but it takes consistent marketing to break through,” he stressed.

“I think the industry has the clout, separately rather than collectively. WOSA needs to put their oar in too.”

Ratcliffe is worried that the industry “has yet to open a Chinese office, appoint a Chinese representative or commence any kind of effective media or marketing campaign in China.

“Generic export marketing funds should be forthcoming from Provincial and National coffers to support a labour-intensive industry.”

Johannesburg-based branding consultant and wine writer Jeremy Sampson agreed that the South African government’s support for the wine industry is not enough, and is not in evidence.

He stated: “Apparently they are busy, but where is the evidence?”

Sampson told IPS that there must be more imagination in promoting exports, and pointed to the growth in auctions of premium wine in Hong Kong, saying this is one platform which should be better explored.

Mike Ratcliffe remained convinced that exports to China can and must be boosted.

“For South Africa to be a recognised as a world-class wine producing nation, we have to have international exposure,” he explained.

“South African wine has the ability to be an effective national marketing tool which is positioned on the top wine lists of the world and on every supermarket shelf in the world.

“What better way to get a little piece of tangible South Africa to the world effectively and cheaply.”

Ratcliffe is convinced that the rewards could be massive, as China has virtually unlimited potential as a market for wine.

“Demand is enormous, interest in SA wine is untainted by historical perceptions, and quality is revered,” he said.

“South Africa has a unique opportunity to cash in on this demand and it would not take a massive stretch to achieve this.”

However, he said that South African wines have failed to make significant inroads into the United States “and we must be wary of missing and wasting the Chinese opportunity. Unless something changes, we will allow all of our competitors to bypass us in China.”

This view was shared by Sampson.

“The Chinese market is huge, and everyone else is there already,” he noted.

One challenge arises because there are hundreds of different South African wine producers and brands, but Ratcliffe argued that this is not unique to his country, and should not be a barrier to success.

“There are only a handful of South African winery operations that are sufficiently organised and sufficiently scalable to take advantage of the Chinese opportunity,” he argued.

“It should be these companies who enter China and create a beachhead which the rest of the industry can use as a platform.”

South African wines do not currently benefit from the advantageous import duties that many of the country’s competitors have negotiated through their free-trade agreements with Beijing, with Ratcliffe noting that, for instance, Australian wine exporters pay far lower duties than those from South Africa.

“The difference in import duties paid by South African wine compared to Australian wines is shocking and embarrassing,” he protested.