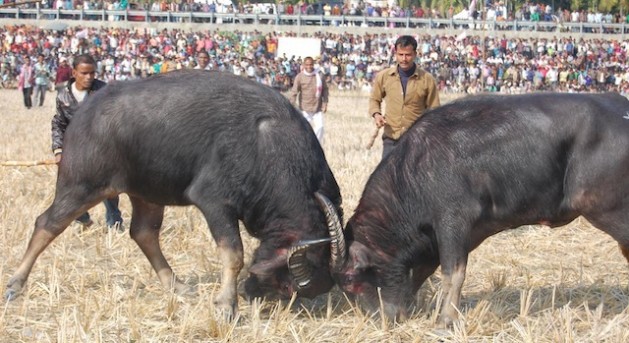 Thousands gathered in Ahatguri, 80km from Guwahati, capital of the easter Indian state of Assam, to watch a bloody buffalo fight to mark the harvest season. Credit: Pitamber Newar/IPS.

GUWAHATI, INDIA, Jan 13 2013 (IPS) - It’s the time of the year when people of Hajo, a small town 30 kilometres from Guwahati, capital of the eastern Indian state Assam, get eager to witness the famous Bulbul fight. The Red vented Bulbul is a familiar bird on the Indian subcontinent.

Assamese people celebrate Magh Bihu, the traditional harvest festival in mid-January, with feasts and merriment. A Bulbul fight has become a part of the ‘festivities’. At Nagaon, also in Assam state, it is buffalo fights that draw crowds.

The local temple committee in Hajo organises the fights between birds. Thousands gather to watch.

The fight ritual has faced continued criticism from animal rights activists. “We’ve tried to stop this cruel practice for a few years now but people think we are overreacting,” Sangeeta Goswami, chairperson of People For Animals (PFA), an NGO in Assam tells IPS.

The games, she says “cannot but be called pitiless.”

Buffalo fights are organised through the festivities in places like Ahatguri, Jamunamukh and Morigaon in the rural areas of Nagaon district, about 90 km from Guwahati. The PFA has campaigned actively against this practice. Animals are known to be killed sometimes in these fights, and bleeding and injuries are common.

The PFA has been unsuccessful. “We tried to engage lawyers to file a case but nobody was willing to take on the job,” Goswami says.

She says local people who enjoy this spectacle believe that unless they fight, “the buffaloes will go mad.” Many farmers believe that once the buffaloes are rid of the pent-up rage, they become tame and ready for the ploughing season.

Birds marked out for fighting are trapped from around the end of September, local people say. They are kept in bamboo cages and are fed local herbs mixed with wild banana and intoxicating drugs. They are then trained by the owners to fight one another, says a local resident who declines to be named.

The trainers are divided into rival clans, the Bharali-tola and Sonari-tola.

The enticement for the owner is ‘hero’ status and a hefty cash prize. The prize money has been increasing each year, local people say.

Konram Saikia (name changed on request), a local farmer, says he does not like the practice but is afraid to protest because he could be ostracized for going against a religiously condoned game. “People say it was started during king Rudra Singha’s time. Apparently, he was impressed by the sight of two Bulbuls fighting while he was visiting the Hayagriba temple on a pilgrimage. But even then why should we continue this today when people are more conscious?”

Rudra Singha is regarded as the greatest of the Ahom kings. The powerful Ahoms, originally from the Shan province of upper Burma (now Myanmar), ruled Assam for 600 years from 1228. This is considered a golden period in the Brahmaputra valley. Animal fights during festivities was a popular form of entertainment over this period.

The sports complex Rang-Ghar was built in the kingdom’s capital Sivasagar in upper Assam where royals and nobles watched buffalo fights, kite fights, cock fights and bulbul fights – besides others. Today buffalo and Bulbul fights are illegal under the Prevention of Cruelty to Animals Act, 1960.

The organizers at Hajo say that once the fight is over, the birds are set free, but activists are skeptical. “How do you know how these birds fare after this traumatic experience, or if they are accepted back by their flock?” Goswami says.

Goswami alleges that government officials are reluctant to intervene to end this centuries-old tradition. The plea is that such action would go against the ‘sentiment’ of the people.

Goswami says that unless local people cooperate and there is more effort to create awareness, such practices will not end.