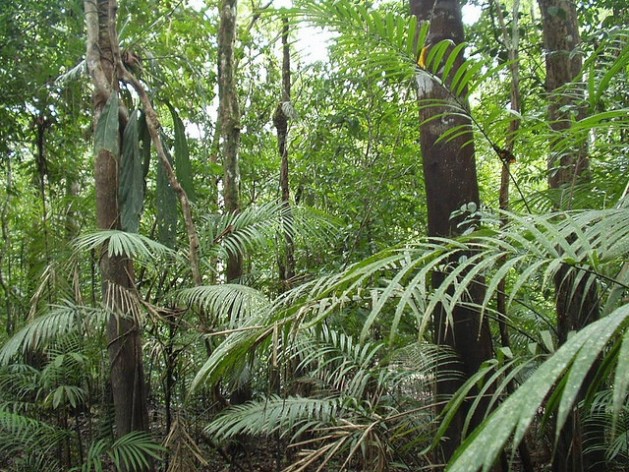 A view of the Peruvian Amazon. Credit: Jake G/CC-BY-SA-2.0

LIMA, Jan 17 2013 (IPS) - Peru’s economic growth is largely dependent on its wealth of natural resources, which provide over 50 percent of the country’s gross domestic product (GDP) and 80 percent of exports. In view of this fact, the government is developing a project for the valuation and protection of this natural bounty.

“There is a natural infrastructure tied to the physical infrastructure, which the state must protect,” Fernando León, an economic incentives advisor to the Initiative for Conservation in the Andean Amazon (ICAA), told IPS.

By way of example, he noted that “if you only worry about the pipes and other infrastructure for a drinking water treatment project, and not about the river basins that provide the water that will go through the pipes, then what will you treat for the population to drink in the future?”

Until late 2011, León headed up the Ministry of Environment’s Department for the Assessment, Valuation and Financing of Natural Resources, where he advocated the promotion of projects for the protection of these resources under the National System of Public Investments (SNIP).

His successor, Roger Loyola, who has continued with these efforts, announced that by the end of the year, a so-called “Green SNIP” will begin to operate.

Loyola and his team have been working in coordination with the Ministry of the Economy and Finance (MEF), which oversees SNIP, to draw up the guidelines, conceptual framework and terms and conditions for the environmental projects envisioned.

This process has posed a challenge for the financial specialists, because they have had to demonstrate that these initiatives will be economically profitable for the country, for example, by demonstrating the economic benefits of protecting an endangered species, explained Loyola.

During this stage, projects are being studied in the areas of biodiversity, climate change, land management and zoning, and protected natural areas, all of which fall under the remit of the Ministry of Environment (MINAM).

Sources at the MEF investment policy office told IPS that “the first step being undertaken is to assess which of all these projects qualify as public investments.”

Once a conceptual consensus has been reached within MINAM to serve as a reference for other sectors and the environmental and economic considerations have been reconciled, they will move on to developing the guidelines and methodology for the design and approval of individual projects.

However, speaking with IPS, Chávez warned of the danger that the government will make the mistake of taking environmental issues into account only with regard to investments in conservation projects, “when the environmental component should be mainstreamed in all of the projects presented by all sectors of the state to ensure that they are sustainable.”

León, for his part, stressed that the specific projects promoted by MINAM should be seen as a first stage, since he knows first-hand from his experience promoting the development of a Green SNIP as a public official that it will not be easy to convince the Ministry of the Economy to take this step.

But despite this resistance, he noted, a number of “green” projects are already being undertaken by the MEF.

Last September, at a regional workshop on financing for biodiversity public policies and conservation in the Andean Amazon, Mónica Muñoz Nájar from the MEF investment policy office announced that 15 environmental projects were being carried out under the SNIP.

These include a project undertaken by the government of the northern region of San Martín for the recovery of ecosystem services that provide water for the population.

Loyola reported that there are high expectations among regional governments planning to submit environmental projects for financing under the Green SNIP. León added that initiatives should be prioritised as soon as the new system is up and running, “because what we consume in the cities is connected to rural areas, to what is in the interior of the country.”

The experts believe that reports should be prepared on an ongoing basis to demonstrate the benefits provided by environmental resources and the losses incurred when the environment is mistreated, in order to dispel the myth that nature’s resources are freely available and infinite.

In an analysis of the environmental situation in Peru in 2007, the World Bank concluded that the environmental damages inflicted on this country have an economic cost of 3.9 percent of GDP and primarily affect the poorest sectors of the population.

An inter-sectoral committee comprising 28 institutions and headed up by the Statistics and Information Institute (INEI) was launched in Peru last August to establish a system of “green accounting” that contemplates environmental degradation, water and forests, with technical assistance from MINAM.

The goal is to “incorporate environmental variables into national accounting practices,” said Araceli Urriola, an environmental accounting specialist at the Department for the Assessment, Valuation and Financing of Natural Resources. “In other words, the supply and demand (in environmental terms) of all economic activities,” she told IPS.

Mexico, Guatemala and Colombia have made significant progress in this area, noted Urriola. In Peru, however, this process of valuing environmental benefits and losses and establishing a green GDP is just beginning. The members of the inter-sectoral committee are expected to meet before the end of this month to agree on a work plan, the INEI told IPS.

“Environmental impacts are cumulative and are not always felt immediately. Because of this, some governments have not placed any importance on conservation and preservation. That is why, through the valuation of environmental damage, we hope to highlight the importance of conservation, because otherwise, we will pay for it tomorrow,” stressed Loyola.